Stella Nyanzi grilled for six hours at CIID
Next Story

Voting started well, until mid-day when the computers failed to work in different polling stations.

Voting started well, until mid-day when the computers failed to work in different polling stations.

Students lining up to vote before the machines collapsed. Pictures by Abbey Ramadan

Kyambogo University students have been left stranded after the machines that were used in the electronic voting system jammed. The university students were electing guild president, guild representatives and hall chairpersons. The guild race attracted eight candidates, including Patricia Kishemeire, Joseph Ochieng, and Brian Ashaba.

Voting started well, until mid-day when the computers used in verification and voting failed to work in two polling stations of faculty of engineering and management as well as entrepreneurship. The students started shouting on top of their voices, others struggled to take the laptops that were being used in the election process, but their efforts were hindered by the Police intervention. Earlier on, the university electoral commission general secretary, Hamza Mukiibi, had said the system will improve on the transparency and fairness of election. He also said students had been sensitized and trained on the use of the machines although he said the machines are taking a lot of time.

How they were voting

"After voting, the student prints out hard copy of the card and takes it to the secret box," said Fahad Seguya, the presiding officer at faculty of management and entrepreneurship. He added that the polling assistant writes one the voters thumb with an ink mark to indicate that he had voted.

Hadn't been the intervention of Police, the New Vision photographer Abbey Ramadan could have suffered mob justice by the unruly students who scrambled to take his camera while he took pictures of the chaos. The Police intervened and took the camera to save his life later the camera was given to him. 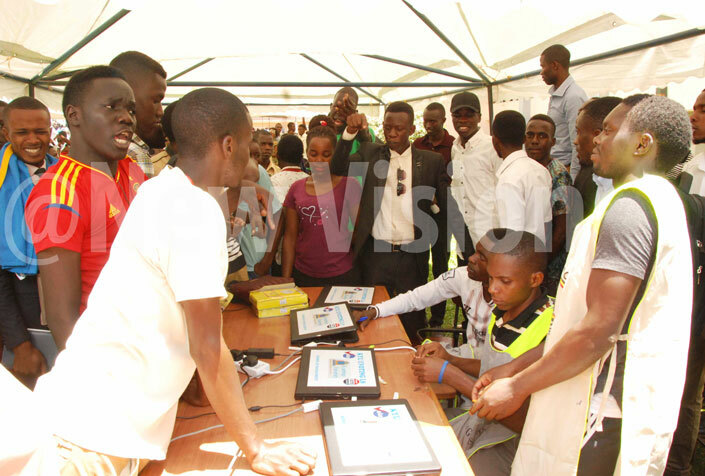 Students reacted differently following the failure of electronic voting, some insisted that voting be postponed, whereas others wanted the machines to be worked on and they continue voting.

Enock Tibategereza, the coordinator for procurement class at the university, noted that he is not sure of the safety of the votes in favour of his candidate. He said by the introduction of the electronic voting; he thought they would save time, but it has not worked.

"If the machines have failed, let's use our traditional ballot box system otherwise my candidate may lose out," he stated.

Victory Nabbanja, a third year student of community based rehabilitation programme, said she doesn't support the postponing of election arguing that it will affect the entire university programme.

"Even if the machines are worked on now, not all students will vote. Postponing will also affect the entire system of voting," she stated.

Nicholas Mercy Olinga, who is contesting for the position of guild councillor representative of non-residential students, said over a third of students may fail to vote because of the electronic voting system. He said apart from jammed machines, students did not get ample time to train and get skills on how to use the machines.