Pupils packing their mattresses after their school was closed. Photos by Davis Buyondo

Studies for more than 15,000 pupils in Rakai district have been interrupted after education authorities closed more than 100 schools.

The widespread operation begun on February 15, targeting private schools with poor sanitation, congestion, unqualified teachers, and lack of licenses among others.

It's being conducted by the Deputy Resident District Commissioner, Geoffrey Muchunguzi, District Education Officials, police and other local authorities. 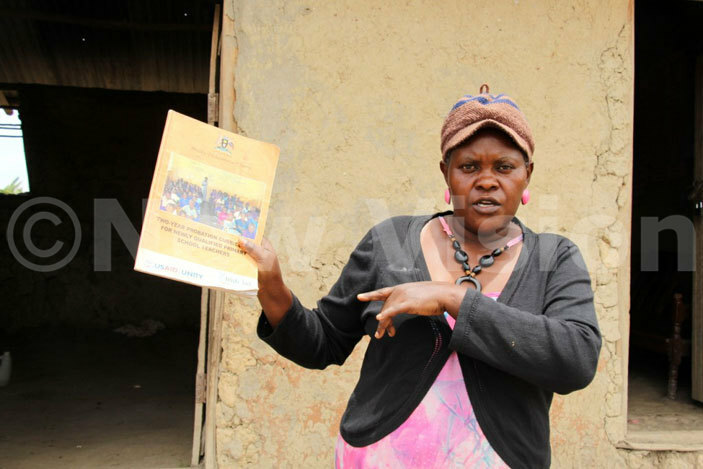 Most of the charity schools in hard to reach communities were in a very appalling condition. Each of the ill-fated schools has at least an average of 100 pupils.

Mathias Kigoye, the District School Inspector (DSI), said they have conducted the inspection in 11 sub-counties so far.

Kigoye said that they enforced total closure of substandard schools since most of them had very old, dilapidated and weak structures and poor hygienic conditions which would affect the health of school children.

He explained that a standard school must have a good learning environment, good classrooms, sitting and writing space, instructional materials, co-circular facilities, spacious dormitories, trained teachers, overall management and others.

"Some schools had both nursery and primary sections, but we reduced their licenses to only operate nursery. Even for the boarding section, students would sleep in the classrooms at night, which was not right," Kigoye recounted.

He added that a similar operations in Rakai was last conducted in 2014, but was frustrated by politicians. This time, he said, "given the fact that we have engaged all the district authorities and stakeholders, we hope to achieve great success."

Harriet Namayengo, the secretary for Education, Gender and Health, said in some schools, girls and boys were sharing one congested room and mattresses, which was very tempting since they are adolescents. She explained that other schools lacked toilets, classes, benches and other lacked beds.

Namayengo explained that in December 2016, education authorities passed a warning to all school proprietors to rectify certain things to avoid inconveniences when the operation kicks off in February 2017.

According to Abu-Baker Mutaaya, the District Education Officer, such poor schools have always affected pupils' performance in class.

He added that the operations were a ministry of education directive, which will continue until the schools improve. He said that the closed schools will be reopened upon critical re-inspection.

However, parents and guardians have condemned the operation, saying it has greatly affected their children, yet some had paid school fees.

Rachael Nalubega of Kasaali said her four children are now stranded at home since the school where they studied was closed.

Janat Nakalanzi of Kyotera said she had just paid for her children's meals when the district authorities closed the school. However, she added that she is too poor to transfer her two children to another school, which is in operation.

Closed schools defy order
More than 10 schools have defied the closure and reopened to teach without the authorization from the authorities.

School directors, who preferred anonymity, told the New Vision that they defied the order because the exercise was very selective.

They said that the education authorities left schools in very bad condition to operate and closed theirs which were in a better state.

"This posed many questions why the worst schools are let to operate. It seems most of them paid a bribe to be cleared. We will not comply by the directive." One of the school proprietors said.

Robert Benon Mugabi, the Rakai LC5 chairperson, said that the school proprietors who defy the directive would face arrest.  He explained that the ill-fated schools must write to the RDC for re-inspection and verification before they re-open.

He made me hate men, love and relationships