AFRICA CUP OF NATIONS: SEMI-FINAL I

I'll be back several hours from now for the second semi-final that pits two continental giants in the same arena. See you then! 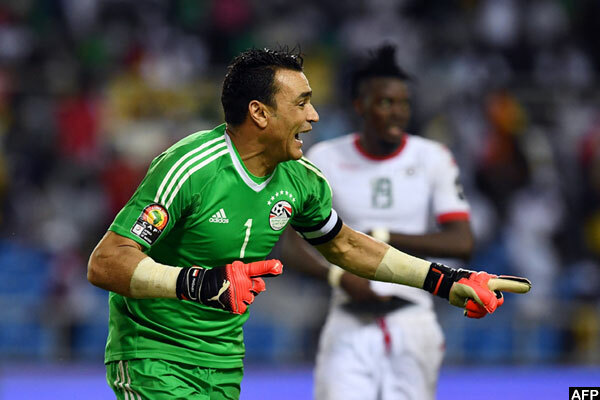 This will be a night to forget for Burkina Faso star Bertrand Traore after his penalty was saved. So how did the penalty shootout unfold? Next, Alain Traore, who came on in extra-time in place of goal scorer Aristide Bance, tucked his in (1-0).

Ahmed Hegazy made it 2-2 as Steeve Yago bea the keeper to make it 3-2.

Mohamed Salah, who had scored for Egypt in open play, was on target again from the spot (3-3) before Burkina Faso keeper Koffi had his take saved by his opposite.

Amr Warda, a 74th-minute substitute, gave The Pharoahs the lead for the first time in the shootout before Traore had his penalty saved by 44-year-old Egyptian keeper Essam El Hadary to spark wild celebrations within the Egyptian camp and back home in Cairo.

The chance to play in the final may have slipped through their fingers, but for Prejuce Nakoulma and co., not all is lost. If it's any consolation, there is still the third-place to play for on Saturday.

The Stallions will play (on Saturday) the losers of Thursday's Cameroon v Ghana second semi-final. 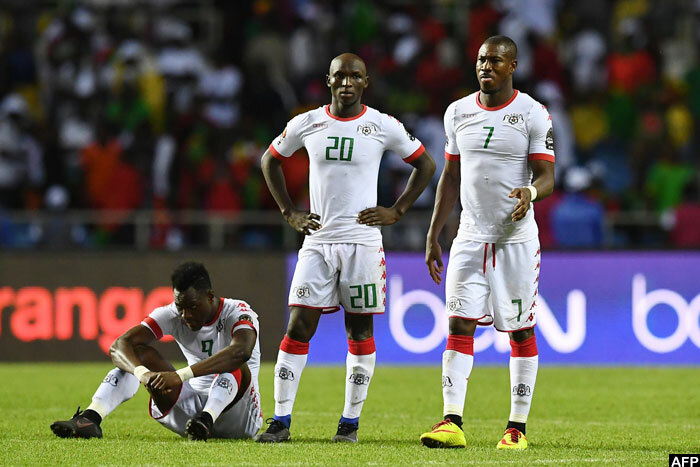 It's contrasting scenes inside the Stade de l'Amitie. Understandably so . . . 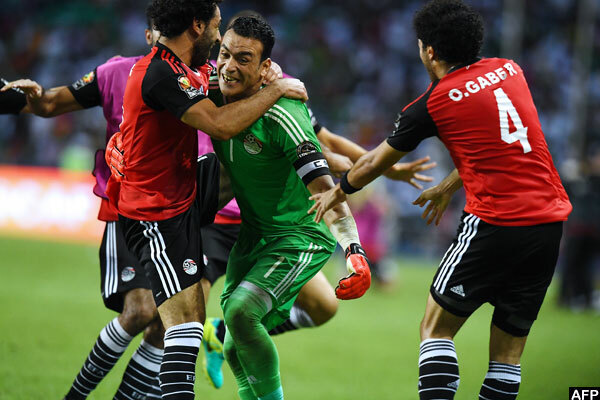 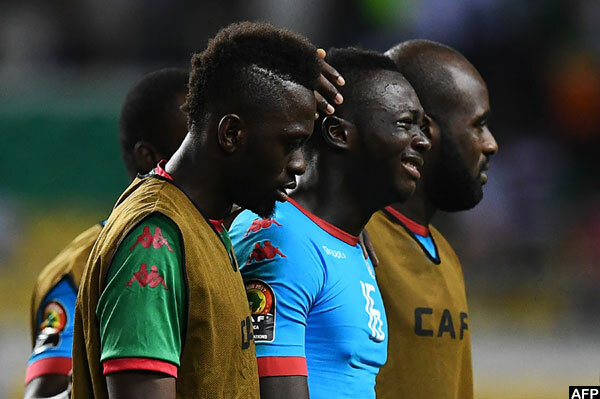 EGYPT THROUGH TO FINAL 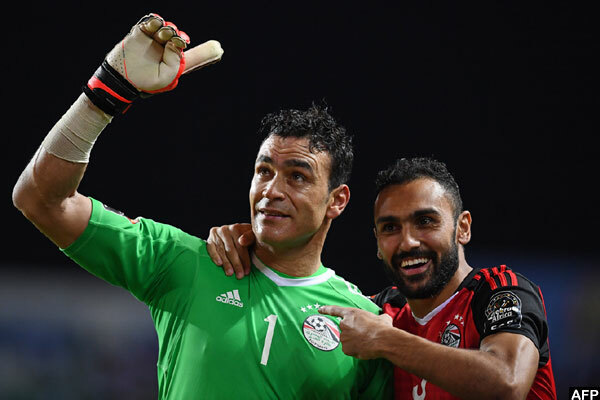 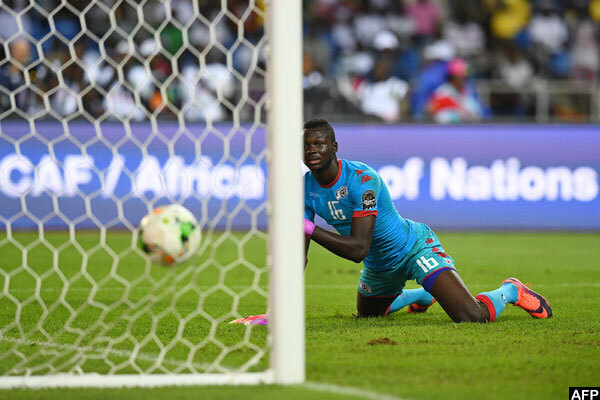 And after two hours of absorbing football, the first semi-final of the 2017 Africa Cup of Nations will be decided by penalties.

Bance might have been substituted but Burkina Faso still carry a lot of threat going forward.

They work something out within the area but Traore's drop ball is overcooked. Close!

This leaves two Egyptian defenders in a heated exchange between themselves. Tired legs, tensions boiling over. Ingredients of an entertaining African semi-final. 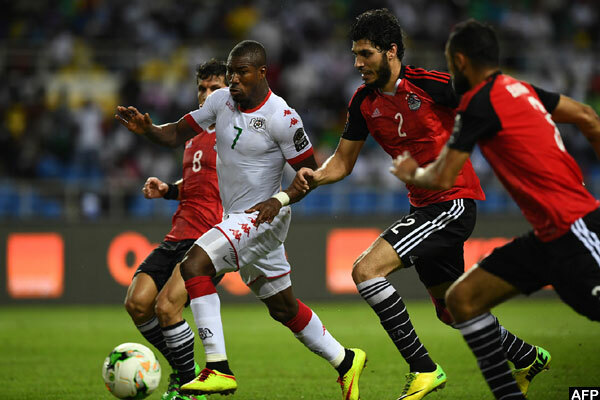 We are nearly there. Penalty shoot-out, I mean. But many nails will be spared that torture if a winner can be found in the next 15 minutes of the extra-time.

Such an absorbing game! 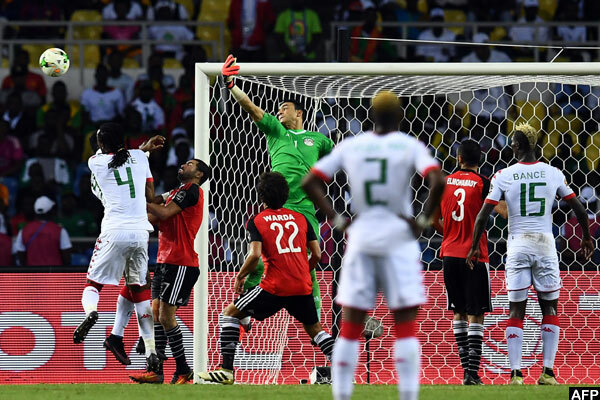 Steeve Yago is the second Burkina Faso man to go into the referee's book, and the fourth player in this game.

Aristide Bance has played a big part in Burkina Faso's attack. Again, he is played in by Traore but his shot is very poor and hits the side-netting. You can't blame him though. The angle was too tight.

We'll have thirty minutes of extra-time now, split into two halves. If no winner is  found here, we will go for a penalty shoot-out. Juicy!

There you go. It's not done yet.

We shall have some extra action on the pitch to decide who goes into the final. 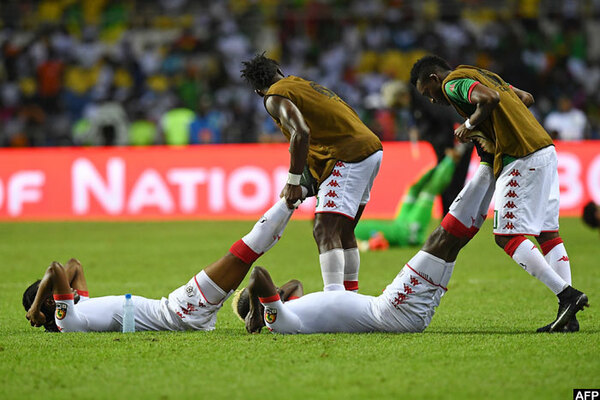 The Stallions, keen on ending this as a contest here and now, are awarded a free-kick right on the edge of the box.

Goal-scorer Bance towers over the still ball. Then the attacker with the distinctive mohawk takes a ground shot which the Egyptian 44-year-old keeper collects, only just, and is hit in the process.

He will need some swift medical attention as three minutes of added time are announced..

Can we see a late winner here?

Ten minutes are left on the clock. Who will go for the jugular?

We've seen Egypt kill games off in the late stages, including against our very own, Uganda, in the group stage. Can they replicate that here? 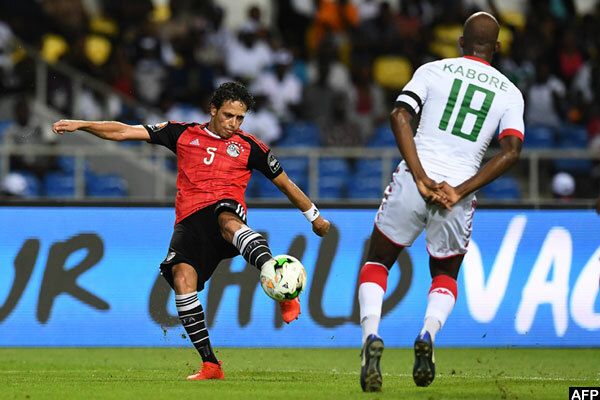 And the floodgates burst open!

Aristide Bance brings the game back to level terms with a brilliant finish.

Great build-up that has Charles Kabore on the end of a well-worked backheel. He knows the big man is in there, he is right. He dips the ball in, finding Bance who chests the ball to the ground and wastes no time in hitting home. Great goal. Egypt finally concede a goal in this tournament.

It's him again. Mohamed Salah!

In a rare Egypt attack, Mahmoud Kahraba does well to hold off his minder, facing away from goal. He places the ball invitingly for Salah who curls into the top left-hand corner, beating Herve Koffi Kouakou.

Headed for a 12th final, The Pharoahs? They will be there, if they protect their lead in the next 25 minutes. 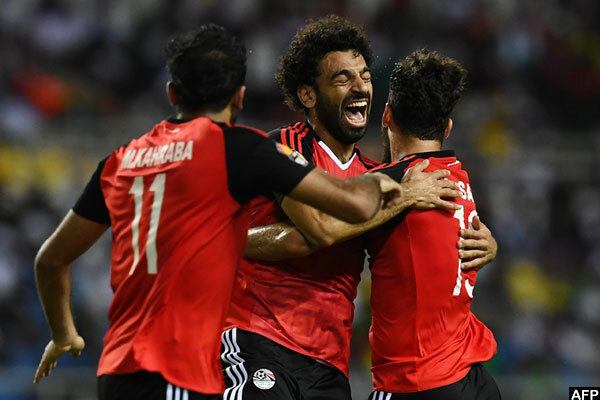 As we hit the hour-mark, the script is similar to that of the opening half. The Pharaohs, who are chasing their eighth title, have nothing on The Stallions who are galloping past them in many of the departaments here.

The only thing we are yet to see is the back of the net rattled.

Second booking of the night.

Mahmoud Kahraba elbows Issoufou Dayo during a mid-air challenge for the ball. He receives a yellow-card for that contact. He will miss the final, if Egypt go through, because this is his second yellow in back-to-back games.

Again, Ali Gabr is involved. Prejuce Nakoulma is played in into the box. He tries to dance past his minder before chipping the ball which, on first sight, appears to have come off Gabr's hand. Was that his chest? Shoulder?

The referee won't hear any of the the penalty appeals by the Burkinabes.

Burkina Faso pick up from where they left off. Bance, who has been ubiquitous in tonight's game, bolts down right, forcing Ali Gabr to handle the ball just outside the box. It takes the Senegalese referee some time to react, although the linesman had his flag already up.

Free-kick given. Traore is the man behind it. Takes it. But the dipping effort bears no fruit.

This time, it's Egypt that get the ball rolling.

At least a goal will have to be scored tonight for one team to progress to the final. 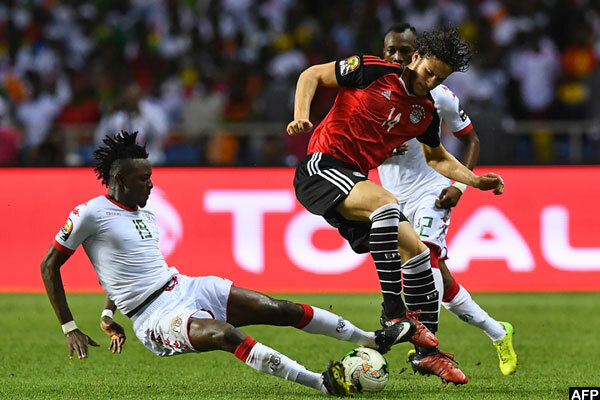 Clearly, Burkina Faso have been the brighter of the two sides in the first half. The stats agree:

That's what the opening stanza has had in stock for us: scoreline intact.

Teammates Bakary Kone and Yacouba Coulibaly clash mid-air. While both men have hit the ground hard, Kone picks himself up swiftly while Coulibaly stays on the ground, prompting the medical team to dash onto the turf and deliver some treatment. The 'magic spray' is applied but the injured man will have to be helped off the pitch for further assessment.

And the first booking of the day goes to Egypt's Ahmed Fathi for body-checking Bertrand Traore who goes crashing hard on the semi-damp surface.

Despite Fathi's protests right in the face of the referee, he won't escape this one. Yellow-card! 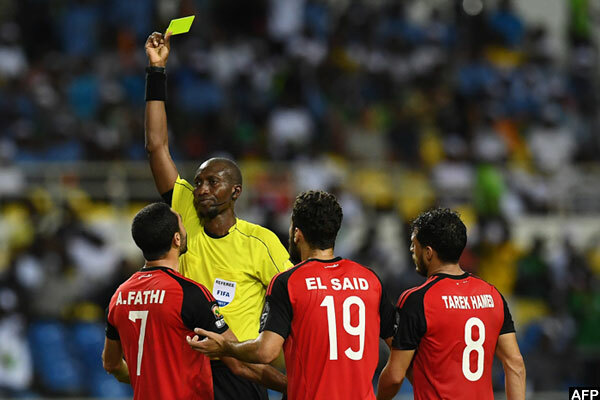 Aristide Bance and Prejuce Nakoulma, as expected, have been causing all sorts of problems for the Egyptian back.  They link up once again but Nakoulma, who is the last man on the exchanges, hits straight into keeper Essam El Hadary's hands. No problem for the record-holding goal-stopper.

We've hit the half-hour mark and I must say it's The Stallions that are dominant.

They have sustained their pressure against Hector Cuper's men, eventually seeing Ali Gabr lucky to escape a booking after clattering an opponent. He is cautioned by Senegalese referee Malang Diedhiou. The resulting free-kick comes to nothing. Burkina Faso have never beaten Egypt. Can this be their night?

So far, they will have been pleased with their performance as they have managed to enjoy plenty of the ball in contrast with the Egyptians who have been relying on the counter-attacks for these opening 26-or-so minutes. 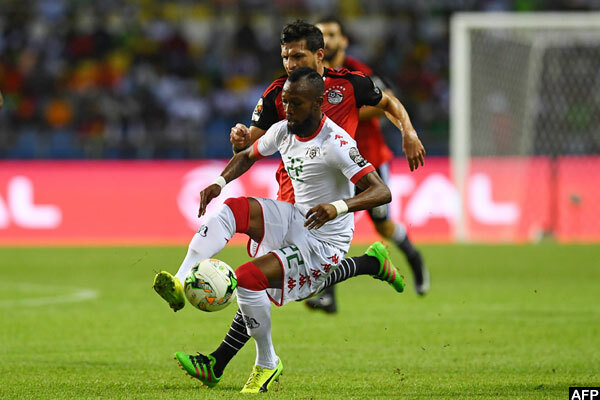 The Stallions are looking very confident against their seven-time-champion rivals.

Bance, who scored Burkina Faso's winning goal in their quarter-final, is in the box and ready to be fed. He gets the food: a dip of a cross, which he invitingly receives with his chest, then head, and finally under pressure from Ahmed Hegazy, executes a volley which does not find the target. Great acrobatics.

This duel is beginning to open up.

First, Prejuce Nakoulma works his way out well to feed in Aristide Bance who, upon some instinctive thinking, tries his luck at goal from several yards outside the area. But his adventurous effort whispers shy of goal. 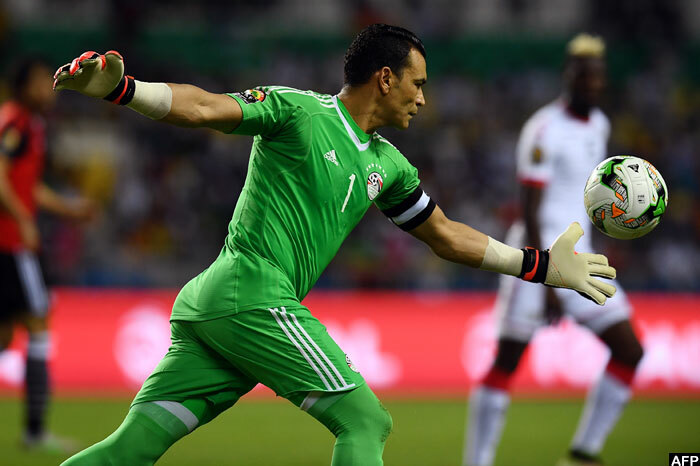 A minute later, the Pharaohs on the counter-attack. Trezeguet, up on the front left flank, is the man on the end of the pass. He does what Bance had tried on the other side, but his brave shot goes off target.

What that effort does though is to draw Burkina Faso keeper Herve Koffi Kouakou into his first meaningful action of the game.

Essam El Hadary is again called into action to make a vital save from what had initially appeared to be a simple effort towards goal by Abdou Razack Traore.

That would have been an awful goal to concede. It's still all-square though.

It's an even start to this semi-final as both sides are happy to knock the ball around.

We've seen some nifty footwork from the Egyptians inside their opponents' box moments before dangerman Prejuce Nakoulma makes a sprint towards the other end but his weak cut-in makes for easy picking for 44-year-old veteran keeper Essam El Hadary, who is the captain for the Pharoahs.

And we are under way inside a half-filled Stade de l'Amitie. Burkina Faso get the ball rolling.

Time to clear your throats and polish your voices for the respective national anthems. First up, Burkina Faso's Une Seule Nuit, then next is Bilady, laki hubbi wa fu'adi 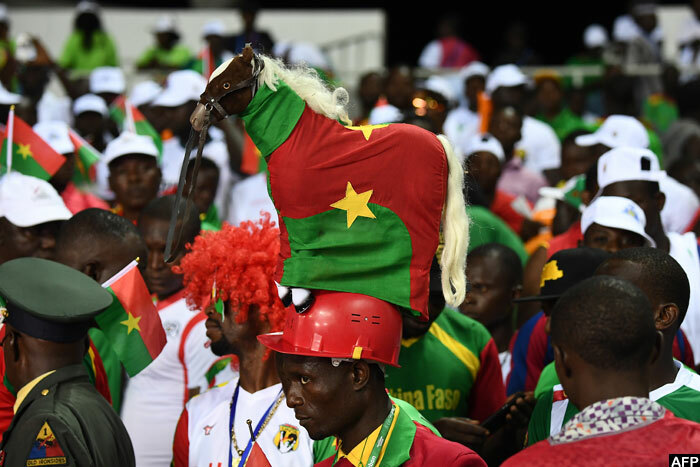 It's time for some final-four action, ladies and gentlemen.

Here are the starting line-ups for both teams.

Hello and welcome to this live text commentary of tonight's first semi-final of this edition of the Africa Nations Cup.

Hector Cuper's men, the Pharaohs of Egypt, are chasing a record 8th title while Paulo Duarte's The Stallions of Burkina Faso are galloping towards their first ever glory of this tournament.

So, before title no.8 or no.1 respectively can be realised, there is this little matter of a semi-final they will have to first take care of. Will it be a scramble to the final or will it be smooth-sailing for the finalist-to-be?

It's going down tonight.

A spicy affair it promises to be.

So, who will reign supreme? 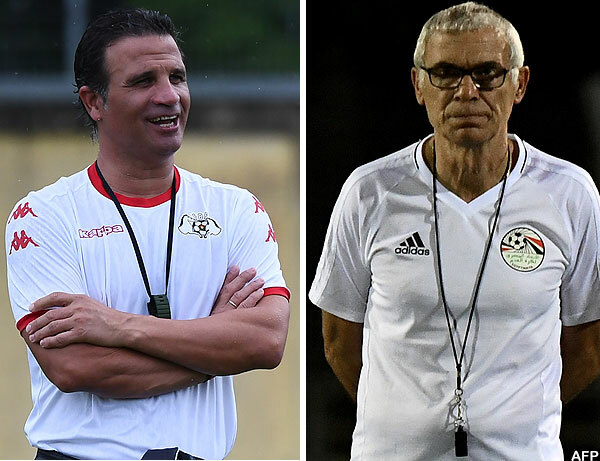 A Ghanaian journalist thought he had floored Uganda Cranes captain Geoffrey Massa when he put it to him that he is past his best.

"It is coming to two years since you scored for the Cranes. So why should we expect much from you?" he asked as everyone went silent in a pre-match press conference.