Amb. Tibaleka presented his letters at an official ceremony; full with military honours in Warsaw.

Amb. Tibaleka presented his letters at an official ceremony; full with military honours in Warsaw.

Amb. Tibaleka presented his letters at an official ceremony; full with military honours at the Presidential Palace in Warsaw, Poland. President Duda warmly welcomed Amb. Tibaleka and pointed out that cooperation between Uganda and Poland was developing constructively and in mutually beneficial ways.

He said that he looked forward to having wide-ranging economic relations between the two countries. He said that a number of Polish enterprises had started to explore the Ugandan market. 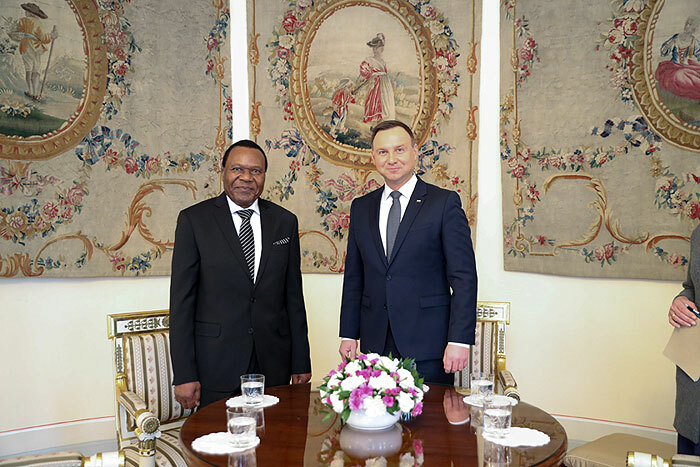 One Polish firm, URSUS, is in the process of setting up a tractor assembly plant in Uganda to provide affordable tractors and farm machinery needed for mechanisation of agriculture in Uganda.

Amb. Tibaleka conveyed greetings and a special message from President Museveni to President Duda. He reiterated Uganda's strong desire to further strengthen its relations with Poland in all areas, especially trade.

He pointed out that though small, the volume of trade between the two countries,  is increasing year by year.

Amb. Tibaleka is Uganda's ambassador to the Federal Republic of Germany resident in Berlin. He also represents Uganda in Austria, Czech Republic, Hungary, The Vatican, Slovakia, Bulgaria, and Romania. He is also Uganda's Permanent Representative to the United Nations Agencies in Bonn and Vienna.