An aerial view of Mbarara University of Science and Technology

A total of 1,188 graduands received diplomas, bachelors, masters and PhDs degrees at the 23rd graduation ceremony of Mbarara University of Science and Technology (MUST).

Of these, 486 (41%) are female, while 703 (59%) are males. Nine of the graduands got post-graduate diplomas, 120 masters and eight walked away with PhD degrees. At the undergraduate level, 25 were awarded diplomas and 1,027 received undergraduate degrees.

Buhweju MP Francis Mwijukye, was among those who graduated. The event, which took place at Kihumuro campus grounds on Saturday was attended by hundreds of people. Education minister Mrs Janet Museveni, who was supposed to be chief guest, was represented by higher education state minister John Muyingo.

In a speech read by Muyingo, Mrs Museveni paid a glowing tribute to President Yoweri Museveni for realising that MUST was a necessary institution which has become a catalyst for the higher education boom in Uganda.

She urged the university to take a more proactive approach to understanding national priorities in education, training and research.

She was pleased to learn that MUST was complying with the presidential directive on reorienting their programmes to avoid those that do not meet the expectations of the fast changing world.

She said her ministry would like to see the Kihumuro campus expand in terms of facilities and programmes in science and technology.

She urged graduands to widen their mindset and be quick to adopt survival principles that will enable them adapt to the changing times.

"Graduands be truthful, ready to learn, unlearn and relearn. Life is precious, remain guided and guarded. Make a personal commitment to remain alive so as to use your knowledge to make a meaningful contribution to self and the communities you are returning to," she added.

She promised that the Government would continue to support the University in its endeavours. She also thanked the management and leadership of MUST at all levels for being pacesetters. 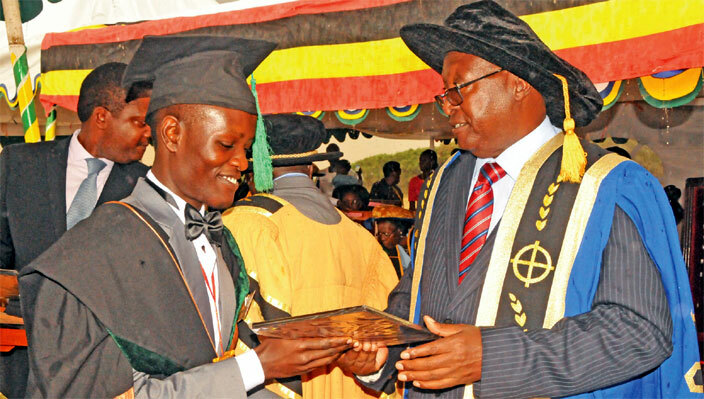 The university's chancellor Prof Peter Mugenyi congratulated the graduates for their impressive achievement and said this shows they are the best proof of MUST's great success and living testimony of its motto.

He saluted the Government and the education ministry in particular for the strong commitment in ensuring that MUST remains a soaring colossus in training.

"Embrace a new attitude that is aware of the challenges in the world of work, be quick to adjust to new realities and adopt new skills, explore the innovative (spirit) in you and settle for something. The beginning is always hard but with principled and focused determination, you all here can become the next generation of job creators," Mugyenyi said.

The University's vice chancellor, Prof. Celestino Obua urged graduates to be good ambassadors of the university and role models wherever they go and must strive at all times to promote a sense of high integrity and moral values.

He urged the graduates to avoid things and behaviour that will cut short their participation in shaping the future of their nation. He said, "‘Life is 10% what happens to us, and 90% how we react to it'. The great thing in this world is not so much as where you stand as in what direction you are moving."

Mugyenyi acknowledged the strides that the university is making and appreciated the collaboration leaders who supported the university, especially during the time when it was beginning who included the late Fidel Castro former president of the People's Republic of Cuba.

"One leader despite his country's constrained resources boldly stood in support of Mbarara University, that leader was Fidel Castro of Cuba. We recalled that without Cuban support it would have been just that," Mugyenyi said.

"President Castro left a will stated that there should be no monuments on naming of streets or buildings in his names. Although it would have been most befitting to name a building here at MUST of a square in his name we shall comply with his wishes," he added.

MABARARA UNIVERSITY OF SCIENCE AND TECHNOLOGY

If Kagonyera doesnâ€™t jump, push him