Museveni calls for regional force to flush out LRA remnants

President Yoweri Museveni has called on regional leaders engaged in the fight against the Lord's Resistance Army (LRA) insurgency in the Central African Republic to commit themselves and allow military commands to jointly work out a plan to flush out remnants of the LRA and put an end to the suffering of the civilian population.

That is not strength; it is a weakness but it embarrasses governments because then they are not protecting their people enough. This is dangerous because it still attacks civilian populations," Museveni said during a meeting of regional leaders held at the sidelines of the ongoing 28th Ordinary AU heads of State and government Summit at the AU headquarters in Addis Ababa, Ethiopia.

"They (LRA) have been downgraded. Our concept of counter insurgency is for mobile forces to go in to hunt the terrorists by foot and chopper etc. Once we receive credible intelligence information, we must move in day and night and hunt them down.

After, we must have a zonal force which remains there. The force must be disciplined…not killing, looting, raping women or talking badly to the people. This will give confidence and security to the people," Museveni said.

The regional leaders are frustrated that despite a strong regional effort to deal with Kony and his LRA, the lack of a decisive action to deal with the remnants has led the insurgency force to continue wreaking havoc among the civilian populations and in the process prolonging the war.

Ambassador Smail Chergui the AU Commissioner for Peace and Security said the humanitarian situation caused by the LRA has worsened despite the elimination of the LRA from CAR leading to a secure country.

"The elimination of the LRA has led to a secure country and the insurgency force has been reduced to about 150 - 200 men including their dependants. The 120 armed fighters frequently move between the DRC, CAR and South Sudan with their main source of livelihood in Garamba Forest in the DRC where they hunt down animals for ivory and loot gold and other minerals from miners. The LRA has made it impossible for communities to do their daily activities" he said.

Kiir said the LRA coupled with negative forces have forced populations from his country to flee into northern Uganda causing a humanitarian crisis. 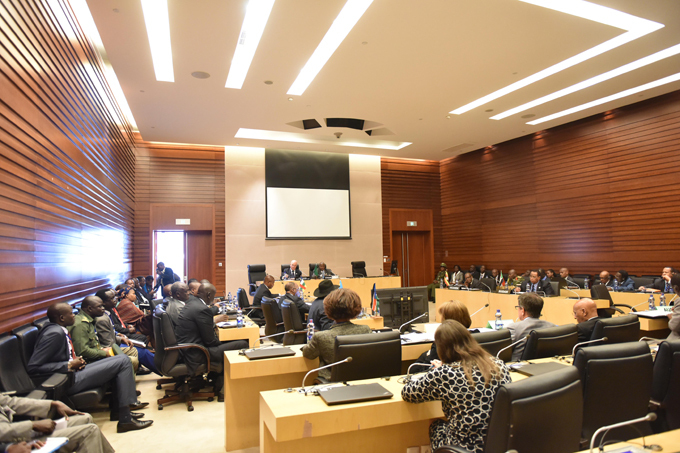 Touadéra said since the operation in Garamba forests, the LRA broke out in several groups creating havoc in the region. He said despite their capability being reduced due to the presence of the regional force, essential activities of the LRA still happen in CAR and the embargo on CAR arms has made it difficult for the country to reinforce its security.

Museveni urged the international community to support the regional force to flush out the LRA remnants and put an end to the war by supporting their efforts through reinforcements of multiplier forces like helicopters, airlifts, a disciplined army, relief and aid support and infrastructure for both populations and army to move.

"Accurate intel both human and technical is critical. Kony can't use satellite or mobile phones, not even radios, we can locate them. We need cross-border cooperation and aid and relief for the affected people," Museveni said, adding that he supports the lifting of the arms embargo on CAR to allow its forces build its capacity.

"I agree in principle, the joint regional effort has been critical but efforts are not enough and not complete. We still have a big problem because there are gaps we leave behind. 120 armed people are still dangerous" he said.

The meeting agreed that the Minister of the DR. Congo be allowed to consult President Joseph Kabila on cross border cooperation in the Garamba Forest.

They also agreed that the AU commissioner follows up with the respective governments on the military command of each country to work out a plan to make a final push and end the LRA insurgency.