'Never take your livelihood for granted'

"Up until the age of 15, I idolized a man called Saku, then a prominent commercial farmer in Kawuku."

"Up until the age of 15, I idolized a man called Saku, then a prominent commercial farmer in Kawuku."

Patrick Iga (pictured) is the CEO of Farming Consult and Management Company (FACOM) Uganda, an independent company that owns farming property, carries out farm management, tours and consultancy as well as soil testing and analysis. He won Vision Group's best farmer contest in 2014. He spoke to Sebidde Kiryowa about what makes him tick.

In one word, describe yourself

"Determined". I was a progressive trader in Kikuubo (a business hub in Kampala city) as well as a manufacturer for domestic and hair care products. These products were quite lucrative. But I abandoned it all and invested all my fortune in commercial farming because of the passion and conviction I have to make it work as a business.

Everyone thought I had lost it. Who takes their money and invests it in agriculture? They said I would lose all my fortune. They tried to dissuade me by showing me everything that could go wrong but I was resolute. Seven years later, I believe I have proved them wrong.

Tell me about when you were growing up. Who did you look up to? 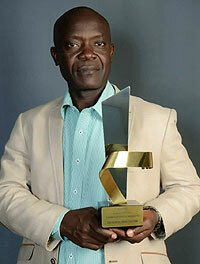 Up until the age of 15, I idolized a man called Saku, then a prominent commercial farmer in Kawuku, Mukono district, where I grew up with my aunt. This man was so wealthy even as a child, I never did explore the entire stretch of his estate.

From 15 years on, I became an ardent admirer of the late Dr. James Mulwana because he was an industrialist as well as an established commercial farmer; two things I always wanted to try out. I am glad I had a chance to interact with him. His advice is partly what helped get to where I am today.

What was your turning point in life?

With the help of the late (Dr. James) Mulwana, I went to Huntingdon, UK, in 2002, to train in industrial chemistry. I stayed on until 2006. While there, I also trained in farming. The exposure I got to commercial farming methods and experience in business during that time largely shaped the direction I took to where I am today.

What do you consider your biggest success to date?

Winning Vision Group's ‘Best Farmer' competition in 2014.   I won sh50m in farming equipment and a trip to the Netherlands. But nothing can equal the sheer magnitude of that honour. I got into farming because of passion and to make money not to win competitions. So I did not go looking for it. So, being chosen the best amongst my peers was a validation of my efforts to popularize farming as a viable business. I was truly honoured.

What did your parents tell you that has proved useful in your career today?

The aunt with whom I grew up with once told me never to mess with her hoe because that implement was responsible for putting food on her plate and paraffin in her wick lamp. The moral of her appeal simple; never take your livelihood for granted. That stayed with me and forms the basis of the commitment I have towards my trade today.

Tell me about when you failed as an MD

A few years ago, I made an impulsive decision to recruit an inexperienced purchasing officer for our enterprise because he was cheaper to hire. This was against the advice of my team. It turned out to be the biggest mistake of my working life.

In less than a year, our sales had plummeted to a little over 10% and we lost over sh30m. We could barely afford rent.  It took a lot to get us out of that ditch. I learnt that as CEO, you cannot afford to act impulsively and that no one has monopoly to ideas; listening to your team is a virtue.

How do you learn?

The moment I joined farming, I knew that I had to network with people who were prosperous in the sector. I know and I am in touch with fellow farmers from all over the country. They all have something they do differently; something I can always learn from them.

Secondly, I am an ardent reader of agricultural literature. That helps me to learn about developments and innovations in agriculture as well as how to deal with challenges.

When it's all over, how would you like the world to remember Patrick Iga?

I want to be remembered as a man who helped enforce a mindset change amongst out people that agriculture as a business is viable and trendy.