Did you know that 500 girls are infected with HIV every week? We have the shocking figures and explanations.

Did you know that 500 girls are infected with HIV every week? We have the shocking figures and explanations.

Good morning, what does today's edition of the leading daily, New Vision, hold in promise for you?

Here's a sneakpeek. By the way, you can read the online version of the New Vision and her sister papers. GO HERE for details.

The pay for soldiers will be increased soon. Find out the budget for the defence ministry in comparison to other ministries. Also find out how much the lowest soldier gets and how much he will get now.

We have more comparisons with salaries for other government workers like teachers. Get the details inside. Museveni has commissioned a sh129 billion bio-fuel plant at Kakira Sugar Works. Find out what the President has said about the impact of the sugar industry in Busoga and the country in general.

Did you know that 500 girls are infected with HIV every week? We have the shocking figures and explanations for this high number.
Find out the new strategies to reduce the HIV scourge.

The Senior One selection starts today. We bring you the cut-off points for the top schools. 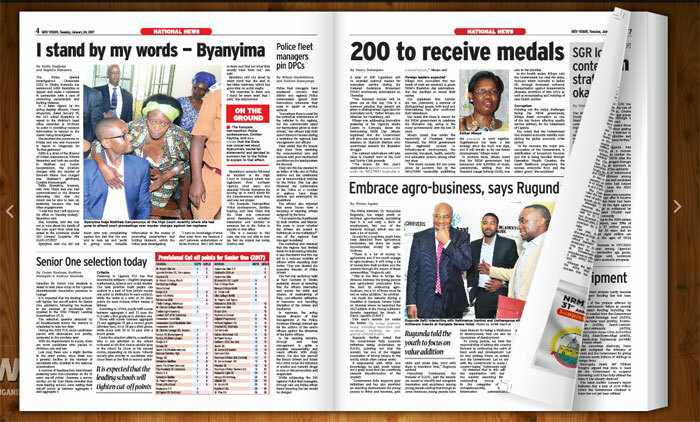 Uganda has assured its neighbours that its domestic birds are free from the deadly flu. We give you details on how Uganda has handled the bird flu outbreak.

The Police have summoned Edith Byanyima. The summons are related to Kanyamunyu's murder case. Get details inside.

The managers of Police vehicles have explained why most Police cars are DMCs. They have heaped the blame on district and regional Police commanders. Find the details in New Vision.

FDC has set the date for the election of its party president. Find out how many people have already picked nomination forms.

200 people will get national medals on the NRM Day on Thursday.
Find details about the event and which presidents are expected at the function.

Kyambogo has called for more applicants for the post of Vice-Chancellor. What happened to the first applicants? We have the full story.

The Government has explained the selective pay raise for the Chief Justice and permanent secretaries. We bring you the new salary figures that have caused ripples in the public service and what the government says.

MPs grill officials over the delay in the delivery of new construction equipment to the districts. Is the programme dead or not? Find out what has happened.

A traditional herbalist is on the run following reports that he concocts a mixture of herbs and ARVs to give HIV/AIDS patients.
We have the latest news on how this suspect has been fooling his patients and extorting money from them.

In Katikamu North, over 1,000 people are being evicted from land in Mbale village. The people thought they were on Kabaka's land, so who is the owner of this big piece of land?

Tobacco kills 7 million a year - WHO