Obua is jealous of Cranes' achievements - ...
Next Story

Morocco make a dramatic comeback against Togo in a four-goal thriller.

Morocco make a dramatic comeback against Togo in a four-goal thriller.

Herve Renard's Morocco came roaring back from behind to beat Togo 3-1 in Oyem on Friday and breathe life into their Africa Cup of Nations bid.

In front of a sparse crowd, Mathieu Dossevi had given Togo an early lead in northern Gabon, but goals from Aziz Bouhaddouz and Romain Saiss had the Atlas Lions in front before the midway point in the first half.

Substitute Youssef En-nesyri then smashed in a third goal in the second half as Morocco bounced from back their opening defeat to DR Congo to go second in Group C.

They are a point behind DR Congo and one ahead of the Ivory Coast, who they face in their final group game in Oyem next Tuesday. DR Congo and the Ivorians, the reigning champions, drew 2-2 earlier in the day.

Meanwhile, Emmanuel Adebayor's Togo prop up the section with just one point, and must win against DR Congo in Port-Gentil in their last match if they are to stay alive.

Renard, who led the Ivory Coast to glory at the Cup of Nations two years ago and also guided Zambia to the title in Gabon in 2012, was staring at the prospect of an ignominious early exit as Morocco fell behind inside five minutes. 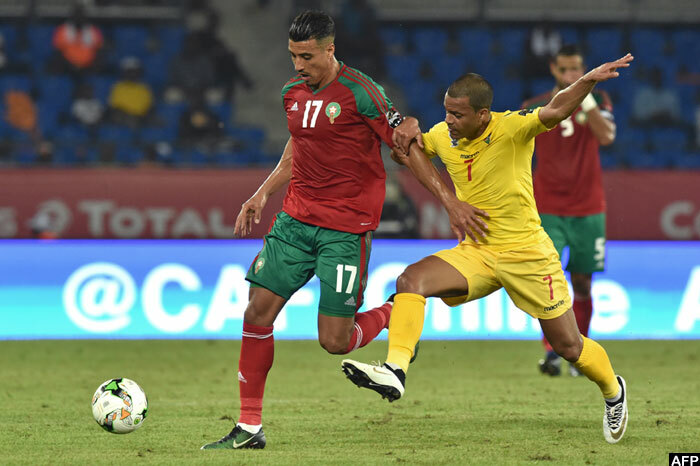 Togo broke downfield and Floyd Ayite slid in Dossevi, who guided a low shot across the goalkeeper and into the far corner.

However, Morocco's reply was swift as they drew level in the 14th minute, Togo 'keeper Kossi Agassa coming and missing a corner and St Pauli forward Bouhaddouz heading in at the back post.

It was from another set-piece that Morocco took the lead as Faycal Fajr whipped in a free-kick from wide on the left and midfielder Saiss, who plays his club football in England, headed home.

Captain Adebayor was Togo's most likely source of an equalising goal but he was denied a quick leveller by the goalkeeper and also headed a Dossevi cross over early in the second half.

With Claude Le Roy's side forced to push men forward as they chased the game, Morocco put the outcome beyond doubt in the 72nd minute.

Not long on from the bench, Malaga's En-nesyri tried his luck on his left foot from 25 yards and the ball bounced in front of Agassa on its way in as Morocco secured the most convincing win of the tournament so far.