Despite trailing in the first half, The Cranes fans kept willing their side on in Port Gentil.

Despite trailing in the first half, The Cranes fans kept willing their side on in Port Gentil.

Down but not out, goes the saying. On Tuesday, Uganda played their first game at the Nations Cup finals in 39 years. It started on a losing note though, against Ghana.

But credit to The Cranes fans, both in Uganda and beyond, whose unwavering support got their team going. More credit to the fans who were in the stands of the 20,000-seat Stade de Port-Gentil who kept the Ugandan flag flying high. 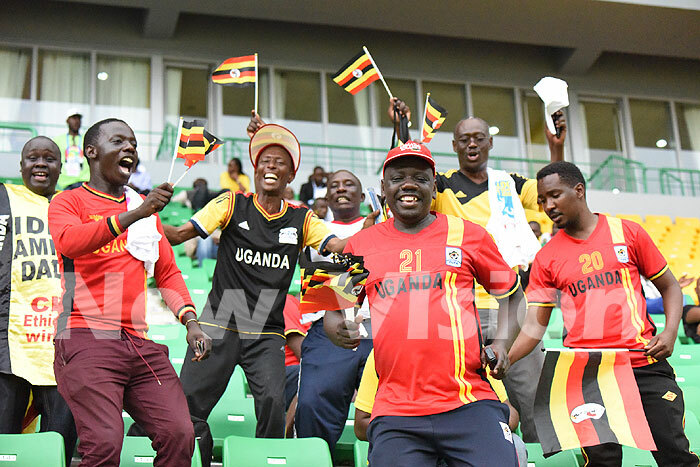 About an hour to kick-off, pockets of high-spirited Ugandan fans were already inside the stadium warming up their voices and feet. 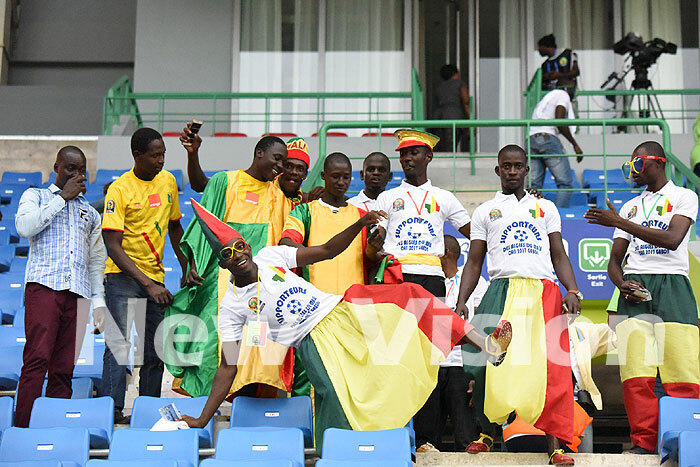 But since the battle on the pitch would be a two-team affair, the Ghana fans also made their presence known early, some keen on showing off their flexibility. 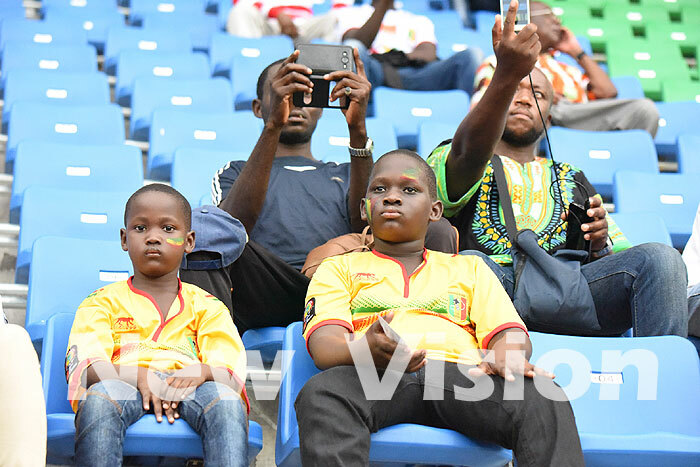 While some others across the stadium decided to use up that pre-match time to take a couple of selfies, others elected to sit it out . . . and wait for the actual action. No sweat! 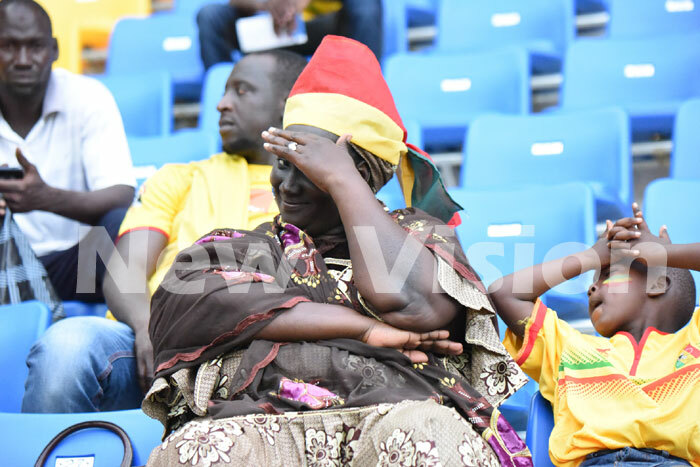 One other one particularly appeared a bit, uhm, camera-shy, should we say?

That blush though. Hmm :) 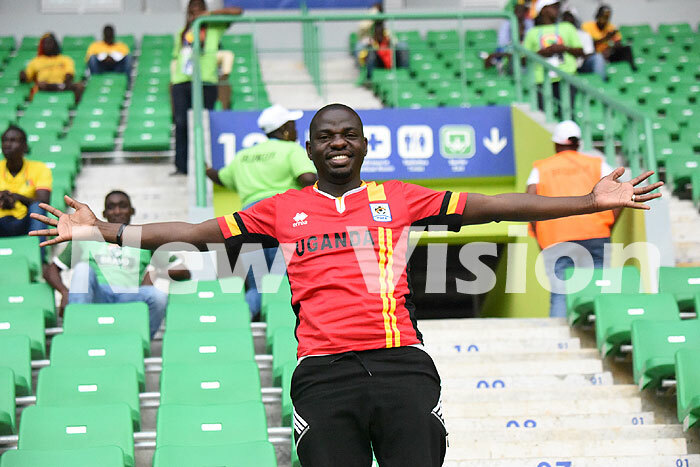 Meanwhile, 39 years of waiting for anything is quite a long time. And it's even longer if you've been coming ever so close to getting it or getting there. That's what Uganda's script has been like as regards Africa's biggest football tournament. The finals has been an elusive stage, until most recently. So now that we are back there, not many have had the chance to travel to Gabon, the host nation. Only a few, like Ugandan sports journalist Ismail Dhakaba Kigongo, seen here spreading his hands out like the Crane's wings, did manage . .  . 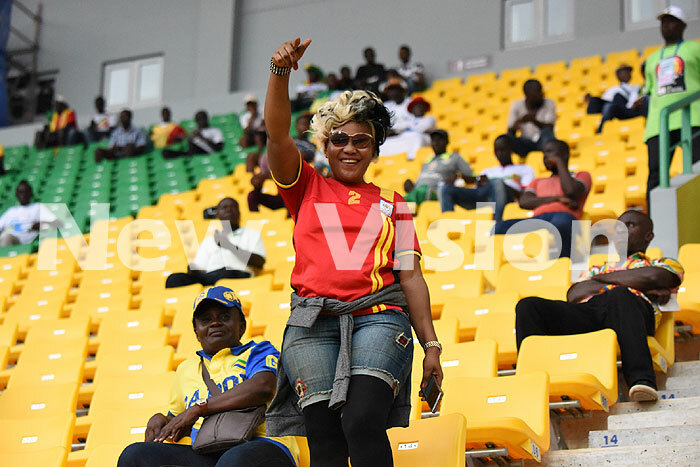 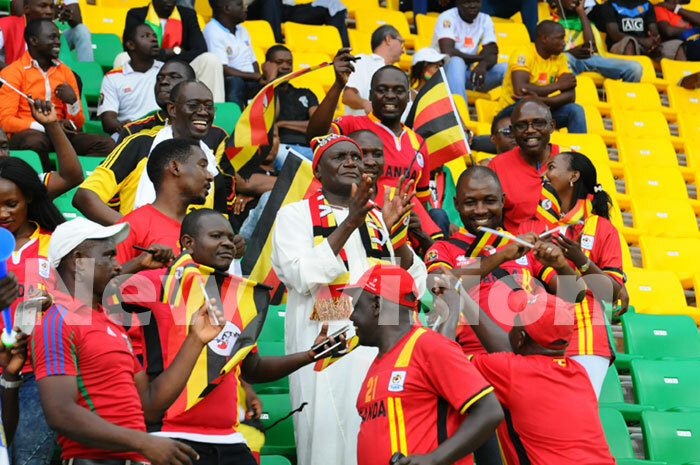 Part of The Cranes support in Port Gentil was Makindye West MP Allan Ssewanyana, also well known as Omusajja Wabwiino -- he has been a presenter of sports, particularly football, on both local TV and radio. 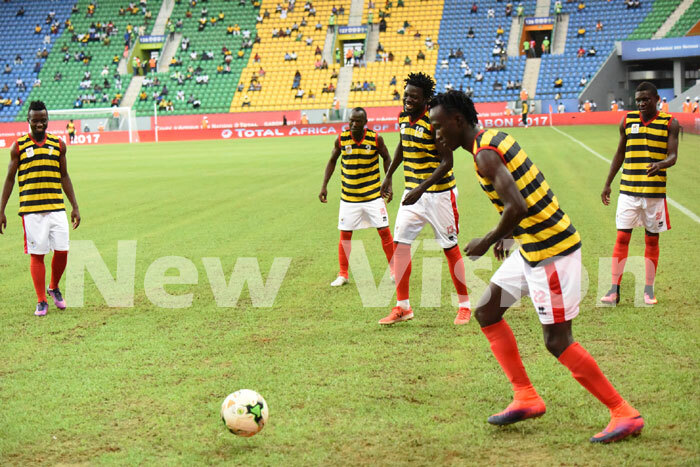 As the sparse crowd in the stadium warmed up to the game, the players did their warming-up too on the pitch. The Cranes team wore sleeveless tops during their warm-up session. 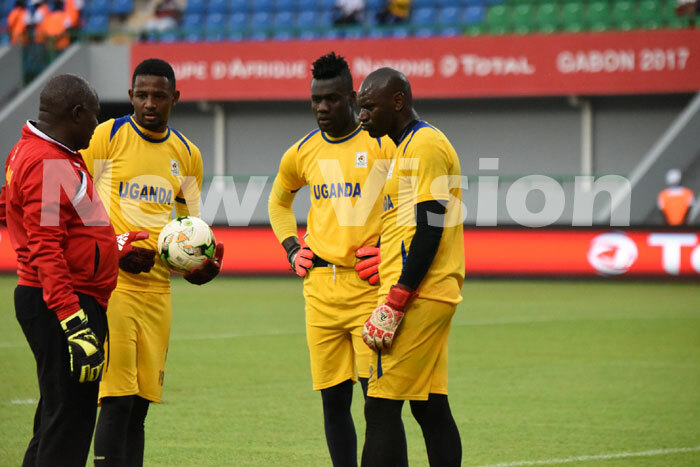 The three Ugandan goalkeepers -- (from right) Denis Onyango, Robert Odongkara and Salim Jamal -- wore an all-yellow outfit as they were taken through warm-up by the goalkeeping coach. 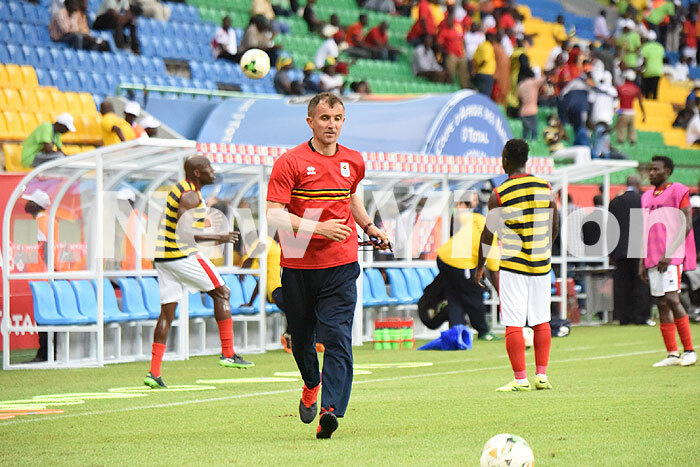 Cranes coach Milutin Sredojević, whom we know very well as  Micho, was a nine-year-old boy perhaps running up and about playing with friends at the time Uganda was playing Ghana in the final of the Nations Cup in 1978. Fast-forward to today and here was the Serb on Tuesday minutes before kickoff taking another generation of The Cranes through a warm-up session ahead of yet another battle with The Black Stars. Earlier, at a pre-match press conference, the 47-year-old tactician had said Uganda's return to the Nations Cup was destiny. 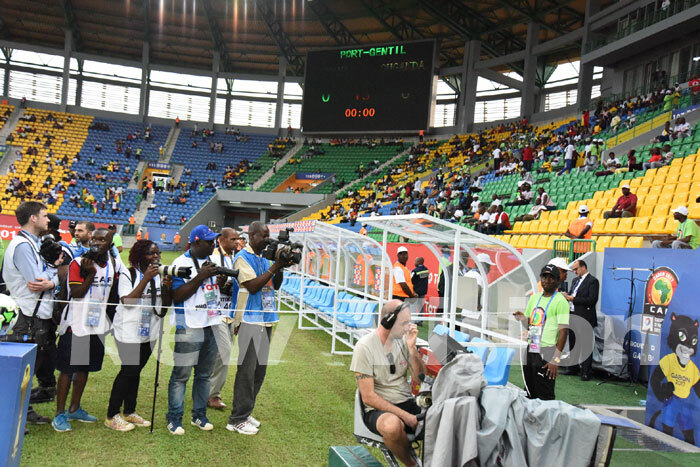 Such big tournaments attract the interest of not only fans (and scouts too), but also the press. And at the Stade de Port-Gentil, people of the media waited for the teams to emerge out of the tunnel . . . 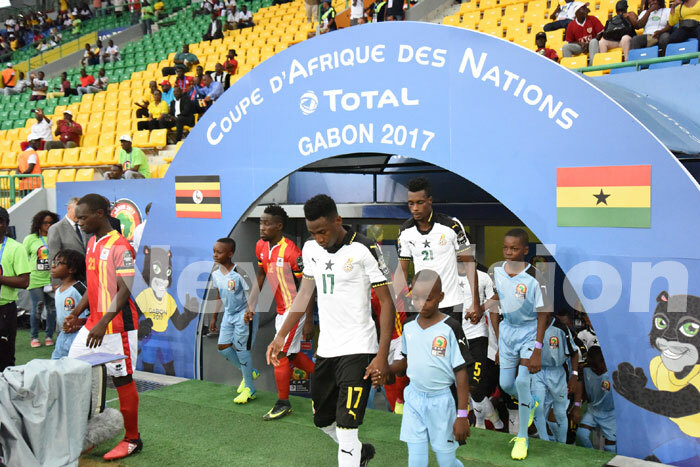 And it was all camera click sounds as the players walked out of the dugout, with The Cranes going for the red top-white short outfit while The Black Stars appearing in a white-top-black short jersey. A showdown that evoked three decades-long memories was nigh. 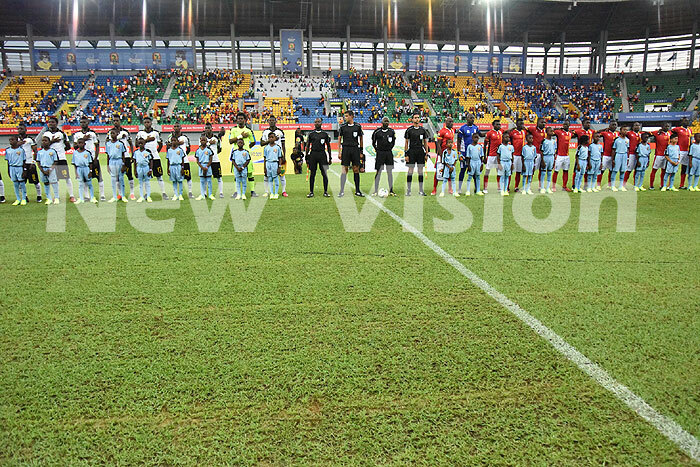 The fans, players, match officials, team camps and guests were all on their feet to sing the respective national anthems.

and then 'Oh Uganda, Land of Beauty'

An explosion of the feeling of patriotism always hits me during this time, I must say. 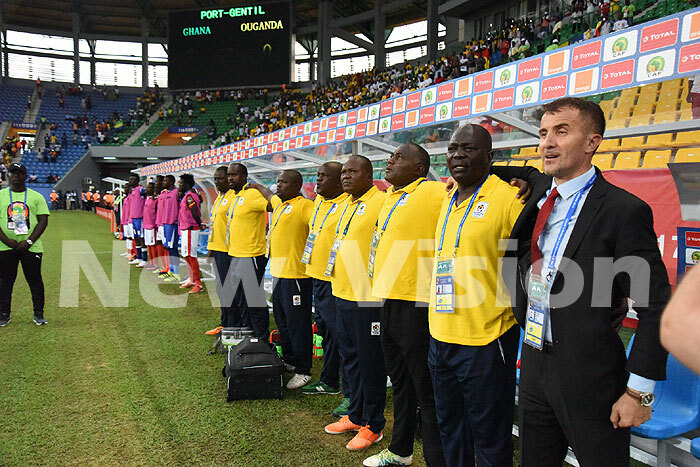 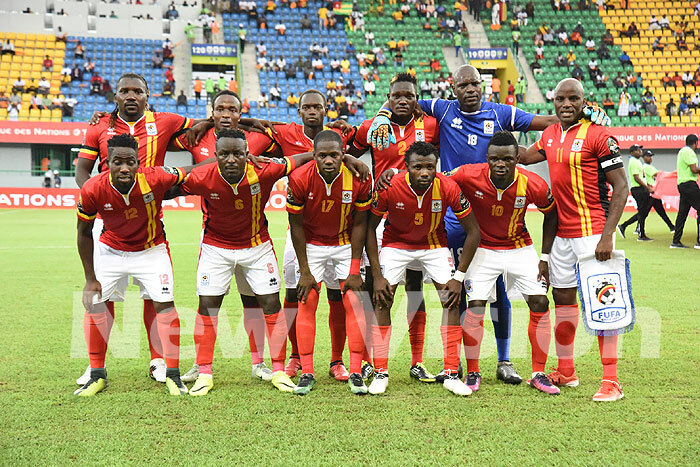 And then the action began! 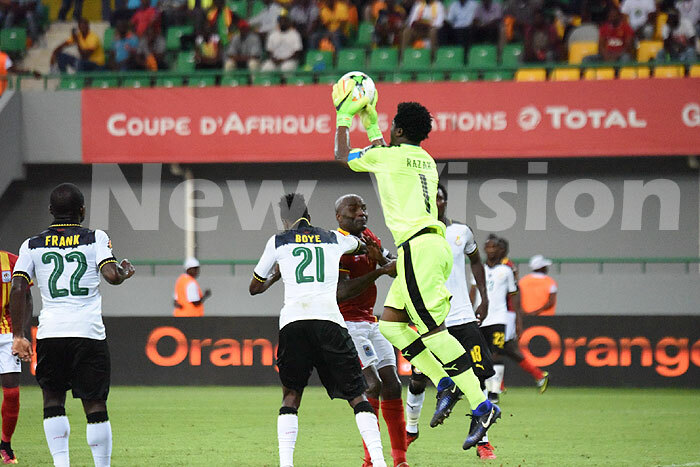 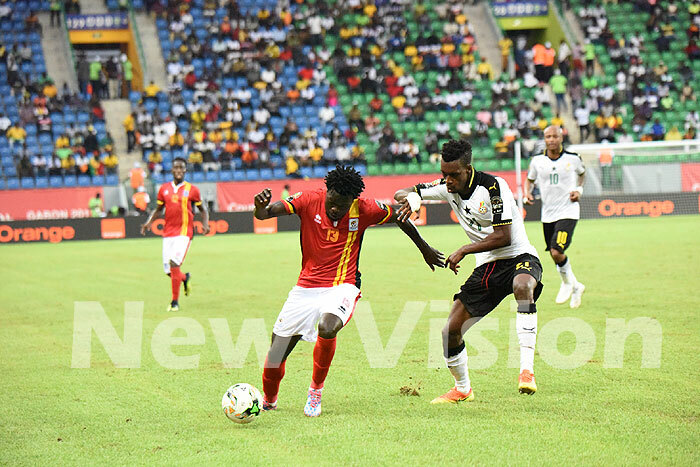 GO HERE for the rest of the action in detail