Children with disabilities left out of uni...
Next Story

Is it a jungle life for children with disability?

"I did not know how to use braille when I joined Madera, but now I have learnt, except that we do not have enough braille machines to use."

Blind students using Perkins Braillers to study. However, this technology is quite expensive and most schools cannot afford it. (Credit: Godfrey Ojore)

"I did not know how to use braille when I joined Madera, but now I have learnt, except that we do not have enough braille machines to use." 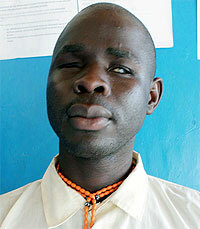 I was a student in Okille primary school. When I got promoted to P5, I was transferred to Madera. Here, Teachers were not happy with my performance. They took me back to P1. That made me unhappy. I did not know how to use braille when I joined Madera, but now I have learnt, except that we do not have enough braille machines to use. We share the machines. Sometimes you have to wait for a long time for your turn. This delays us. I like to study but my guardian sends me to school without pocket money and scholastic materials. He never comes to visit me the whole term and sometimes never collects me from school. This hurts. Sometimes the head teacher helps with some soap and sugar. I wish my parents were alive. 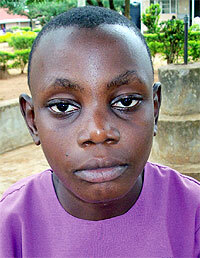 I like studying even though sometimes we have to study without interpreters. Sometimes, my hearing classmates help. The only problem is that they are very quick when trying to interpret what the teacher will have said in class that I sometimes fail to understand. I also find it difficult to follow some teachers' sign language interpretations. I think some of them use different signs from the ones that we know. This makes studying difficult. My parents passed on. I am being looked after by my auntie and uncle. I wish they could visit me at school. I enjoy dancing so much and I am happy to represent my school at dancing competitions. I want to do operate a salon when I leave school. 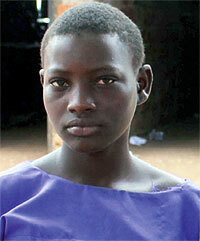 I used to live with my parents, until my father asked my mother to take me away from home. My mother brought me to live with her sister. I walk five kilometres to school every day. Before leaving home I have to sweep the compound, cook and clean the house. I come late to school. This affects my performance. I sometimes don't understand what teachers say because some of them do not know sign language. It is sometimes lonely here. 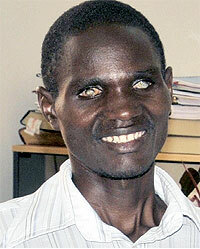 Rashid Ssozi: one man's journey to an education

I was five years old when I got struck with measles during the 1980 liberation war in Luweero. We were on the run so my parents could not find proper treatment. The disease left me completely blind. My father Yunus Batte died during that period and left my poor mother to look after me and my siblings. When the family moved from war torn Luweero to Masuulita in Wakiso district, my mother sent me to Kanzize Church of Uganda Primary School.

At school, I was the only blind child. I struggled to cope. Without specialized tools to use, I had to listen carefully to the teacher and rely on my memory to learn. Teachers usually never came back to explain concepts.  I only did oral exams. I felt bad that I could not play with my friends; this affected my performance. My fortunes changed when a gentleman called Fred Kasozi found me along the village path. After consulting my mum, Kasozi (who worked for Save the Children) took me to a government sponsored center for visually-impaired children in Iganga and enrolled me in a nearby Bishop Willis demonstration school. After two years, Government sponsorship to the school stopped. I dropped out. I spent four years out of school until I met another kind gentleman called Washington Mugerwa. I met him through Rose Munialo, an Inspector of schools then.

Mugerwa gave me a place at his school, Rev. John Foundation School and offered me a bursary. He also offered tools to help me in my studies. I was 16 when I joined P5 there. Teachers paid attention to me and with the help of my braille tools and tape recorder, life became a easier.

My confidence improved. I served in various capacities as sanitation and student welfare prefect respectively and later as advisor to the prefects' board. I passed with aggregate 16 and continued to Crane High school where, with the support of Peter Birungi, the director, I progressed.  I became a student council leader and worked very hard to advocate students' cause. At A level, I studied literature. I often asked my friends to read the novels out loud for me as I wrote notes. I emerged the best Literature student in my school and won a government scholarship to study Mass Communication at Makerere University.

Betty Mugenyi is the grandmother of 12-year-old Mike Ssebalu with a hearing impairment and a P.2 pupil at Bishop West Primary School in Mukono district

Ssebalu was only two years old when his father died. He and his siblings were entrusted to my care. I tried to enrol Ssebalu in a special school in Ntinda in Kampala. I used to walk him to Ntinda every Wednesday for induction lessons until I gave up. It was too much work and I could not afford it. I had decided to take him out of school until a Good Samaritan offered to support him in an inclusive school. That is why I brought him to Mukono. Since he joined here, he has improved.

Margaret Namawejje, mother to an 11-year-old P3 pupil with a hearing impairment

My son suffered from malaria at five years. He got an injection that affected his sense of hearing. I had decided to not send him to school because I did not see the point. However, some people advised me to try. It is difficult to put up with him because of his inability to communicate with the rest of the family. He is also short-tempered. Keeping him in school is difficult because I cannot afford the sh270,000 required by his teachers. I do not see much hope for him in school.

Next: Read about Special needs education in other countries and the way forward

(This article was first published on Tuesday, November 12, 2014)