According to Koire, more than 50% of the women who attend antenatal services in Butaleja Health Centre III are girls aged between 13 to 16 years.

According to Koire, more than 50% of the women who attend antenatal services in Butaleja Health Centre III are girls aged between 13 to 16 years.

Evelyn Mukeera behind her ramshackle mud and wattle hut. Photos by Owen Wagabaza

At 17 years, Evelyn Mukeera is already a mother of two and her third born is on the way. She was married off at 13 years by her father after failing to progress to Primary.5 in a number of attempts. "My mother had got a brain disorder and I was the one nursing her and taking care of the home, and with all these responsibilities, I could not concentrate in class," Mukeera says.

Unknown to Mukeera, her father and his neighbours were working behind doors to have their children marry each other. "Their first born had been struck by lightning and he died without a child. To avoid a similar scenario, they approached my father and requested him to marry me to their second born child who was 21 at the time," Mukeera says.

The two parties agreed a fee of sh400,000 for Mukeera's hand in marriage. The father was paid a deposit of sh300,000 and upto now, the balance of sh100,000 has never been paid. Mukeera says her father spent all the money on Waragi. "I would want to go back to school, but I'm worried my husband may not allow me," Mukeera says.

For Monica Namugambe, her father chased her away after she got pregnant while in Senior.2. Namugambe says, her father Emmanuel Mbulate was not contributing in anyway to her education and this forced her into sexual relations with a boda boda rider who had promised to pay her fees as well as take care of her basic needs.

When she got pregnant, her father forced her into marriage with the bodaboda rider, despite his wife's protests that the girl was still young for marriage.  Mbulate was paid sh300,000 as bride price out of the agreed sh500,000.

A revered drunkard, the man spent all the money on Waragi. "I think it was a blessing in disguise for him, because he had on many occasions prayed for the day I get married so that he gets his bride price when he is still alive," Namugambe says.

Jimbo Jalia went with her sisters for an outing on Christmas day at Nabigando Town Council, because people were many, she lost contact with her sisters, on her way back home, she was waylaid by a gang of men who kidnapped her and took her to unidentified place.

The ringleader who in fact was her neighbour defiled her all week long, and when she was finally released, Jimbo had conceived. Though Jimbo's parents had reported the case to police, they later withdrew it and rather opted to solve the case amicably. In the end, Jimbo was married off after the defiler paid sh700,000 to Jimbo's parents.  "My father spent all the money in a bar," she says, with eyes filled with tears.

Mukeera, Namugambe and Jimbo are some of the hundreds of girls who have been married off at every tender age to their defilers by their parents.

A report titled the situational analysis of child poverty and deprivation in Uganda 2014, by UNICEF ranks Butaleja as the district with the highest concentration of child marriages in the country at 59%, a little higher than the national average of 57%.

"Each pregnancy poses great risks to a girl. It endangers her health. It takes psychological toll on her. Very often it forces her to leave school," she said.

Nationally, according to the 2011 Uganda Demographic and Health Survey, one in four girls aged 15 to 19 is pregnant or has had a child. "Statistics further show that 50% of married women and those in union get married before their 18th birthday.

"Child marriage is a violation of the rights of girls and women. Girls who are married as children are more likely to be out of school, suffer domestic violence, contract HIV/AIDS and die due to complications during pregnancy and child birth," the report says.

Steven Langa, the Director of Family Life Network says child marriage robs a girl of her childhood, and imposes adult roles and responsibilities on her before she is physically, psychologically and emotionally prepared.

"It isolates girls from their friends and families and disempowers them to refuse sex or negotiate condom /family planning use, making them vulnerable to teenage pregnancy, HIV and other sexually transmitted infections. Child marriage also denies girls the opportunity to get an education and fully develop their potential, keeping them and their future families in poverty," Langa says. 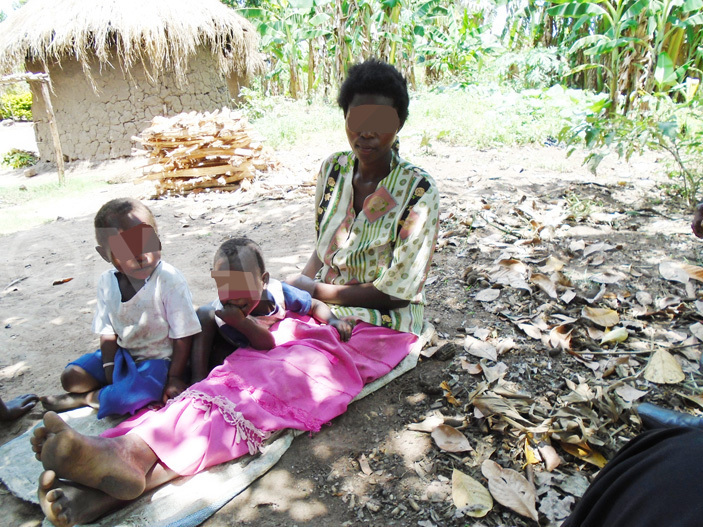 Monica Namugambe with her two children

Maurice Okura, a counseling psychologist at Makerere University says that girls that have been married off at a tender age have no say in these marriages yet a woman in a home is charged with the responsibility of ensuring the well-being of all family members including her husband.

This subjects the child to take up responsibilities greater than what they can handle or comprehend thus many mistakes are done in the process which calls for disciplinary actions from the husbands. In other words, child marriages nurture domestic violence.

Dr. Donald Isabirye of Mulago Hospital says early marriage is the main contributing factor to teenage pregnancy and a girl between the age of 15 and 19 is twice as likely to die during pregnancy or childbirth than a woman in her 20's.

Waya further attributes early child marriages to the biting poverty in the district and as such, the district leadership is looking at ways of improving the economic standings of the locals.

The district leadership is also promoting girl child education and is coming out strongly on offenders. 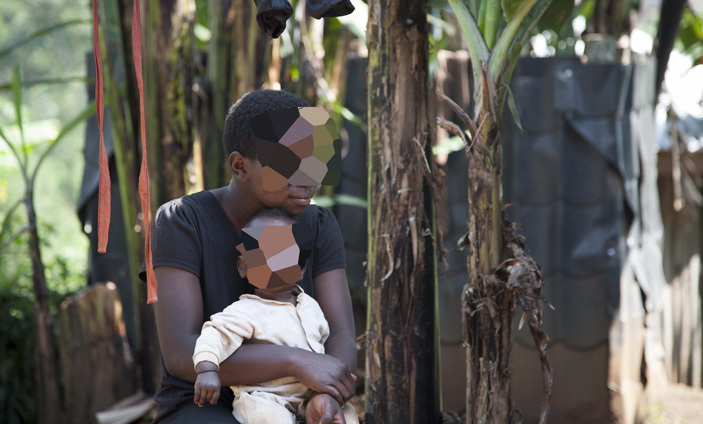 A young mother with her child

Robert Mudiba, the Eastern Region communications officer for Joy for Children, an organization that is working to end child marriages in Butaleja says they are engaging communities to have a mindset shift and stop making girls home makers but change makers by ending child marriages and consequently teenage pregnancies.

"We are having massive sensitization drives all over the district; we are organizing talks in schools, churches, communities and even at burials. Whenever we get an opportunity, we utilize it. We have also been able to convince a number of girls who had been forced into marriage to go back to school," Mudiba says.

Child marriage at a glance in Uganda

The situational analysis of child poverty and deprivation in Uganda 2014, puts the national average of child marriages at 57%.