Obama grew up in Hawaii and he has brought the First Family to the islands every year for Christmas vacation.

President Obama retrieves his ball after putting on the 18th green at the Kapolei Golf Club in Kapolei during his annual Christmas vacation in Hawaii. (AFP)

Obama grew up in Hawaii and he has brought the First Family to the islands every year for Christmas vacation.

Hawaii was never Barack Obama's political stomping grounds -- that was Chicago. But his childhood in the Aloha State helped fashion his worldview, and instilled in him the need to sometimes look at unfolding events, and himself, with a bit of distance.

The only American president born in the Pacific island paradise -- nearly 5,000 miles (8,000 kilometers) from the nation's capital -- Obama is proud of his roots.

"I feel like it fortified me," he said recently, when asked about his legendary calm demeanor. "There's a certain element of chill. You got a little Hawaii in the mind."

As the 44th president prepares to say farewell to the White House next month, residents of the nation's 50th state are convinced that the soon-to-be ex-POTUS will spend more time here.

Obama grew up in Hawaii, aside from four years in Indonesia, and he has brought the First Family to the islands every year for Christmas vacation.

Now, locals hope he will play more golf with his high school friends, eat more often with his family at Zippy's -- a local chain restaurant -- and share more shave ice desserts here with his teenage daughters Malia and Sasha.

Multicultural Hawaii has voted primarily for Democrats for decades (the state senate currently has no Republican representatives).

The pride locals feel about their presidential native son is real, if somewhat discreet.

"Hawaiians love Obama," says J. Kalani English, a Democratic state senator. "He is one of us -- he understands what aloha is, he understand what mana is."

Aloha is a traditional Hawaiian greeting, but also means "compassion" and "peace." Mana is a form of spiritual energy and healing power.

"We have this attitude of live and let live. We give people space. It's just the Hawaiian way."

In the state capital Honolulu -- where Obama's parents met at university and he lived with his grandparents Stanley and Madelyn Durham as a small boy -- there are no streets, schools or squares named after the president.

And when tourists visit Pearl Harbor to honor those killed in the 1941 Japanese surprise attack, tour guides quickly mention the Kapiolani hospital, where Barack Hussein Obama was born on August 4, 1961. 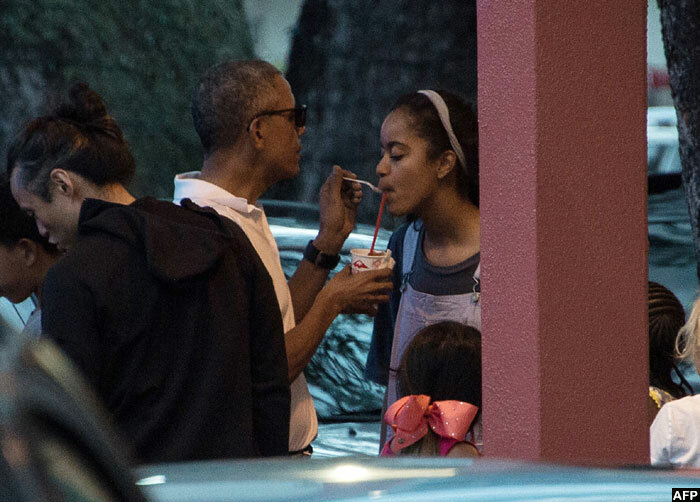 Obama gave his daughter Malia a taste of his shave ice at the Island Snow parlor in Kailua, Hawaii last Saturday

Away from the beachfront bustle in Honolulu's Waikiki neighborhood, the Baskin-Robbins ice cream shop on South King Street, where Obama worked his first job, is still there.

Only a newspaper clipping haphazardly scotch-taped near the cash register recalls the 1970s tenure of a teenager who would become leader of the world's largest economy and a Nobel peace laureate.

From time to time, customers ask if the article is true, says 19-year-old employee Karly.

So will Obama hang out in Hawaii more once his presidency ends?

"It would good if he had a house here because he is from here... but on the other hand, there is traffic," said Karly, raising locals' main gripe -- the epic traffic jams caused by the presidential motorcade and his security detail.

'You jump in the ocean'

In 2014, Stanley Chang, then a Honolulu city councilman, proposed that Sandy Beach, on the south shore of Oahu, be renamed in honor of the Democratic president who spent long hours there in his youth.

But the bid failed for several reasons, including the concern that the name would attract too many inexperienced surfers to a beach known to be one of Hawaii's most dangerous.

"It might have been a little early," the 34-year-old Chang, now a state senator, told AFP. "In the coming years, there will be a lot of things that will be named after him here in Hawaii."

The Obamas -- who own a home in the Hyde Park neighborhood on Chicago's South Side -- have rented a vacation home near the water in Kailua, on Oahu's northeast coast, for the past eight years.

Rumors regularly make the rounds suggesting the family is looking to buy in Hawaii. Speculation has focused on a huge waterfront property where the popular 1980s television series "Magnum, P.I." was filmed.

Nothing has been confirmed, however. The only thing clear is Obama's attachment to his home state.

Vanity Fair magazine asked him in 2012 what he would do if he had a day to himself, with no onlookers, and could do as he wished.

Catch a wave, he answered.

"You park your car. If the waves are good you sit and watch and ponder it for a while. You grab your car keys in the towel. And you jump in the ocean," he said.

"And you spend an hour out there. And if you've had a good day, you've caught six or seven good waves and six or seven not so good waves. And you go back to your car. With a soda or a can of juice. And you sit. And you can watch the sun go down..."

Sports View: Great ambience but the food could use more work

Is there nobody in charge of Workers House?