The plant in the industrial town of Thika is expected to produce cars for Kenya as well as the wider East African market.

The plant in the industrial town of Thika is expected to produce cars for Kenya as well as the wider East African market.

Volkswagen on Wednesday opened a new assembly plant in Kenya and launched plans for a ride-sharing service in Rwanda as it seeks to take advantage of surging car demand in Africa.

The German car manufacturer's move into East Africa comes just weeks after it signed a deal to build an assembly plant in Algeria.

"Overall car sales in Africa are bound to rise by 40 percent within the next five years, that is why we are expanding our business," said Volkswagen Brand CEO Herbert Diess.

"It is fair to say that the whole continent has seen a long period of economic stagnation, but just like China in the early 80s Africa offers great business opportunities. That holds especially true for Kenya."

The inauguration of the assembly plant in Kenya marks its return to the regional hub after an absence of some four decades.

The plant in the industrial town of Thika is expected to produce cars for Kenya as well as the wider East African market, starting with the Polo Vivo, described as the company's most successful passenger car model in Sub-Saharan Africa.

Kenyan President Uhuru Kenyatta said the investment by Volkswagen was in line with government policy to industrialise his country's economy.

"With the opening of this facility, I expect to see a lot of VW government vehicles. I hope the county governments will also buy Volkswagen cars," Kenyatta said. 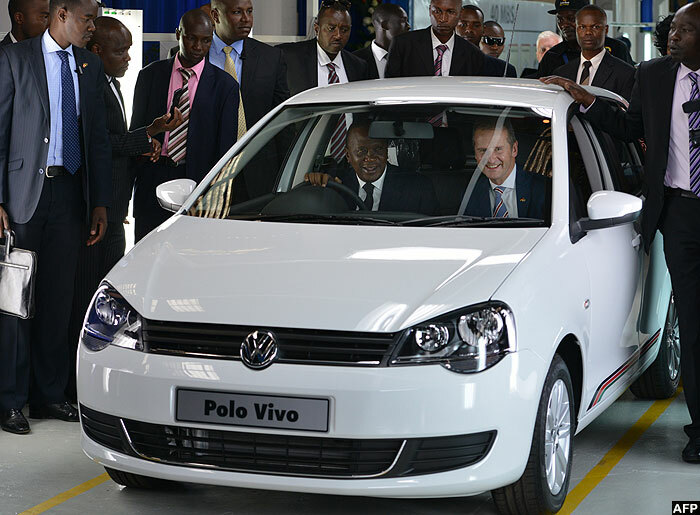 According to a January report by Deloitte Africa Automotive Insights, a rise in incomes in Kenya is driving the sales of motor vehicles -- accounting for 1.5 percent of consumer expenditure in 2015.

Passenger vehicles were Kenya's fourth-largest import in 2014, and the volume of imported cars grew 300 percent between 2003 and 2012. Many of the imports are second-hand cars from Japan or the United Arab Emirates.

"If the current trend of 10 percent to 12 percent growth per annum on vehicle imports is to be maintained, Kenya will have five million vehicles on the road by the year 2030," reads the report.

Kenya currently only does small scale assembly of motor vehicles at three plants, all of which are operating below capacity, according to Deloitte.

Meanwhile another top Volkswagen executive was in Rwanda to launch a project involving "app-based mobility solutions".

"What we have in Africa is a lot of need for mobility but in certain regions maybe not the affordability to go in a full ownership of a vehicle," said Thomas Schaefer, CEO of Volkswagen Group South Africa.

The company had looked at ways to solve this problem and came up with a pilot project that will involve a company owning vehicles and allowing customers to pick them up in one point and drop them off in another -- like similar systems in Berlin, London and Paris.

"We will make passenger vehicles not only available for the market to buy but also for the shared service that now is increasingly becoming the trend in many cities of the world," said Francis Gatare, CEO of the Rwanda Development Board.

Part of the project also involves the construction of an assembly plant in Kigali.

Tiny Rwanda has no established vehicle industry, but it does have a population with an average of less than 20 years old and a commitment to clean energy.

Volkswagen said it was also considering introducing electric cars into the country.

"Rwanda is well-suited to be a pioneer of new mobility solutions as it has a population of young tech-savvy people and its capital Kigali is seen as the most connected city in Africa," said Schaefer.

An investigation phase will last until May next year and the company aims to have the first cars assembled in Rwanda by the end of 2017.

As in Kenya, the amount of the investment and production capacity have not been revealed.

Deloitte sees Africa as the "final frontier" for the global automotive industry, with its enormous growth potential.