Conflict in Africa blocking efforts to save giraffes

Somalia, DR Congo, South Sudan and north-eastern Kenya are all home to giraffe species that are severely under threat.

Somalia, DR Congo, South Sudan and north-eastern Kenya are all home to giraffe species that are severely under threat.

Selma saunters on her stilt-like legs, batting thick lashes as she extends a blackish tongue -- as long as an arm -- to grab pellets offered by an awed tourist.

The giraffe is after all, eating for two.

Her pregnancy is good news for one of the rarest giraffe species, protected at the Giraffe Centre in the Kenyan capital, but experts warn the outlook for the rest of the world's tallest land mammals is far gloomier.

While it is hoped the shocking news that the gentle giants of the African savannah are facing extinction will spur action, conservationists largely have their hands tied as many giraffe live in Africa's most conflict-torn regions.

Somalia, the Democratic Republic of Congo, South Sudan and north-eastern Kenya are all home to giraffe species that are severely under threat and conflicts not only lead to more poaching, but make it near impossible to study them or protect them.

"When (rebels) see a giraffe walking around they see it as a source of food. With one bullet you can take down such a big animal and that can feed them for weeks," said Arthur Muneza, East Africa Coordinator for the Giraffe Conservation Foundation.

"This also limits the research we can do so if researchers don't feel comfortable to go into such areas they won't document what is going on with them and it adds to the knowledge gap." 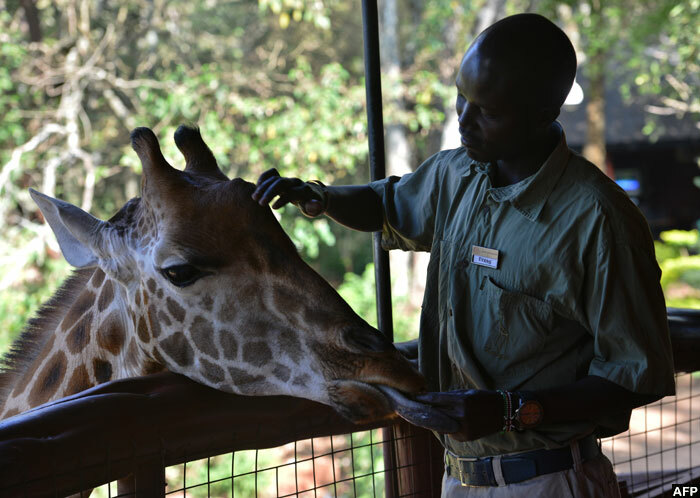 Selma, a female Rothschild sub-species of giraffe, interacts with one of their keepers

Historically, there has been little interest in studying the odd, but graceful creature. Easy to spot with its long neck, the giraffe has been taken for granted as a fixture of African wildlife.

"Long term research into giraffes only started in 2003 in Namibia. (For) elephants you have studies that have been going on for 30, 40 years," said Muneza.

The research revealed that giraffes have silently being going extinct, with numbers plummeting by 40 percent in the last three decades to about 97,500, the International Union for the Conservation of Nature (IUCN) reported this month.

East Africa is home to three of the four giraffe species, one of which is the northern giraffe which has three sub-species.

One of the sub-species is the Nubian giraffe whose populations in Ethiopia and South Sudan are estimated to have dropped from over 20,000 to just 650. However with conflict in the region it is difficult to get proper data.

The region has also lost 80 percent of its reticulated giraffe, which are spread over troubled north-east Kenya, Ethiopia and Somalia.

"Somalia is an important habitat for reticulated giraffe, there are reports they are still there but we cannot ascertain for sure so it leaves a bleak future," said Muneza.

"We are going to lose these animals if these countries do not know peace and if they do not become stable to allow conservation efforts." 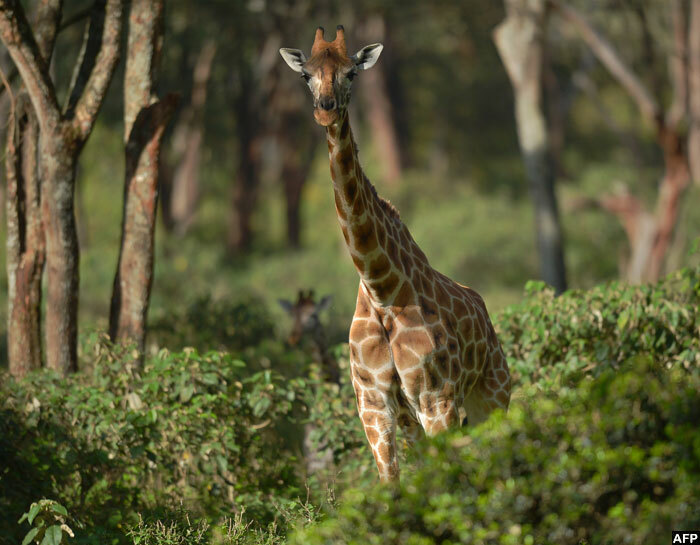 However conflict is far from being the only problem.

Habitat loss and fragmentation are also major contributors to their decline, restricting access to food and genetic flow.

In some parts of Kenya giraffes are killed for their bones, bone marrow and brains, which Muneza says are believed to be a cure for HIV/AIDS.

"Also there are people who kill only for giraffe tails. Such a lovely big animal is killed only for the tail used for cultural prestige so to speak."

Muneza said the first country in Africa to develop a national giraffe conservation strategy was Niger, which in the early 1990s realised it had the last 50 giraffe in west Africa.

Giraffes have become extinct in Senegal, Nigeria, Burkina Faso, Guinea, Mali and Mauritania and Niger has now got the population back up to 450.

Kenya is busy preparing a similar strategy and Uganda has shown interest.

"We are slowly gaining traction, a lot more work needs to be done. If we don't do it it will be too late, we have already lost giraffes in seven African countries," including Eritrea, he said.

Kenya has cracked down on illegal hunting and worked to raise awareness in communities and preserve giraffe habitats.

In Uganda and Kenya, the fragile Nubian subspecies is seen as stable, with some like Selma at the Nairobi Giraffe Centre breeding while entertaining tourists and educating Kenyan school groups who are allowed in for free.

"We are targeting young children because they are tomorrow's generation. We would like them to grow up with knowledge of conservation so when they take over the resources they can be able to live sustainably," said education officer Judith Sembe.