UN says three staff abducted in Sudan have...
Next Story

Relatives grieve by the corpse of victim of a blast in a  fireworks market, flattened by a huge blast that killed at least 26 and injured dozens, who lies on the ground in Mexico City, on December 20, 2016.  AFP PHOTO / ISRAEL GUTIÉRREZ R.

The market had been packed with customers buying pyrotechnics for traditional end-of-year festivities. Christmas and New Year's parties in many Latin American countries often wrap up with clattering firework blasts.

"You just heard the blast. And everything started to be on fire. In fact, people came running out on fire," said Walter Garduno, who witnessed the tragedy.

"People were running out on fire, alight ... children," said Garduno, before trailing off.

From a few kilometers (miles) away, the multiple explosions that started at 2:50 pm (2050 GMT) almost looked festive, alight in blue, red and white. They were anything but.

"We recovered 26 bodies at the scene of the incident. And three more have died in the hospital, for a total of 29 dead," Mexico state's governor Eruviel Avila said.

Federal police said on Twitter that 70 people were hurt and were transported to emergency rooms.

Fire crews struggled for three hours before bringing the blaze under control.

The head of the civil protection service, Luis Felipe Puente, said crews had to wait for all the fireworks to finish exploding before they could extinguish the flames.

He added that several of the injured were in "delicate condition," and searches were under way for more casualties in the scorched area that looked like a scene from a post-apocalyptic film, with little left standing in the smoldering ruins.

Homes and vehicles nearby were also severely damaged. In some areas, authorities were gently probing for survivors under heaps of charred and twisted roofing material.

People desperately searching for family and friends shouted and gestured to rescuers about where they hoped their missing loved one might be found. 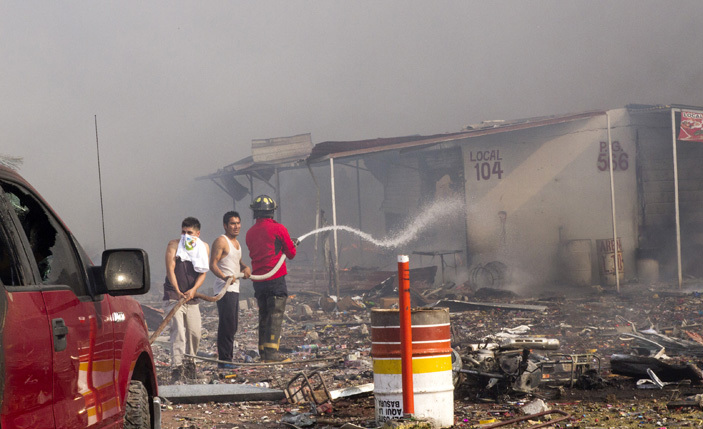 Fire-fighters work amid the smouldering ruins left by a blast in a fireworks market killing at least 26 and injuring dozens, in Mexico City, on December 20, 2016. AFP PHOTO / ISRAEL GUTIERREZ

Most of those being picked up by rescuers had severe burns, many over their entire bodies.

The military, which is in charge of issuing fireworks sales permits, was deployed to help emergency crews transport casualties to hospitals by ambulance and helicopter.

Mexico's President Enrique Pena Nieto tweeted his condolences to the families of those killed and his wishes for recovery for those hurt.

The cause of the blast was under investigation. Some speculated it could have been mishandling of gunpowder or other fireworks components.

That was the cause of a September 15, 2005 explosion at another fireworks market set up ahead of the Independence Day holiday. That market was destroyed.

The following year, another explosion destroyed more than 200 sellers' stands. Both incidents left dozens of injured, but no fatalities.

Alejandra Pretel, a resident in Tultepec, told AFP that she didn't realize at first that the explosions were coming from the large fireworks market.

"We thought it was a nearby fireworks workshop," she told AFP.

But minutes later it became evident that it was the market being destroyed.

"My neighbors said they felt everything shake, but I didn't realize because I was running away," she said.