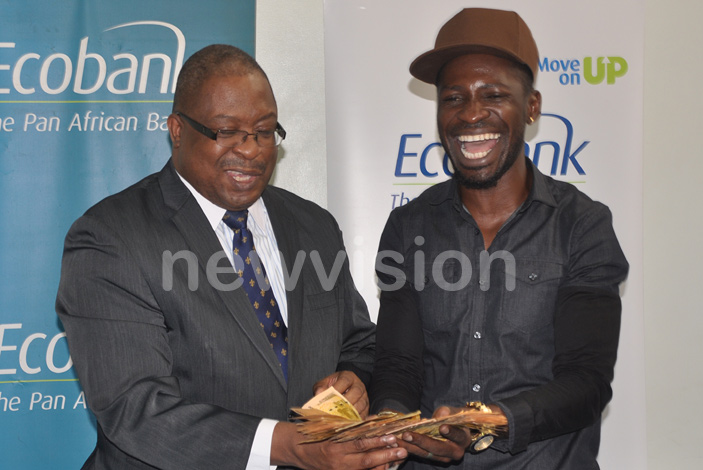 The ‘ghetto president' also called on other Ugandans to continue supporting the Cranes as they head to Gabon to compete in the Africa Cup of Nations after 38 years.

"Sports and Arts are some of the things that sell our country, and where talent is concerned I'm very involved that is why I have come in. But this is special because we last qualified for AFCON 38 years ago and I have never had an opportunity to support my country and the Cranes, so since we qualified I was compelled to come and support in a humble way. And I would encourage other Ugandans to embrace the campaign because it is the Cranes that binds us together despite our several differences," Bobi said before handing over the cash to ECO Bank Managing Director Clement Dodoo.

"His contribution is so significant for us and his gesture shows us that people are willing to support the Cranes especially when they realise that we are doing the right thing. On behalf of ECO Bank we would like to thank Bobi Wine and assure him that all the monies will be accounted for and we promise to support him in future," Dodoo said.

Ahead of the 31st edition of AFCON in Gabon, ECO Bank in partnership with FUFA launched a fundraising drive "Tulumbe AFCON Nakajja" aimed at raising sh6bn, to ensure the team is comfortable and has a successful outing at the biennial championship.

According to FUFA vice Dennis Mbidde, contributions can be made in the Platinum and Silver Corporate contribution where sh10m and sh5m can be donated as a corporate entity and by individuals, who can contribute as low as sh10, 000 each at all ECO Bank branches and selected locations and by use of Mobile Money.

Mobile Money users can contribute by dialing *235# (MTN) and *185# on Airtel and following the prompts. Airtel customers are required to enter (900088) as the business numbers after selecting option three.