“The MPs should pay taxes like other citizens and who are they to be exempted,” says Byamugisha.

“The MPs should pay taxes like other citizens and who are they to be exempted,” says Byamugisha.

KAMPALA - President Yoweri Museveni’s position to tax MPs’ allowances and emoluments has received renewed support – this time from the people of Kigezi, including the mayor of Kabale and clerics.

The president refused to assent to the Income Tax Amendment Bill 2016.

“I want to thank President Museveni for saying no that the MPs shouldn’t be exempted from paying taxes,” said Batanyenda.

“The MPs should pay taxes like other citizens, and who are they to be exempted?” he said.

The mayor promised to mobilize the locals to hold a peaceful demonstration in Kabale town against the lawmakers tax exemption move.

A campaign to back President Museveni on the matter was launched in Kampala last week and will be conducted in every district. 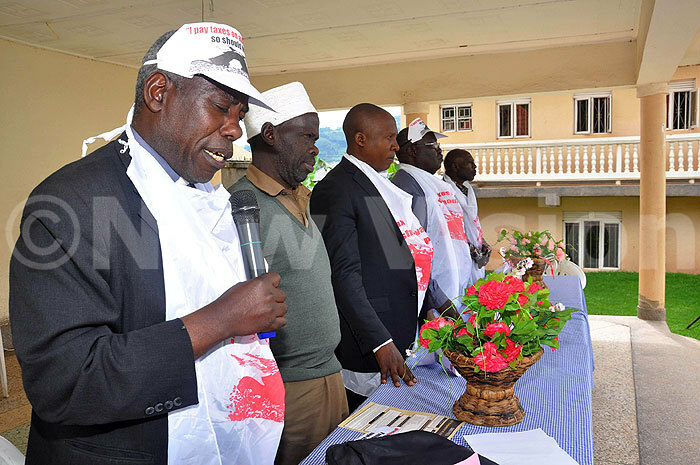 From left, Rev. Dr. Ephraim Mbabazi of Kisoro, Sheikh Abdallah Mugisha, Robert Byamugisha the executive director of Kick Corruption Out of Uganda and Fr. Gaetano Batanyenda praying for citizens to back the idea of taxing MPs. (Credit: Francis Emorut)

The meeting was organized by Civil Society Budget Advocacy Group in conjunction with Kick Corruption Out of Uganda.

“Instead of the MPs paying taxes so that the money is used to buy drugs which are lacking in the health facilities, [they] are telling us about attending burials and weddings in their constituencies as if that is what we sent them to do,” said Batanyenda.

The outspoken cleric criticized lawmakers for being “selfish and greedy”.

For emphasis, he read (pictured below) Articles 17 and 79 of the Constitution which stipulate citizen’s obligation to pay taxes and the functions of MPs to make laws respectively. 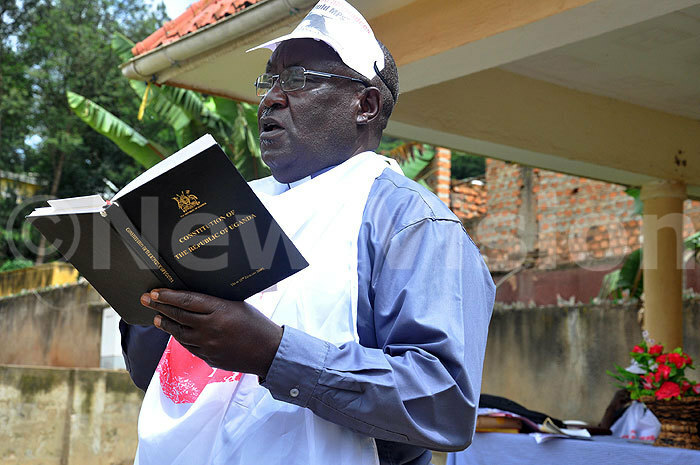 Rev. Dr. Emphraim Mbabazi from Kisoro urged citizens to support Museveni so that enough tax revenue is generated from MPs allowances so as to improve service delivery in the country.

The executive director of Kick Corruption Out of Uganda, Robert Byamugisha, urged citizens to sign a petition for President Museveni not to back down on MPs quest for tax exemption.

“It’s an obligation of every citizen to pay taxes for development. It’s a bloodstream network that connects us to other countries and without it, it cuts us away from development agenda,” he said.

Maurice Kaitaka, who is a lecturer at Kabale University, described the MPs’ resistance to pay taxes as corruption at the “highest level and robbery at noon”.

He called upon the district councils to debate the matter during their plenary sittings.

Schools struggle with USE