Singer Kanye West and President-elect Donald Trump arrive to speak with the press after their meetings at Trump Tower December 13, 2016 in New York. / AFP PHOTO / TIMOTHY A. CLARY

Rap superstar Kanye West on Tuesday delivered a surprise even in this most unusual of political years -- he met President-elect Donald Trump, marking the artist's first appearance since a reported mental breakdown.

An uncharacteristically taciturn West returned to the lobby 40 minutes later with the president-elect himself who, pressed on what the two discussed, said: "Life."

West, sporting a fitted black sweatshirt, at first stood sullenly with his arms folded as reporters peppered him with questions -- including on whether he would make good on his earlier promise to run for president in 2020, presumably challenging Trump.

"I'm just here to take a picture right now," West finally said before flashing a smile and a thumbs-up sign.

She has kept a low profile since gunmen broke into her Paris hotel room and robbed her of $10 million worth of jewelry -- and gossip pages have recently speculated on the state of the couple's marriage.

West last month stunned a California audience with a lengthy speech in which he said he did not vote but would have backed Trump as he appreciated the businessman's outspokenness. 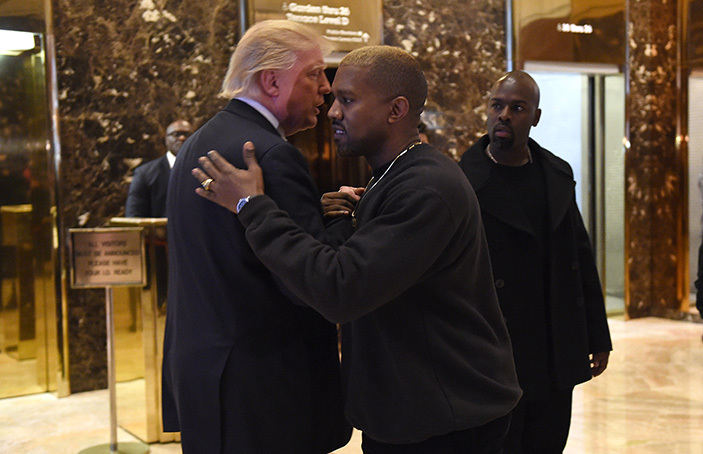 West was soon hospitalized after a series of erratic comments on stage, including alleging that his sometime collaborator Jay Z was sending hitmen to kill him and lashing out at Facebook founder Mark Zuckerberg for not paying West $53 million to relieve his personal debt.

The celebrity news website TMZ said that West's doctor feared he had suffered a mental breakdown and that West flew to New York on Monday to see a psychiatrist.

Trump, the former host of "Celebrity Apprentice," has been interviewing prospective members of his administration at Trump Tower, creating a media spectacle as candidates come to his door.

Few political observers would expect Yeezy to land in the cabinet, even with Trump's penchant for unexpected picks.

One possible explanation for the meeting is that Trump has been eager to tap A-list musicians for his inauguration after so many celebrities rejected him during the campaign.

The New York Post reported that Trump will also meet the Italian tenor Andrea Bocelli, who is performing Thursday at Madison Square Garden, and use their past ties to appeal for him to perform at the January 20 inauguration.

West is also one of the few prominent African Americans to embrace Trump, whose election win stemmed from overwhelming support from white working-class men after a campaign in which the tycoon excoriated Mexicans, Muslims and other minorities.

West, whose pro-Trump speech set off boos at his concert, previously campaigned for President Barack Obama and accused president George W. Bush of not caring about African Americans after the slow response to Hurricane Katrina.

The 39-year-old was also among the first in hip-hop to speak forcefully against homophobia.

But West has drawn growing comparisons to Trump, especially since his 2014 marriage to Kardashian, with the rapper delighting in self-aggrandizing social media postings and criticism of establishment rules.

West has likened himself to Michelangelo and has alleged that the Grammys are rigged, threatening on Twitter to boycott the music industry awards if he is not nominated for Album of the Year. He was not -- although he is up in eight other categories.