So how has the kingdom prepared itself for the legal battle to defend its king?

So how has the kingdom prepared itself for the legal battle to defend its king?

Good morning, here's a look at what you will find in today's New Vision paper, which you can also read online in its entirety via our e-paper HERE

So, to begin with, find out how the Rwenzururu kingdom has prepared itself for the legal battle to defend its king, who was arrested after the bloody clashes at his palace.

Meanwhile, Uganda has launched the biggest solar project in East Africa. Find out where this power station is located, how much power it is producing and how many people are benefiting from it.

Do not miss to know why Museveni has toured Mabira Forest and what he found there.

The government has stopped issuing retail trade licenses to foreigners. Find out what will happen to those who are already in retail business.

In a ray of hope for Kasokoso and Bukasa residents, the forestry authority has asked people with land titles to present them. Where, how and why? New Vision has the details.

The National Medical Stores has run out of funds to buy malaria drugs.  Get the full report and how hospitals are coping with patients. 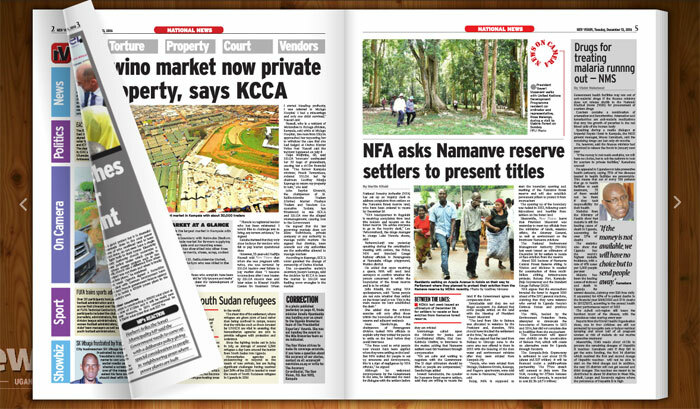 We bring you circumstances under which the Government has surrendered two UPE schools to Mukono diocese. What plans does the diocese have for these schools? More inside New Vision.

Uganda will now be able to respond quickly to emergencies in South Sudan after getting a donation from the United Nations. Find out what donation Uganda has got and how it will help in its emergency response.

Find out the new owner of Owino Market. KCCA has just announced that the market is now a private property.

Read about the new youth policy and what solutions it offers to solve unemployment.

Is it no longer defiance for FDC?  The party has called on its members to massively contest for the local council positions. Do not miss the FDC strategy, and which leader has urged its members to participate in the LC elections.

We bring you the reasons why MPs want FORCED national service for university graduates, And when they want it to start.

Don't forget that you can read the whole paper in your palm. CLICK HERE

4 in camp for world road championship

4 in camp for world road championship