Hands Up For HIV Prevention, is the global theme for Commemoration of this year’s World AIDS Day and when simply stated, it means one is in it to prevent HIV infection. On being contextualised to fit the Uganda, setting, the global theme evolved into the national theme “Joining Hands to Scale Up HIV Prevention”. 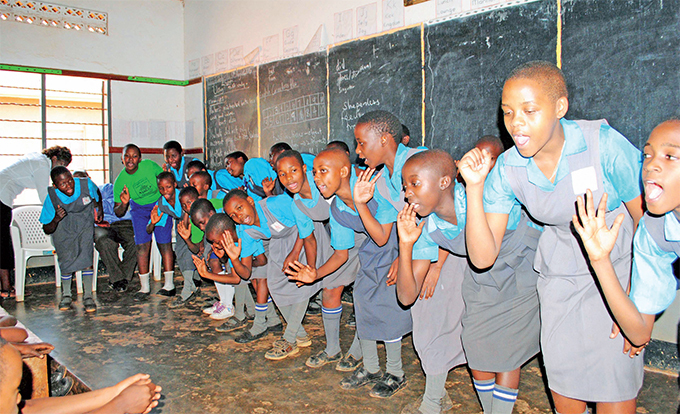 A Vision Group staff writes a message in memory of her loved one and in support of those living with HIV/AIDs last year. Denis Kibira of HEPSUganda says testing is the first step to eliminating the epidemic

A 24-year-old student at a tertiary institution in Kampala, narrated: “I have always wanted to do that test, but it is just scary. The other day, a certain organization camped at our hostel for over a week, carrying out free HIV tests. I was praying for the day I would leave my room and find that they have left. They made me feel guilty, seeing that I do not know my HIV status. I just have not got the courage to do it. Not now. I think if I ever tested positive, I would slip into a depression and die before the virus gets a hold of me.

Option B+ will ensure an HIV/AIDS-free generation

Couples living with HIV can have babies, who are HIV-negative, thanks to prevention of mother-to-child treatment. WHO recommends that all expectant mothers get tested

Without treatment, the likelihood of HIV passing from mother-to-child is 15% to 45%. However, antiretroviral treatment and other drugs used to prevent mother-to-child transmission (PMTCT) of HIV/AIDS, can reduce this risk to below 5%, according to the World Health Organisation.

A dusty outpost in Busia district on the Uganda-Kenya border comes to life at night. Parked trucks line the highway, while bicycle taxis hustle for business. Music blares out of the bars, alcohol flows freely and sex workers gather seeking out clients. It is here that Samuel Mwangi, a 60-year-old truck  driver, makes a confession. “We stop here to fuel, drink alcohol and buy prostitutes,” he says

Room for improvement in delivery of HIV services

Although Uganda has managed to reduce the prevalence of HIV drastically from 30% in the 1990s to 7.3%, the battle is still on. According to Dr Charles Kiyaga, a national diagnostics programme coordinator at the health ministry: “We can’t say we have won. There is room for improvement.” Civil society organisations (CSOs) and people living with HIV believe that HIV response in Uganda requires urgent corrective action in order to see the country on track to achieve comprehensive HIV services and the Global targets campaign by 2020