Sixteen days of Activism
Next Story

Early this month, Super brands East Africa celebrated 53 of the region's top brands at a memorable tribute awards ceremony that was held at the Villa Rosa Kempinski in Nairobi, Kenya. The 53 exceptional brands are from Kenya, Uganda, and Tanzania. Kenyan companies dominated the list with 33 companies, followed by Tanzania with 14 companies while Uganda had only six. Ugandan companies that were celebrated included, Bank of Baroda, Crestanks,

NTV Uganda, Radio One, Roofings Group and Splash Juices. Also to note, is that out of the 53 strongest brands that were announced as the strongest brands in the region majority are local companies, which is big achievement in brand building. "This year we honour 53 brands, from over 10 industries, across three countries and touching more than 100,000,000 lives. This is the power and reach of East Africa's most relevant brands," Jawad Jaffer, project director and associate publisher Superbrands East Africa says. Kenya's first Lady Margaret Kenyatta, graced the evening as guest-of-honour and accepted the illustrious Cooperate Social Responsibility (CSR) award for her initiative Beyond Zero.

Beyond Zero is featured in this year's Superbrands Volume IV book for its tremendous work in improving maternal and child healthcare in Kenya. Jaffer says Superbrands recognises the importance of CSR and the need to drive the conversation of what brands are doing on this leading edge. "We always celebrate the best CSR initiatives," Jaffer says. He says Superbrands has been examining and celebrating the world's strongest brands since 1995. "What started as an industry award has become a globally recognised barometer of the most iconic brands. It was honour to celebrate all the outstanding brands in the region," Jaffer says. Whereas the shift from simple products to brands may seem like a relatively new phenomenon, the concept has been in existence since the time people created goods to trade. Jaffer explains that, from ancient Babylon and the spice route traders to the Chinese dynasties, symbols, trademarks and signage have been a part of our social fabric. "Superbrands is excited to pay tribute to the most valued brands in East Africa at this tribute awards ceremony, each one, be it internationally

known or home-grown has connected their story to consumers through hard work and determination to provide quality," Jaffer says. He says in the history of branding there has never been a more relevant time to identify and celebrate the region's leading brands, than now. "Brands no longer compete locally but rather on the global stage. It has become

loyal consumers," he says. Those with the greatest equity will stand above the rest

as they engage meaningfully each and every day.

According to Jaffer, the selection process is divided into seven steps whereby the official rankings are originated from a combination of feedback from experts (Superbrands East Africa council members) and consumer surveys. The council consists of a group of exceptional entrepreneurs who have a deep appreciation of the ‘brandscape' in the region. Some of these council members include Mohamed Dewji (METL, Tanzania), Sameer Merali (Sameer Investments) and Vimal Shah (Bidco Africa). To ensure credibility and legitimacy of the process, London based ‘The Centre for Brand Analysis' (TCBA) appointed TNS RMS International research firm to conduct the required fieldwork in East Africa. A consumer survey focusing on reliability, quality and distinctiveness of the brand was put together based on the shortlist of brands provided by the council members. The research spanned over a two-year period.

Superbrands is the world's largest independent arbiter of branding. It identifies and pays tribute to exceptional brands by recognizing, rewarding and reinforcing leading brands from all over the world. The organisation runs the Superbrands award schemes and promotional programmes, each with a brand focused publication at its core. Superbrand status strengthens a brand's position, adds prestige and sets the brand apart from its competitors. Superbrands East Africa is an affi liate of Londonbased Super-brands UK. It has launched programmes in over 88 countries including all the key global markets. These programmes aim to identify those brands that are performing above and beyond others within the market. In East Africa they operate in Kenya, Tanzania and Uganda, and this was the fourth ceremony since 2008 and it on a bi-annual basis.

Each brand which qualifies is invited to join a membership programme administered by Superbrands Ltd. For those brands choosing to join, a membership fee is payable. The benefits offered to member brands include among others engaging consumers. Apparently distribution of the book and online promotions by Superbrands in the domestic and foreign markets will reach new potential customers worldwide. This ultimately helps drive sales. Research by the Nielsen Company across 48 countries shows that 74% of consumers who recognize the Superbrands Seal claimed to be more likely or much more likely to purchase products or service associated with the Superbrands Award Seal, and 69% would be more likely or much more likely to recommend the product/ service to a friend. This strategy also helps to infl uence key decisions makers. It also presents an opportunity tomake the most of one's brand's strength. Superbrand status is a powerful message for one's customers, employees, and company stakeholders.

Roofings Group, the leading steel manufacturers in East Africa, have attained the prestigious Superbrands status for being among the top quality brands in East Africa and the world at large.

Roofings is among the six that were the only Ugandan brands which are on the list of the 53 top East African brands. It was released this month by Superbrands East Africa.

There are 33 Kenyan companies on the list, while Tanzania has 14.According to Oliver Lalani, the Roofings Group executive director, attaining the superbrands status is a big reward for all the hard work they have put into the brand over the last 22 years.

"Being selected as a Superbrand is not an easy feat since you are assessed by an independent jury together with the public on whether a brand indeed qualifies as a Superbrand," Lalani says.

Lalani says right from the start, the company always went an extra mile to ensure they do things the right way. "Our number one philosophy is to provide a product that is consistently manufactured as per the minimum required standard. The materials we procure, the technology we employ and the process controls, together with a competent workforce have led us to achieve a stable, high quality product which we pride ourselves in," Lalani says.

He notes that having the right product is not sufficient, but other factors such as distribution channels or accessibility are equally important to ensure that the consumer gets the right experience in purchasing the product.

Today, roofings products are available in all the East African partner states and beyond.

Lalani assures clients that Roofings shall continue to deliver and offer the highest quality products at the right price, in time to the ever growing needs of customers.

"We are comfortably positioned to serve the market for years to come and understand the need to innovate and grow our product range. The recent launch of our Aluminium/zinc coated roofing sheets is a testimony to this," Lalani says.

Over the last 15 years, Roofings Group has made various investments, especially with the conception of the Roofings Rolling Mills plant in Namanve, which has put the company in better position to serve the future needs of the customers.

"We strive to be a one-stop shop for all steel construction related materials, which shows in the range of products we supply. The introduction of our PVC/HDPE and PPR pipes has also helped us in this aim to serve the construction sector from one source," Lalani says.

Although there is a threat of fake products on the market, Lalani explains that Roofing's products meet the standards and have been labeled for easy identification.

"There has been a big threat of sub-standard goods entering into the market and this has led to various incidents where buildings have even collapsed. With Roofings, the consumers can rest assured that their structure will stand the test of time. Our products are also clearly labeled and identifiable in the market," he says.

Lalani says all Roofings' products are certified and meet minimum standards at all times.

"One example I can give is our TMT bars, which we produce in Namanve. We were the first company in East Africa to mark each and every bar with our name, the strength and even the nominal diameter, so that consumers are no longer cheated in the market where they are sold 10mm bars instead of 12mm bars," Lalani says.

He advises their customers, that when purchasing Roofings' products they should always look out for the marking on the product itself, and to buy from reputable hardware shops near them.

Thankful to their clients

He commended the customers for the confidence, commitment and support they have shown the company over the years.

"It makes us very proud to know that we are the preferred steel construction materials supplier for the wider population and it is this pride that makes us strive to continuously improve on our product offerings and customer service level enhancement," Lalani says.

The company plans to develop a steel making unit which can use local iron ore to make value-added products for the construction sector. 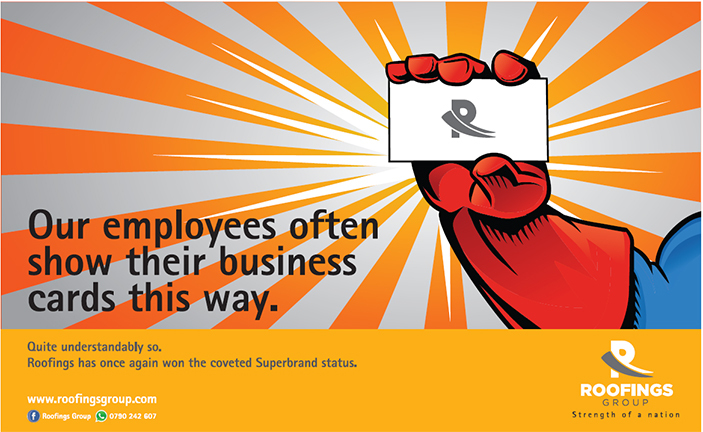 I was sexually abused by Greenhalgh - Bad Black