Government has finalized the drafting of a national policy on migration, according to the 2nd deputy Prime Minister Kirunda Kivejinja.

Kivejinja said the comprehensive policy will guide the management of the country's internal, intra-regional and international migration flows.

"Its aim is to promote the benefits and minimize the costs of migration in the country and the region at large," he added.

He noted that the policy prioritizes activities such as the collection and dissemination of migration data, the establishment of a coherent institutional framework, and resource mobilization for implementation.

Kivejinja added that it also covers the important linkages between migration and climate change, health, trade, tourism, education and gender.

"Migration is desirable, when it is well managed and with this policy the government has taken a resolute step towards enhanced migration governance. It has now outlined its whole-of-government vision for managing migration and commitment to mitigating the negative impacts of migration, while at the same time fully embracing its developmental potential," Kivejinja said.

He revealed this during the first IGAD ministerial meeting on migration held at Speke Resort Hotel Munyonyo Kampala on Thursday.

Under the theme Migration Policy Development, two technical meetings were held between 7th and 9th November preceding the ministerial meeting.

Kirunda noted that attempts in the past in Uganda to intervene and respond to migration issues have been piecemeal and fragmented in character and lacked policy coherence.

"The National Migration Policy will promote a comprehensive and sustainable approach to the management of migration for the development of Uganda and the East African region," he said.

The State Minister for Internal Affairs Obiga Kania it is imperative for the IGAD member states to come up with migration policies which address all aspects of migration for the development of the individual partner states.

"It is these well-thought out policies which will enable us as ministers' and practitioners to come up with better methods of work which will enhance trade in the region, science, education and investment," he said.

He added that this can help governments to tackle poverty, unemployment, rights of migrant workers and reap from the remittances which accrue from external labour. 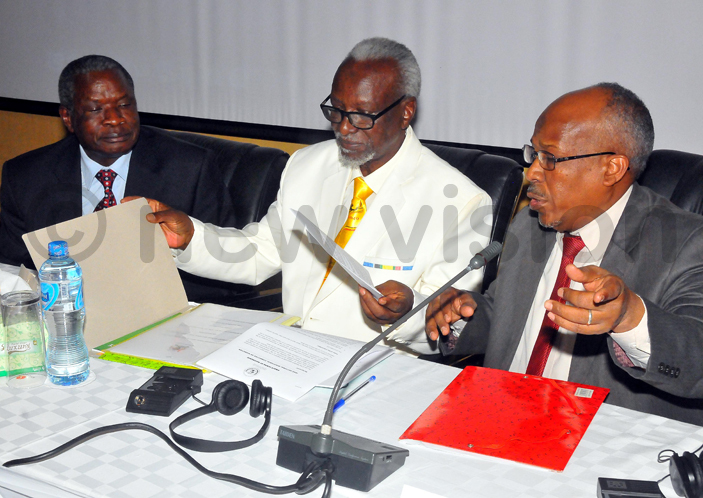 The ministers from the region deliberated on the recommendations of the technical teams and established the Sectorial Ministerial Committee on Migration as Part of IGAD policy organs.

One of the main recommendations from RMPF is to have a strong IGAD institutional framework in order to implement, monitor and evaluate the IGAD RMPF.

This calls for the strengthening of migration governance within IGAD at both national and regional levels.

Elsadig Abdallah, who represented the IGAD executive secretary, commended the meeting as a step forward in the positive direction.

"The issue of migration has become an important socio-economic challenge which needs to be fixed. We are thus committed to bringing the migration agenda at the forefront. IGAD, therefore, need a regional approach, which is committed to promoting the rights of all migrants in member states and smooth cross-border mobility," he said.

Charles Kwenin, the representative of the director general of the International Organisation for Migration (IOM), lauded the government of Switzerland for funding the process of formalizing migration processes in the IGAD region

"IOM is happy to associate with IGAD on migration governance. IGAD is so far the only region with such a framework and we wish to thank the region, especially Uganda and Kenya for making tremendous strides in migration policy. IOM wishes for a policy that promotes rights of citizens and those migrating. Free movement of people facilitates the regional integration of Africa."

He said the region hosts over 1.2 million refugees from Somalia, urging political leaders to take caution to avoid upheavals that catalyse migration.

Mariam Yassin Hagi Yussuf, the Somali special envoy for children and migrants' rights said their government had finalized the state building process and continues to liberate the country from enemies who do not want the Somali people to live in peace.

"Due to improved security, Somalis in diaspora are returning home to participate in the development process by actively engaging in the public and private sector," she said.

She said that Somalia is welcoming labour migrants from IGAD region and other African countries.

"We formalize the presence of the African labour migrants through the issuance of work permits," she added.

Raiw Gatlier Gai Chuol, deputy minister of interior of South Sudan said the government was committed to addressing the root causes of irregular and illegal migration such as insecurity, lack of education and livelihood opportunities, poverty and unemployment.

"Our women and men in uniform as well as national intelligence agency are in front line in this regard," he said.

The resistible return of Nicolas Sarkozy