Future at stake as Americans choose next p...
Next Story

None of these early results were a surprise and all eyes were fixed on key swing states like Florida or Pennsylvania.

None of these early results were a surprise and all eyes were fixed on key swing states like Florida or Pennsylvania.

Hillary Clinton and Donald Trump locked up their first state wins Tuesday as polling stations closed in the eastern United States, with the world waiting anxiously to see who will head to the White House.

Some 200 million Americans were asked to make a historic choice -- between electing the nation's first woman president, or handing the reins of power to a billionaire populist who has upended US politics with his improbable outsider campaign.

With voting over in a handful of states and Americans queueing to cast their ballots farther west, television networks called Indiana, Kentucky and West Virginia for the Republican Trump, and Vermont for the veteran Democrat. 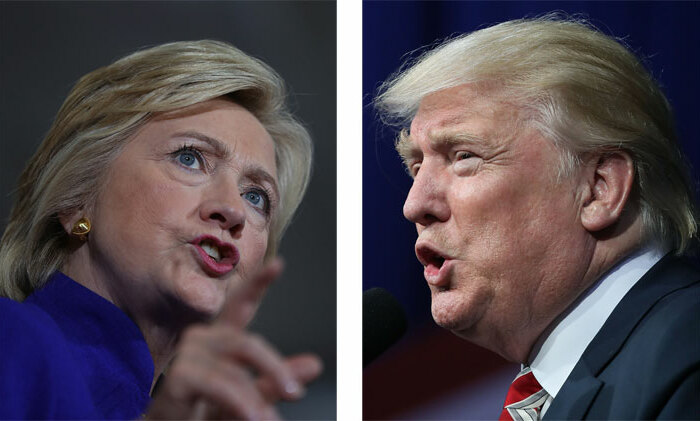 None of these early results were a surprise and all eyes were fixed on key swing states like Florida or Pennsylvania that will likely decide the result of the long, bruising contest for the right to lead the world's biggest economy.

Clinton went into the day with a slim opinion poll lead and a more obvious route to winning the key states that will decide the electoral college.

But at the venue where Trump will hold his planned victory party in New York, supporters were upbeat, expressing confidence that he would stage a major political upset.

"We feel very good about where we are right now, about the turnout numbers we're seeing in record numbers in the areas we need," said John Fredericks, Trump's Virginia state chairman.

From crowded Manhattan to Virginia horse country to balmy California, long lines snaked into the streets outside polling stations.

"Hillary, she has a history," said Charmaine Smith, 50, a retail manager as she cast her ballot in Harlem. "All Trump has is the bullying." 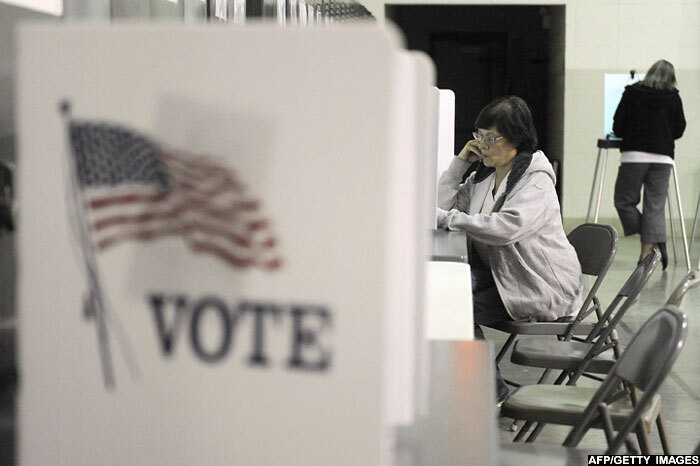 A woman fills out her ballot at the Missouri National Guard Armory in Lebanon, Missouri

An hour's drive north, a crowd of admirers chanted "Madam President" as Clinton and her husband Bill, the former president, voted near their home in Chappaqua, before emerging to shake hands and chat with the crowd.

"So many people are counting on the outcome of this election, what it means for our country," the 69-year-old secretary of state said. "And I'll do the very best I can if I'm fortunate enough to win today."

An exit poll by CNN however found that only four in 10 voters were optimistic that incumbent president Barack Obama's successor would do any better than he has during his two terms in office.

Trump, 70, cast his ballot alongside his wife Melania in a Manhattan school gymnasium.

"Right now it's looking very good," he told reporters -- paying no heed to protesters who welcomed him with chants of "New York hates you!"

But as the clock ticked down towards the close of polling, the Republican issued a last-minute appeal to voters, especially in Florida -- without which his path to the presidency is slim at best.

"Don't let up, keep getting out to vote - this election is FAR FROM OVER! We are doing well but there is much time left. GO FLORIDA!" Trump tweeted -- looking to garner 11th hour votes. 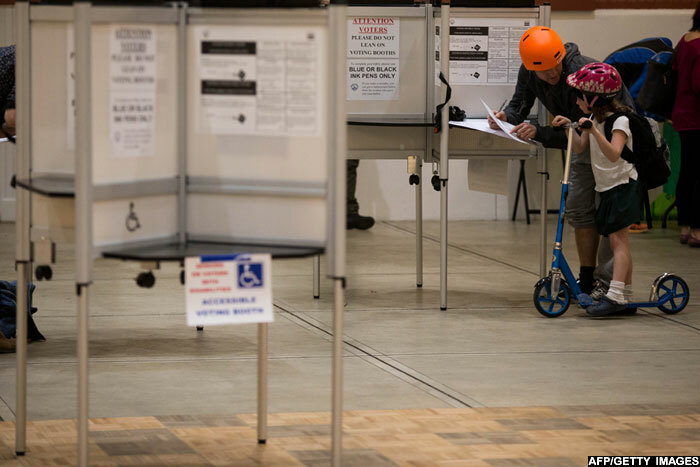 Eric Adler casts a vote with Olive Wooding Adler during the 2016 Election at Eastern Market in Washington, D.C.

The 2016 race was the most bruising in modern memory.

Obama's election eight years ago as the nation's first black president had raised hopes of uniting Americans, but the current contest has only highlighted the country's divisions -- and the fact that voters are not necessarily happy with their options.

Exit polls by ABC News and NBC News found that both Clinton and Trump are seen as untrustworthy by majorities of voters, while most find Trump's temperament unpresidential.

Most voters told ABC that the economy was the most important issue or them, but were evenly divided on which candidate would handle it better, so the final result may come down to turnout.

The exit polls, and reports coming in from polling stations around the country, suggested that Latino turnout was high and that this would favor Clinton over the anti-immigration candidate, Trump.

Trump's campaign spooked world markets seeking stability after the recent global slowdown, but stocks rose for a second straight day Tuesday on the expectation that Clinton will prevail. 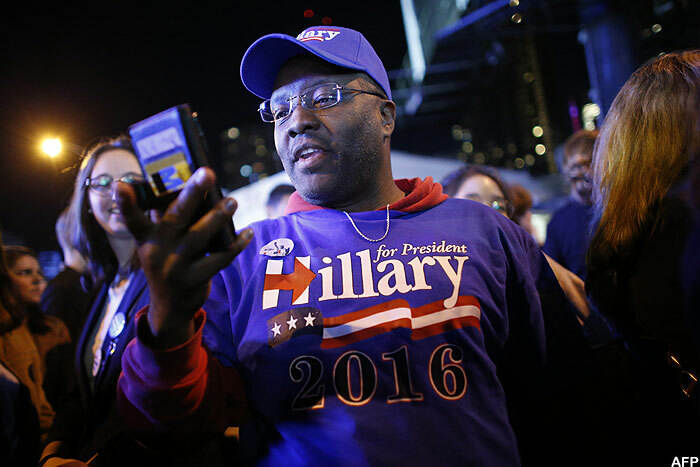 A supporter of Democratic presidential nominee Hillary Clinton looks at this phone outside the Jacob K. Javits Convention Center as he waits for election results in New York

A polling average by tracker site RealClearPolitics gave Clinton a 3.3-percentage point national lead, but Trump had the advantage in several of the swing states that he must conquer to pull off an upset.

In the heavily Latino neighborhood of East Los Angeles, Mexican-Americans Margarito Salinas, 88, and friend Guadalupe Cobian, 64 said their choice was an easy one.

"That guy is a Nazi," Salinas said of Trump. "My vote is for La Senora."

Clinton conducted six radio interviews in the lull after casting her ballot, when candidates suddenly have hours of downtime following a non-stop campaign that ended in the early hours of Tuesday.

She has urged citizens to vote for a more "big-hearted" America.

"I hope to be remembered as someone who began to help heal our country, to overcome the divide, the very unfortunate feeling that a lot of people have that this election was very much filled with nastiness and negativity," she told WOKQ. 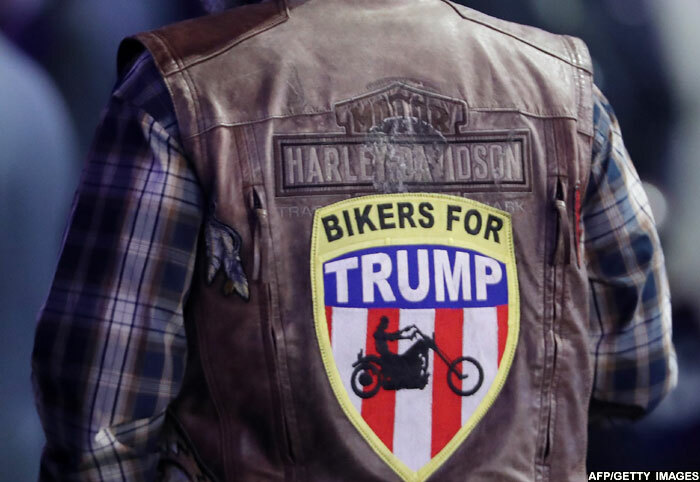 Trump pressed his message with voters who feel left behind by globalization and social change, wrapping up with a flourish in Michigan after midnight and predicting a historic upset.

"Today the American working class is going to strike back, finally," he said.

Even then, questions remain. Trump has repeatedly claimed Democrats and the media are seeking to rig the race and said last month that he may not accept the result if he thinks voting is unfair.

Asked at his polling place whether he would concede if networks call the election for Clinton, Trump said: "We'll see what happens."

Banning independents is no solution to party cohesion