Court to rule on Equity Bank fraud case
Next Story

Members of Parliament have asked the Uganda Peoples Defense Force promotions board and commander in Chief President Yoweri Museveni to promote the late Maj. Gen. Dr. Julius Oketta ,60, to the rank of general. 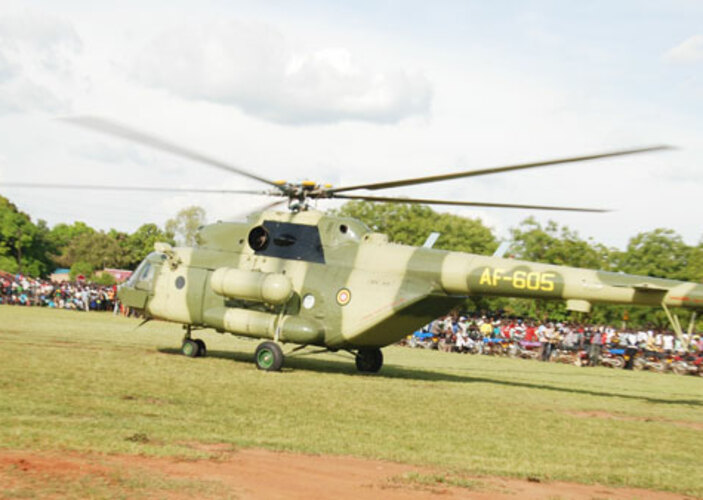 MPs led by Denis Hamson Obua, (Ajuri county) had sacrificed a lot to liberate and bring security to Uganda. "He dodged bullets at night, sacrificing his life for the sake of Uganda. He has served for over 20 years in the army. Those who joined later have obtained his same rank, while others have passed him," Obua said. Obua proposed that the late be made a general even after he had died.

Oketta was an army representative in Parliament serving the 8th and 9th Parliaments. Museveni appointed him this year to become the deputy head of the Operation Wealth Creation (OWC). OWC is headed by Gen. Salim Saleh. Obua said Oketta's dream was to see that OWC did not operate in ad hoc manner. "He wanted OWC to get a legal framework for it to function well," Obua said.

Oketta, who was also serving as the director of the National Emergency Coordination and Operations Center in the Office of the Prime Minister passed away on Saturday morning. The post mortem report showed that Oketta died of a blood clot in the lungs (pulmonary embolism).

He is survived by a widow Stella Oketta and nine children, five boys, four girls. The MPs made the request while paying tribute to the late Oketta during a special sitting of Parliament.

Busiro East MP, Medard Sseggona argued that promotions in the UPDF were not fair because people like the late Oketta had remained at the same rank for decades. Sseguya said others who joined with the late were now generals. Sseggona said people should not be afraid to talk about unfairness to enable them get corrected. Sseggona added that Oketta should be made a general even in death because of his exceptional contribution to the liberation struggle and the security of Uganda.

The minister of agriculture Vincent Ssempijja described Oketta as a practical farmer who has spearheaded the Operation Wealth creation campaign country wide through distributing seedlings to all people irrespective of their status.

"Last month while commemorating the World food day we marched with the late in Lira Town preaching to people the importance of food security. Oketta moved from door to door encouraging and explaining to people to take different seedlings which grow well in different  areas, " Ssempijja said.

Katikamu North MP Edward Ssembatya said people like him and many others will miss Okettta. He said Oketta encouraged many people in Luweero to take up farming and also to improve their farming practises." Many people have benefited from Oketta's advise, others benefitted from the free  distribution of free fruit  seedlings, piggery, goats, coffee, among others." said Ssembatya said.

Winnie Kiiza leader of opposition in Parliament said that late was an excellent and smart officer in his outfit and in character. Kiiza said Oketta flashed no academic credentials while serving ordinary people. "He was just ready to serve despite the challenges in the design in Operation Wealth Creation," Kiiza said.

Prime Minister Ruhakana Rugunda said with Oketta's presence in OWC they were assured all the tasks would be accomplished well.

Syda Bbumba, chairperson Parliament's committee on national economy said Oketta was very instrumental in building OWC. "He is a good team builder. The strong foundation he has put up will set OWC succeed".

Bright Rwamirama, state minister for agriculture said Oketta was very passionate about OWC. "I chaired an inter-ministerial committee meeting on OWC and Oketta was very eager to see that we complete the meetings and implement what we agree on," Rwamirama said. Gen Elly Tumwine (UPDF representative) said Oketta was a farmer's general and peoples general.

Oketta was a great fighter - Museveni 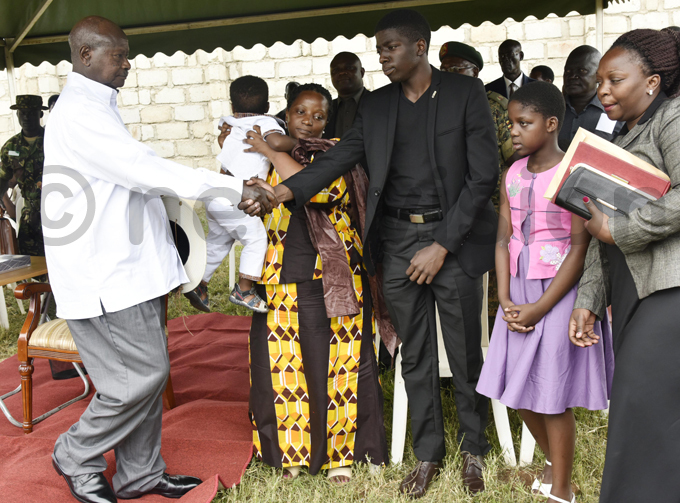 "I came here to pay condolences for the death of the late Oketta. Oketta was one of the young men whom we got from Uganda National Liberation Army (UNLA). He was part of the group that was fighting us in Mbarara. I told them to stop fighting and they came out peacefully," Museveni said referring to the long military journey that Oketta has walked with the UPDF.

Oketta, 60, succumbed to a blood clot on Saturday morning at Kadic Hospital. 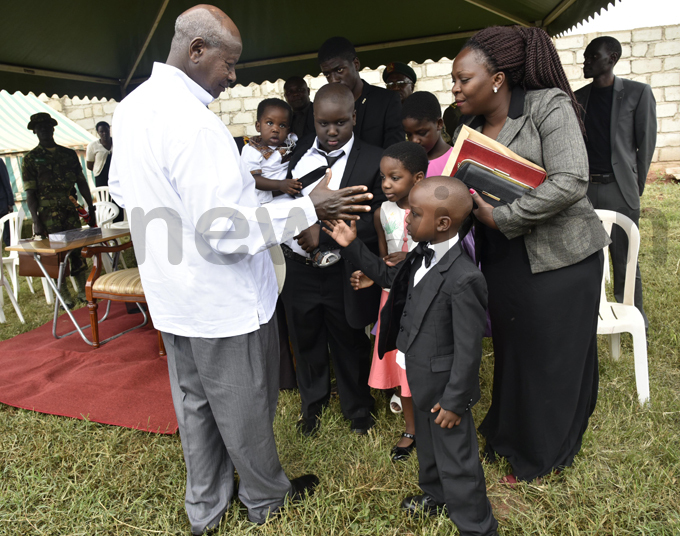 Museveni, who said he was scheduled to travel to Ethiopia later today for a conference, today morning visited the family of Oketta in Kyanja, Waakiso district, to among other things commensurate with the family and also pay tribute to the late Oketta.

He laid a wreath on Oketta's casket, held a brief meeting with the widow, children and family members, before addressing mourners at Oketta's home.

"Oketta was in the 23rd battalion. That is the battalion that fought very well in Corner Kilak in January 1987. There was a big battle against the other confused woman called Lakwena. 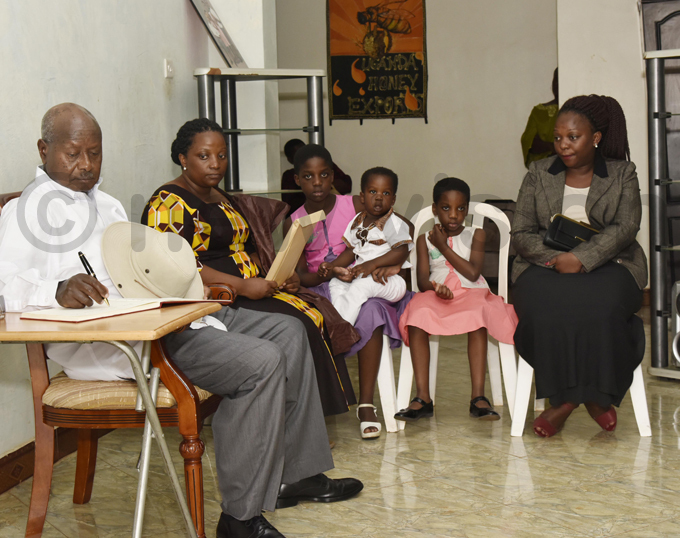 Oketta was very active. Apart from the army work, he was one of the volunteers, who fought against Ebola in West Africa.  He was known in the whole of Africa," he said.

Museveni urged senior army officers to go for medical checkups and also carry out daily exercises to avoid the onslaught that non-communicable diseases have kicked up in the top rank and file of the UPDF.

"I was therefore surprised that he had died. He looked healthy and had no problem. But apparently, he had a complaint about the chest. He was supped to go to India (for an operation). 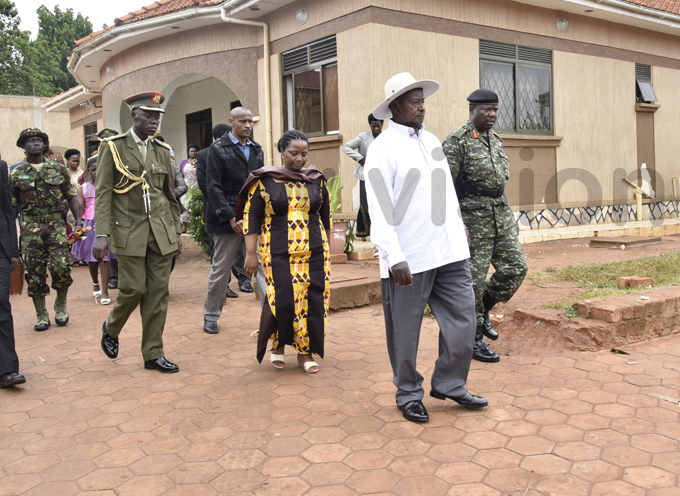 Earlier, I also heard that he had a problem of the blood clot, which I didn't know about. So, in the army we shall have to discuss the issue of medical check-up," he said.

Museveni said, he would not be able to attend the burial ceremony tomorrow in Gulu due to the commitment in Ethiopia.