MENU
In Africa, little enthusiasm for US vote after Obama
Previous Story

Trump and Clinton tout rival visions of US to seal deal

An average of Pennsylvania polls gives Clinton a 2.6 percentage point edge in the state

An average of Pennsylvania polls gives Clinton a 2.6 percentage point edge in the state

Beyonce, Hillary Clinton and Jay Z appear on stage during a Get Out The Vote concert at Wolstein Center on Friday in Cleveland, Ohio. AFP Photo

US presidential foes Hillary Clinton and Donald Trump brandished rival visions of America on Friday and the world held its breath as they headed into a fierce final weekend of campaigning.

Forecasts based on polling averages still give the Democrat an edge over the 70-year-old property mogul but the Republican has been buoyed by signs that he is closing the gap in key swing states.

So both headed Friday to the industrial northeast, where blue-collar voters that were once reliable Democrats may be tempted by Trump's protectionist promise to repatriate jobs from Mexico and China.

The prospect that the November 8 vote will be close or that a once unlikely Trump victory could presage instability and recession has rocked markets.

The S&P 500 stock index closed down for the ninth straight day Friday, and the leaders of America's friends and foes alike are watching in amazement as the world's most powerful nation turns on itself.

Clinton was in Detroit, where supporters booed her populist rival when she attacked his affinity for Russian President Vladimir Putin and "dark vision" of an America mired in poverty and corruption.

"When I hear my opponent talking about America I don't recognize it," she declared, touting her own "confident, optimistic, inclusive" vision, building on President Barack Obama's legacy.

Jokes were thin on the ground in her speech, but the crowd laughed in delight when she mocked the New York billionaire, who avoided the Vietnam War draft, for wearing a camouflage baseball cap.

Trump has run one of the most aggressive and populist campaigns in history -- browbeating his Republican primary rivals into submission before launching into Clinton, "such a nasty woman."

Trump was in Hershey, Pennsylvania bidding to use his popularity with the white, male working class to smash a hole in the "firewall" pollsters once thought Clintonenjoyed in Democrat-leaning states.

"I want the entire corrupt Washington establishment to hear the words we're about to say. When we win on November 8 we're going to 'drain the swamp'," he said, as the 13,000-strong crowd took up the chant.

He predicted that Clinton will face prosecution after an FBI inquiry into her inappropriate use of private email when she was secretary of state, and vowed to tear up current US free trade deals.

"We are gonna win Pennsylvania big," he said, mocking Hillary's celebrity endorsements. "And by the way, I didn't have to bring J-Lo or Jay-Z. I'm here all by myself."

The rapper Jay-Z and his superstar singer wife Beyonce were to join Clinton at an event later on Friday.

'As corrupt as they come'

An average of Pennsylvania polls compiled by tracker RealClearPolitics gives Clinton a 2.6 percentage point edge in the state, but the huge crowd Trump drew was clearly in tune with his message. 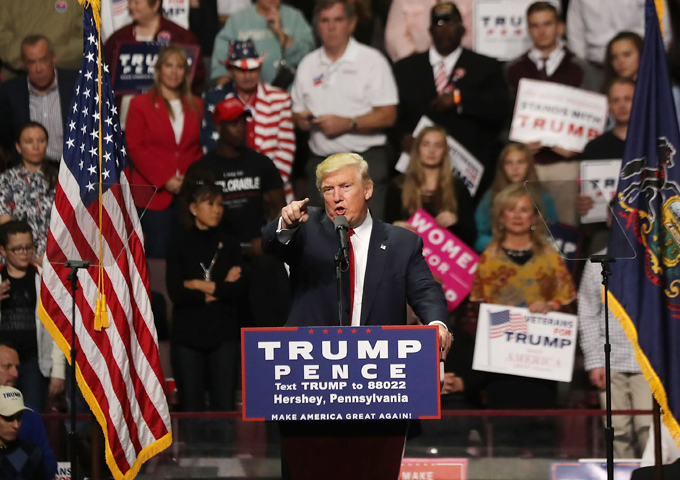 Donald Trump speaks at a rally on Friday in Hershey, Pennsylvania. AFP Photo

"Hillary is about as corrupt as they come," declared 27-year-old welder Logan Sechrist, who came to Hershey from Lebanon, Pennsylvania with his pregnant wife to hear Trump's plan for jobs.

"I think honestly we need somebody who's a businessman and not a politician," Sechrist said. "The country's falling apart. "We're ready for something different."

Zach Rehl, a 31-year-old Marine veteran, said previous Republican candidates had failed to speak up for factory workers who have seen their jobs head abroad under global trade rules.

"This thing hits people at home," he said, predicting that election night on Tuesday in Pennsylvania will be "pretty close."

Some of Clinton's supporters have a similar feeling -- or in their case a creeping dread.

Clinton's supporters were getting tense. "It's nerve-racking that Trump's gotten this far," said Rachel Zeolla, 27, who works in marketing, at an earlier rally in Pittsburgh.

For the first time some pollsters agree with them.

Pennsylvania, Michigan and perhaps Ohio were once seen as low hanging fruit for Clinton, guaranteeing her victory even if she doesn't pick off a prize like Florida -- but the race has tightened.

Nationwide polls still give the Democrat the lead, and she has some influential supporters on her side as she attempts to lock in victory in the closing days.

Obama himself has hit the trail, and on Friday the outgoing president fired up a crowd in swing state North Carolina with a warning not to let Trump's negative vision overwhelm his legacy.

"I need you to vote. Don't choose fear, choose vote," an exasperated Obama told the crowd, whipping up votes for fellow Democrat Clinton.

Intervening to stop supporters booing a pro-Trump protester, he resorted to the new catchphrase he uses to signal his mounting disbelief: "C'mon!"

"I want you to pay attention. If we lose focus, we could have problems," he warned.

Trump struggled to recover ground after footage emerged of showing him boasting of committing sexual assault and a dozen women came forward to allege he had groped them or otherwise engaged in sexual misconduct.

But, as the race nears its conclusion and with Clinton mired in the ongoing email scandal, profound Republican skepticism about his controversial candidacy appears to be ebbing.