Obama warns US fate in voters' hands as race narrows

PIC: US President Barack Obama speaks to a crowd of 16,000 people while campaigning for Democratic Presidential nominee Hillary Clinton at the University of Chapel Hill on Wednesday in Chapel Hill, North Carolina. (AFP/Getty Images)

The fate of American democracy is in voters' hands, President Barack Obama warned Wednesday, as Hillary Clinton and Donald Trump's battle for the White House went down to the wire.

With six days until the election, the world looked on agog as an uptick in support for Clinton's 70-year-old Republican rival delighted America's foes, made its allies queasy and spooked financial markets.

"The fate of the republic rests on your shoulders," the US president warned voters in North Carolina, one of a handful of swing states where the now tighter race will be decided.

"The fate of the world is teetering and you, North Carolina, are going to have to make sure that we push it in the right direction," he declared, rallying support for the Democrat Clinton to become his successor.

On Tuesday, Americans will chose between an elaborately-coiffed populist from the world of reality television and a Democrat vying with a contested record in government to become America's first woman president. 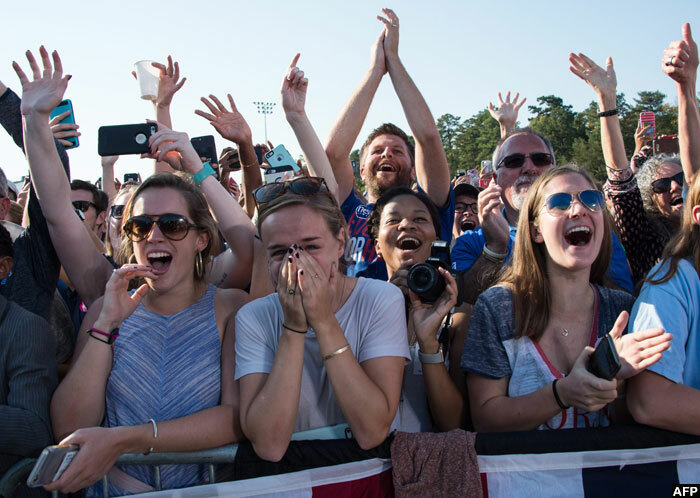 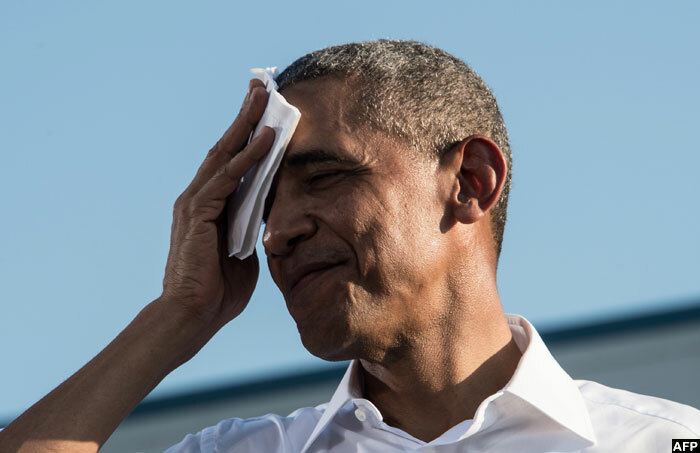 Obama wipes perspiration from his face after speaking at the rally

The Trump-Clinton choice has left many US voters cold and polling numbers volatile, making it hard to predict who has a lock on the key states that will decide who wins the electoral college.

Clinton remains ahead in most forecasts, but on Tuesday an ABC News/Washington Post tracking poll gave Trump a narrow lead, sending shock waves through markets that fear a Trump victory would trigger recession.

Trump -- a rambunctious real estate mogul -- has been hit by scandals that would have sunk a less brazen showman: accused of sexual assault, of not paying taxes and of ties to Russia's Vladimir Putin and the mob.

But renewed FBI scrutiny of Clinton's use of a private email server as secretary of state has helped mobilize the Republican's raucous fan base and underlined public doubts about the Democrat's trustworthiness.

"With less than a week to go, market opinion is coming to the conclusion that a Trump win would create too much uncertainty and is bad for risk sentiment generally," said Kit Juckes, analyst at banker Societe Generale.

US stocks followed the rest of the world's markets lower. The Dow fell 0.4 percent and the broader S&P 500 was off 0.7 percent at the close. Earlier major markets in Asia and Europe had tumbled more than one percent.

The dollar continued to slip against the euro, losing 0.3 percent from Tuesday to $1.1093, while the Mexican peso -- sensitive to Trump's threat to build a wall on the country's US border -- lost one percent.

The dramatic tightening in the opinion polls also frightened bookmakers. Ireland's Paddy Power had already paid out $1 million to punters who bet on Clinton, assuming her victory a foregone conclusion.

But on Wednesday, the firm said 91 percent of bets now favor Trump, whose odds have narrowed.

This week, US Secretary of State John Kerry admitted the campaign has been "downright embarrassing" as he deals with America's friends and foes abroad, and the latter were in full voice Wednesday.

Iran's supreme leader Ayatollah Ali Khamenei -- whose regime survives by painting America as a comic-book foe -- crowed that the "catastrophic reality" of the two candidates "goes beyond what even we were saying."

In Britain, a giant effigy of Trump wielding the head of his rival Clinton was to be burned during traditional November 5 bonfire night celebrations. 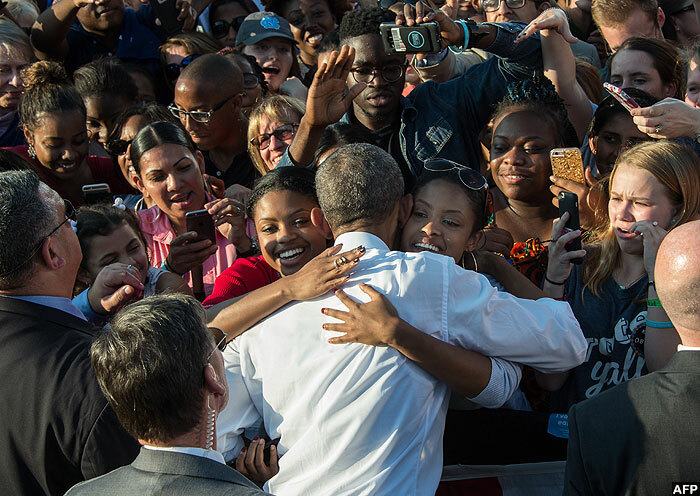 At the rally in North Carolina, Obama got a hug from two young women . . . 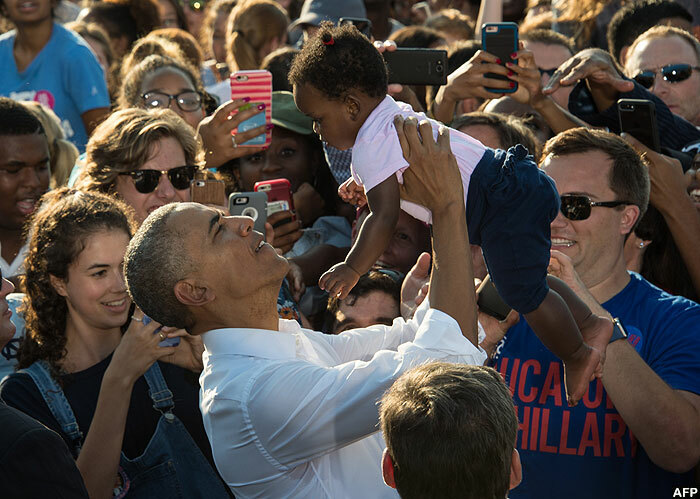 Back in the United States, the long and often unedifying 2016 White House race is now being fought in a few corners of a few states, most notably Florida, Ohio and North Carolina.

These three states offer the best chance for both candidates to cross the winning threshold of 270 out of 538 electoral college votes -- and to lock out their opponent.

But the two White House hopefuls have also placed some final long-shot bets.

Clinton travelled to Arizona, which Democrats haven't won since 1996 when her husband Bill claimed the presidency by a landslide, and was to speak later Wednesday.

An Emerson poll on Wednesday had Clinton losing the state by only four percentage points. But both of its Republican US Senators have opposed Trump, offering the tantalizing prospect of a shock Clinton win.

Meanwhile, Trump has raised eyebrows by campaigning in Wisconsin and Michigan, both traditionally Democratic states where polls show Clinton leading by six points or more.

And he spent most of Wednesday in Florida, which is likely to make-or-break his presidential dreams. The latest polls show him slightly behind Clinton in the state, but that did not dampen his rhetoric.

Appearing before supporters at a triumphal rally in Pensacola, Trump stuck closely to his now well rehearsed stump speech focused on his "contract with America, a plan to end government corruption."