"We have to be focused for 90 minutes, knowing they are going to provoke our mistakes because of the quality they have."

How will Guardiola work his way around his former club. (AFP)

"We have to be focused for 90 minutes, knowing they are going to provoke our mistakes because of the quality they have."

Stung by a chastening 4-0 defeat at the Camp Nou two weeks ago, Manchester City manager Pep Guardiola makes a second attempt to outwit his former club Barcelona in the Champions League on Tuesday.

Guardiola's men were undone by the second-half dismissal of goalkeeper Claudio Bravo on October 19, when Lionel Messi scored a hat-trick to propel his side five points clear of City at the Group C summit.

Another defeat would give Borussia Moenchengladbach and Celtic -- who meet in Germany -- an opportunity to overtake City and Guardiola knows his side face a major test of their nerve at the Etihad Stadium.

"We have to be focused for 90 minutes, knowing they are going to provoke our mistakes because of the quality they have," said Guardiola, who led Barcelona to European glory in 2009 and 2011. 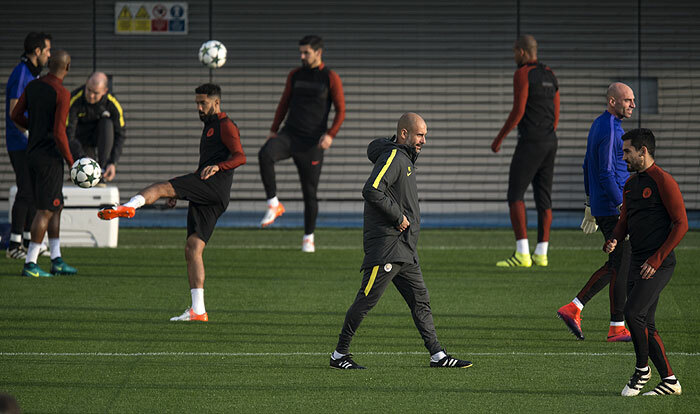 City will have to overturn a huge deficit. (AFP)

"Barcelona provoke your mistakes. But we had a few chances and have to keep going in that sense and try to finish better than we did in Barcelona.

"We will try. We will try it again. I've never thought we could not win. I have never entered a match thinking we can't win.

"We have to play almost perfectly to win, but if not we congratulate them and set our minds on the game against Celtic and in Moenchengladbach in a few weeks."

Barcelona are aiming for a sixth successive victory over City, who they eliminated from the Champions League in both 2013-14 and 2014-15.

Luis Enrique's side, European champions for a fifth time in 2015, require just a point to reach the last 16 and will be assured of first place if they win and Gladbach do not prevail at home to Celtic.

"I think it's a great opportunity for us to qualify," said the Barcelona coach.

"Obviously it won't be easy. We want to be first in the group. We will have to play very well, as we did in Camp Nou, with and without the ball."

Barca are currently on a four-game winning streak, but they arrived in Manchester on Monday with a depleted squad.

With Gerard Pique (ankle) and Jordi Alba (hamstring) absent, as well as Aleix Vidal (thigh), they are missing two first-choice defenders, while captain Andres Iniesta (knee) is also out and Jeremy Mathieu is suspended.

Celtic have just one point and will be eliminated if they lose and City avoid defeat, but manager Brendan Rodgers is looking at the bigger picture.

When asked if he felt the Scottish champions could be a last-16 side in the next couple of years, the former Liverpool boss replied: "I would hope so yes. That's the process we're beginning.

"This is what this experience of this competition has given us - the chance to build towards that." 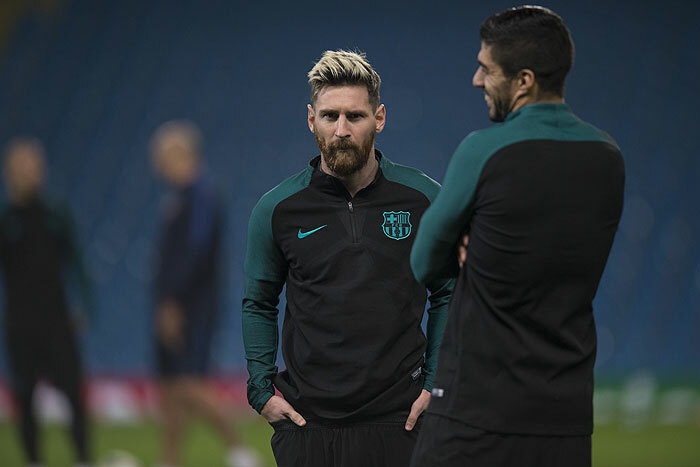 City will have find ways of how to stop Barcelona's Messi and Suarez. (AFP)

Arsenal could clinch qualification for the knockout stage yet again with a win when they take on Ludogorets in Bulgaria, provided Paris Saint-Germain avoid defeat in Basel. PSG are also in a position to seal their place in the last 16 for the fifth straight campaign.

Olivier Giroud is hoping to finally get a start for the Gunners as they aim to stay on track to finish first in Group A ahead of the derby against Tottenham Hotspur on Sunday.

Atletico Madrid are one of only three teams to have maximum points coming into matchday four and last season's runners-up can wrap up their last-16 spot with two games to spare when they host Champions League debutants Rostov.

Bayern Munich can also clinch qualification for the last 16 -- for the 14th season in a row -- as they visit PSV Eindhoven in the other Group D game.

In Group B, Dynamo Kiev visit Benfica knowing they could be condemned to an early exit if they lose and results elsewhere go against them.

The meeting of Besiktas and Napoli in Istanbul gets the action underway at 1745 GMT with the rest of the games kicking-off at 1945 GMT.

Makerere backtracks on suspension of students