Gov't to use drones to track poachers

"We want to deploy drones in our parks to ease the tracking of these poachers."

"We want to deploy drones in our parks to ease the tracking of these poachers."

KAMPALA - As one of ways of tackling the rising problem of poaching, the government is considering deployment of drones and the Global Positioning System (GPS) in all national parks.

Tourism minister Prof. Ephraim Kamuntu said drones will easily help them track down the poachers and get the real culprits.

"We want to deploy drones in our parks to ease the tracking of these poachers.  Government is very serious on the issue of poaching and we are committed to doing everything to protect our natural resource for economic purposes and the future generations to see," he said.

It is understood the Uganda Wildlife Authority (UWA) has also deployed 1,000 armed rangers in different parks and the body plans to deploy more to stop the vice.

"We are also working on putting up strong fences around parks to stop animals from attacking neighboring communities and to stop people from attacking animals."

Kamuntu said this while unveiling the Ishasha Uganda Wild Run due next weekend.

Kamuntu said the event is aimed at promoting wildlife conservation among communities and tourism in the country.

"Uganda's tourism is nature-based. People come here to see the mountain gorillas in Bwindi, climbing lions, Source of the Nile and Mountains of the Moon, among others. 20% of the proceeds remains for communities," said the minister. 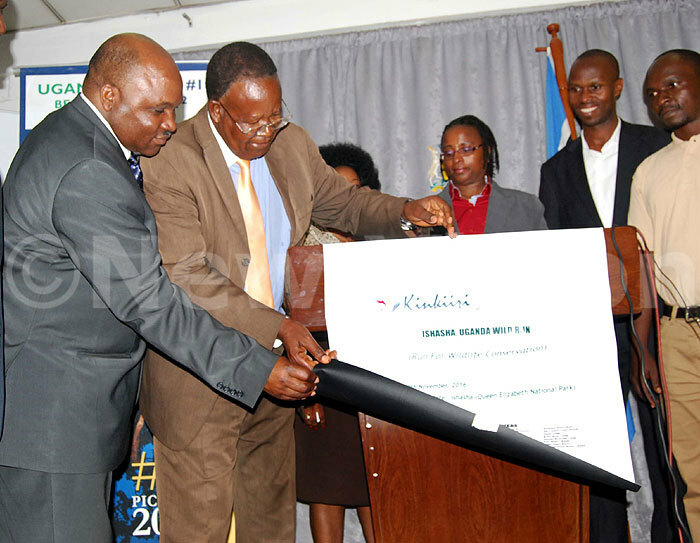 The event will run from November 11 to 12. (Credit: Godiver Asege)

"That is why we want to make sure that all these things are conserved because this sector is a big source of employment and brings in more foreign exchange compared to other sectors," he added

"The industry fetches about $1.5bn. That's why we are considering all options to stop the habit of poaching because we shall end up losing out if these animals are killed. We want to attract more foreign and local tourists."

Seguya said they realized drones can work better to track commercial poachers who kill elephants and rhinos, among others animals.

"The commercial poachers are very dangerous and we think drones can help us stop them. Secondly, parks are many and we cannot monitor all animals but with drones we can easily know what is taking place."

Last year, a record 40,000 kilos of ivory were confiscated worldwide, and with more large seizures of more than half a tonne made in Africa.

Out of these, 80% of the African seizures were made in Kenya, Tanzania and Uganda.

UWA's Nightingale Mirembe said they have reduced gate fees to park to sh10, 000 for Ugandan citizens and $25 for foreigners during the run to allow more people to get a chance to visit Queen Elizabeth and Bwindi for gorilla tracking.

This will be from November 11 to 12. The Speaker of the East African Legislative Assembly, Daniel Fred Kidega, Kamuntu and former tourism minister Maria Mutagamba, among other guests, are expected to take part.

The coordinator of the event, Abdul Muhiire said participants will have a chance to visit Ishasha-Queen Elizabeth National Park and Bwindi impenetrable forests for gorilla tracking.

All participants have to pay sh10, 000 conservation fee. Those intending to go from Kampala can book with Platinum Tours and Travel at Theatre Labonita with 100,000 for transport (to and fro) and sh40,000 to visit the two places.