Victim's relatives upset as murder suspect is released on bail

Mother of the deceased Anne Ssentongo(left). Photos by Michael Odeng

The city businessman who allegedly murdered his wife, Clare Nantumbwe at their home in the city suburbs of Makindye has been released from jail on bail, leaving the victim's relatives angry and scared.

Led by the mother of the deceased, Anne Ssentongo, a nurse in the United Kingdom, she told the New Vision outside court after Andrew Ssalongo Walungama, a motor spare parts dealer was released that he will interfere with investigations.

According to Anne, the deceased's children who are living in fear were supposed to testify against their dad, because they have information surrounding their mother's death.

"When children come from school where will they go? The man has been harassing their mother and the children recorded whatever took place. However, the suspect will interfere with investigations because the children will be scared to testify against him" she lamented.

Nantumbwe was a mother of five, including two pairs of twins but she was staying alone at home since all the children were at school, including her oldest daughter who is a nursing student at Mulago Referral hospital.

Ssentongo said she had on several occasions attempted in vain to end her daughter's marriage after getting information that she had serious misunderstandings with her husband. "By then, I was planning to process my leave and come to Uganda to purposely persuade her to leave this marriage because I continuously got information that her life was under threat," she said. She learnt about the death when the eldest daughter called her on phone.

The suspect was released on a cash bail of sh3m while his three sureties were each bonded at sh50m not cash. The High court presided over by Justice Yasin Nyanzi ruled that the suspects' sureties who include Reverend Herbert Ssalongo Zziwa, Hadji Badru Kakembo, and businessman Eddie Bazongere were substantial. He added that the accused has a fixed place of abode, in which he holds a land title.

"The applicant will report to the register once every month, starting November 16, 2016," Nyanzi ruled.

Earlier this year, Walungama with his night watchman, Geoffrey Kaweesi were arrested and detained at Katwe Police Station in connection with the murder of his wife, Nantumbwe (35). He was later charged with murder contrary to Section 188 and 124 of the Penal Code Act (PCA). 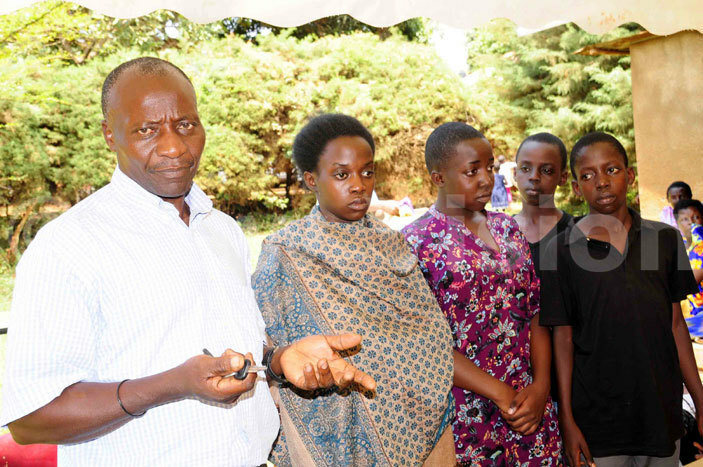 Children of the deceased

According to the Kampala Metropolitan Police Spokesman Emilian Kayima, the deceased's body was on August 20, 2016 found lying in their home in Upper Konge Zone in Lukuli, Makindye division.

Kayima stated that police preliminary investigations indicated that the deceased appeared to have been murdered contrary to earlier claims of suicide.

According to a postmortem report carried out at Mulago, Nantumbwe had died of suffocation, which confirmed their earlier suspicions that she had been murdered.

In his statement, Walungama denied any wrong doing and stated that he returned home and could not access the house because the deceased had locked from inside and that she was not picking her cell phone.

One of the children told relatives that their mother knelt and begged their father for forgiveness for any suspected wrongdoing and 'begged' him to let the family live in peace but that he allegedly quarelled and insulted her in their presence.

Robert Bwete, an uncle to the children disclosed that the couple had been locked in a domestic dispute that had threatened their 23-year old marriage and he had on several occasions tried to reconcile them in vain.