Anyone who has never celebrated a birthday with cake would envy a beast eating a fruit cake. But the patrons who gathered at the wild side of Entebbe did not begrudge Zakayo at his 53rd birthday. 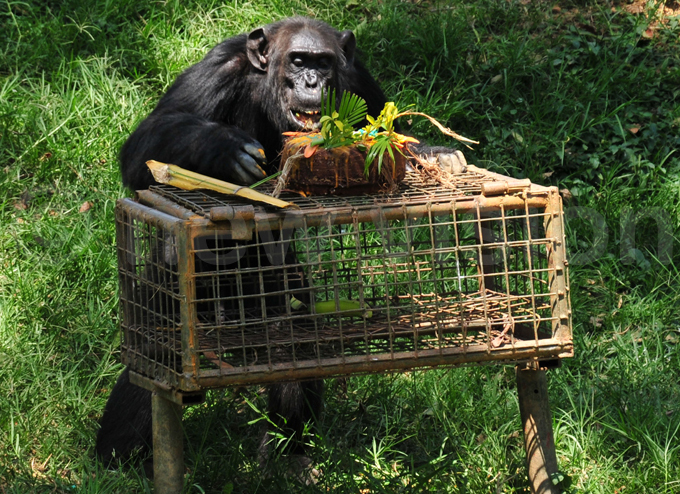 An excited Zakayo ‘cutting’ the cake. Photo by Peter Busomoke

He was kidnapped from his original family, surrendered to Government because he was becoming aggressive to the ‘owners.’ He then lived at a run-down zoo where he was abused by insensitive visitors during the era Idi Amin. Today, he is in the evening of his life but well looked after with regular meals of fruits and health checks. Every year, he is treated to a lavish meal of cake to celebrate and also raise awareness about the plight of chimps.

On Friday, Zakayo swaggered into the greenery at Budongo Island sitting at the Uganda Wildlife Education Center formerly known as Entebbe zoo. The patrons clapped and cheered him as he advanced towards the fruit cake. They sang a birthday song as he landed on the gift prepared to celebrate his special day.

Zakayo who retired as the alpha male five years ago has a soft spot for children. He ate a bit of it and then called the youngsters to have their share. But when the adult chimp stormed the ‘high table’ where the cake had been placed, Zakayo grabbed it and took off into the tree canopies.

“I have never been to this place but the animals especially Zakayo are very interesting,” said Zoe Tushabe, 11 year old student at Entebbe Education Center. “It is a good place to learn about wild animals and their behavior.”

Tushabe recited a poem about wildlife before the birthday boy was released from his holding ground. She was taken through rehearsals yesterday ahead of the meeting during Zakayo’s special day. 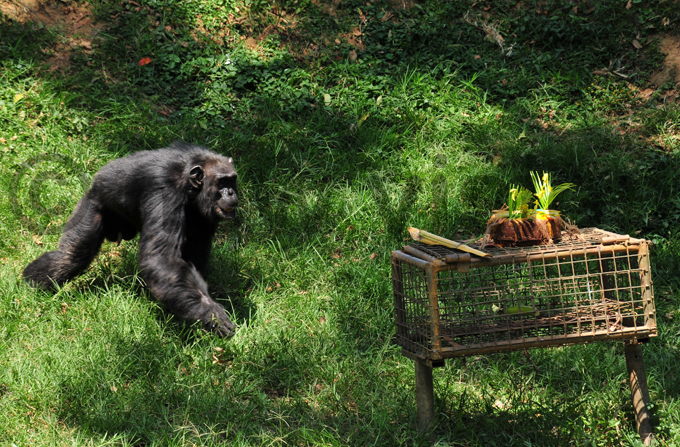 The human participants at Zakayo’s party also had their cake at the Budongo Island Pavilion where James Musinguzi, the executive director at the center and the representative of Entebbe Mayor, Godfrey Kiryowa took charge.

“We keep animals to give them a second chance in a wild setting,” said Musinguzi, adding that they were working with different partners including the Uganda Wildlife Authority and the Chimpanzee wildlife Trust popularly known as Ngamba Island to conserve the orphan chimps.

Zakayo was found abandoned on 10th June, 1964 in Semliki National Park in Bundibugyo. “He was not killed or sold to outside zoos as many species left the country at that time, through pet trade,” said Musinguzi.

A white man, according to Zakayo’s profile, gave him sanctuary until 19thJune, 1976 surrendered him to Government. He was becoming aggressive and difficult to manage, according to a report at UWEC.

But the political turmoil and civil unrest that prevailed in the 1970s and early 1980s ran down the zoo and took a toll on Zakayo as some of the patrons teased with cigarette smoking and drinking of alcohol. “Zakayo is lucky that he did not get lung cancer and still living and hopefully he will stay with us for many years,” said Musinguzi. 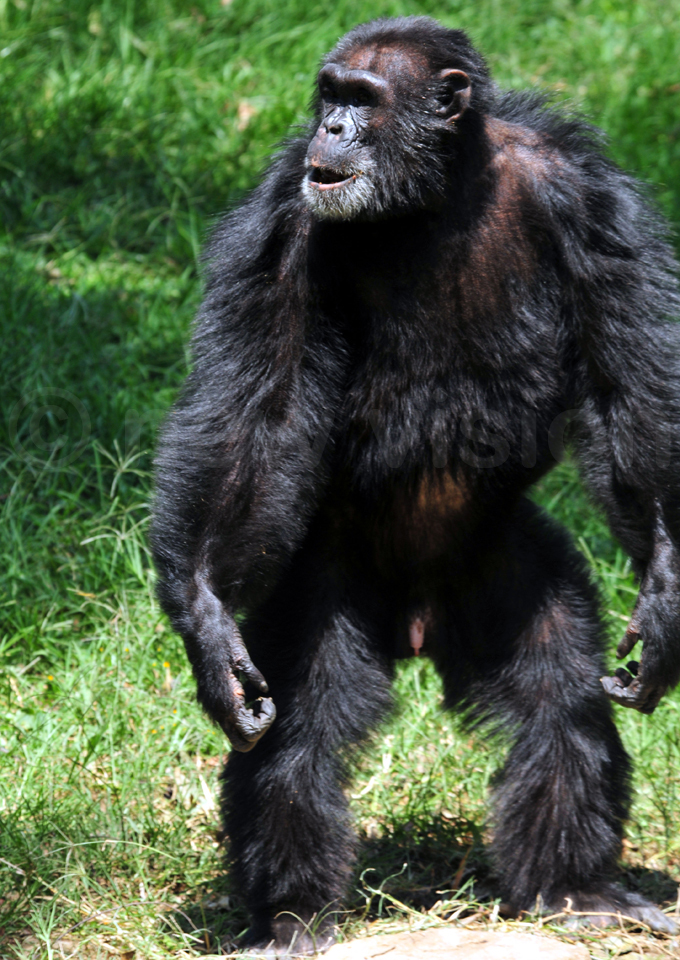 Zakayo was the first king of Budongo currently with 16 chimps before he retired in 2011 and gave the mantle to Matooke who had a short lived reign of about one year. Onapa is the reigning king.

Jimmy Awany, the curator describes Zakayo as caring and easily adopts juveniles, which has made integration of chimps easy. He also still commands respect from the group and keeps peace by reconciling feuding parties. He sired Shaka when he was still the alpha male.

Isaac Mujaasi, the Marketing and Public Relations Officer said the life expectancy of chimps is 40-45 years in the wild and 60 years in capacity. He said the health care and food provided in captivity helps them to survive longer.

The population of chimps in Uganda is estimated at 4,950 and they are regarded as endangered. They are threatened by habitat (forest) destruction and pet trade and their total population is less than 175,000 globally.

BENIN: Why did cranes falter?