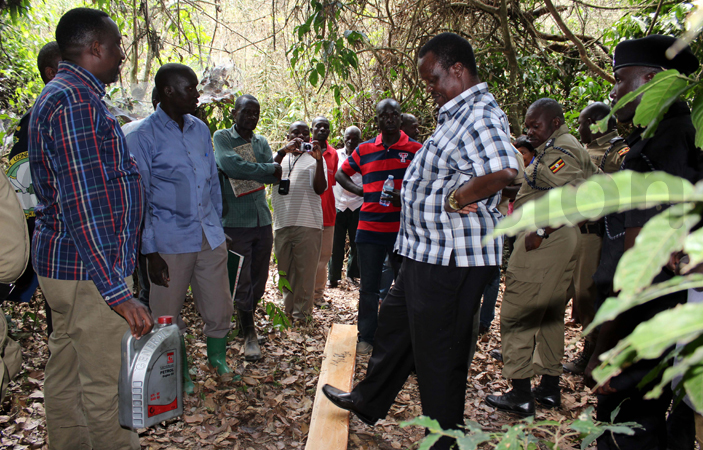 The minister for water and environment, Sam Cheptoris (C) checks out pieces of timber found in Malabigambo Forest. Photo by Jeff Andrew Lule

They reported to the Minister for Water and Environment, Sam Cheptoris during his fact finding mission, at Malabigambo Forest, to establish the status of the forest.

Cheptoris' visit follows a directive from President Yoweri Museveni after reports emerged of illegal lumbering in the forest.

He visited the forest and also impounded fresh timber which had just been cut.

The chairman, Kigazi Tukwatilewamu, Collaborative Forest Management (CFM), Denis Ssebugwawo said for three years, timber has been cut in the presence of Police and NFA personnel but do nothing.

"The cutting is done using chainsaws, which make noise at night but nothing is done," he said.

The trucks, Ssebugwawo said, move on roads during the day and cross to Tanzania without Police doing anything.

He asked NFA to renew their Collaborative Forest Management which expired, for residents to protect the forest.

The district secretary for production and natural resources, Charles Njuba said Malabigambo was a host of African Elephants but all crossed to Tanzania since 2014 when timber cutting started. 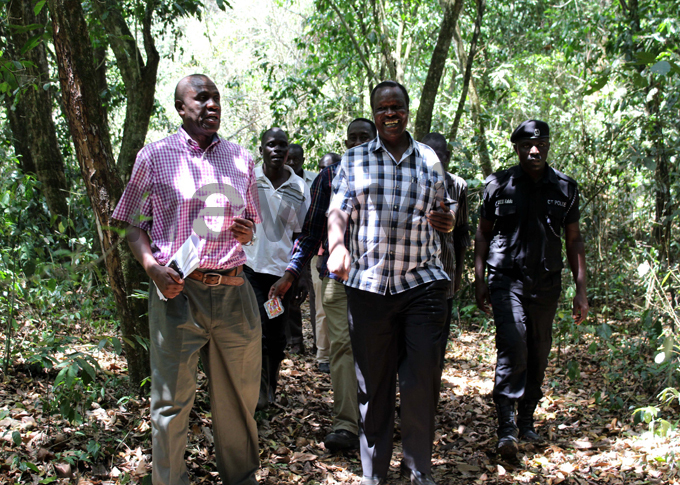 Malabigambo which is 11,173ha is part of the Sango Bay biodiversity wetland forests which are of international importance and a water catchment for Lake Victoria. It also crosses to Minziro Forest in Tanzania. It hosts Measopsis Emini and Podo which have a high demand in Uganda and Tanzania.

Cheptoris ordered for the immediate suspension of the Malabigambo NFA supervisor, Richard Sentulo for failure to do his work.

"I want the report in two weeks to hand it over to the President. It is amusing, we have Police and NFA staff here yet timber is smuggled in broad daylight," he said.

NFA boss, Mugisa promised to renew the area CFM after investigations, adding that NFA has never given out any license to anyone to cut timber from Malabigambo.

"We are going to request for more UPDF and I am going to ask the Police boss Gen. Kale Kayihura for more Environmental Police Force personnel to beef up security," he noted.

Mugisha said they also intend to have their own prosecutors and CIIDs to easily investigate and take the culprits to court to be charged.

The range manager, Reuben Arinaitwe said most of the timber is cut at night and smuggled to Tanzania.