Trump, Clinton zero in on battlegrounds in final sprint

Donald Trump urged Americans Monday to "rise above the noise" of the caustic 2016 race and elect him president, as he insisted he is winning against Hillary Clinton despite polls that show the opposite.

Casting the election as a "once-in-a-lifetime" opportunity to reject the nation's political elite, the provocative Republican billionaire insisted he was the voice of the American everyman and essentially urged voters to ignore his 18-month candidacy of overheated rhetoric.

"You've got to get out and vote," Trump told an enthusiastic crowd in Tampa, Florida, as early voting kicked off in the state barely two weeks before Election Day November 8.

"I'm asking the American people to rise above the noise and the clutter and to embrace the faith and optimism that is... the most crucial ingredient of the American character."

But instead of treading the optimistic high ground, he swiftly returned to rounding on Clinton, decrying the "phony polls" that show him trailing, and questioning the centuries-old integrity of the US election process.

"Our system is rigged," he said, as he berated Clinton for using a private email server and highlighted revelations in Monday's Wall Street Journal that the organization of a Clinton ally paid nearly $500,000 to the political campaign of the wife of an FBI official who later helped oversee the investigation against her.

"She never had a chance of being convicted, even though everybody in this audience... knows that she's 100 percent guilty," he said.

She was seeking to cement her lead by conquering battlegrounds including Florida, North Carolina and Ohio where early voting has already begun, and where the race will be won or lost.

Trump, who faces an increasingly narrow path to victory amid damning revelations about his treatment of women, continued to assure his supporters that the polls were unfairly tilted towards Clinton and that he would prevail.

"We're winning, not only Florida, but we're going to win the whole thing," Trump said in St. Augustine. 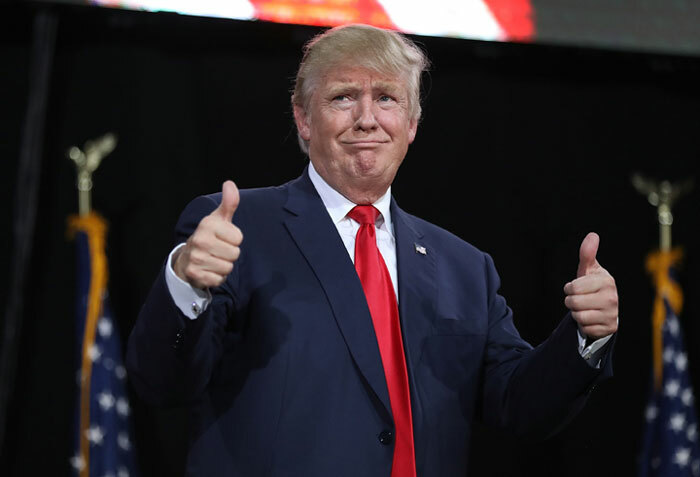 Residents of Chicago, Charlotte, Miami and Las Vegas are already going to polling stations to cast ballots -- with initial indications suggesting a surge in early voting among Democrats.

"We've got to get people turning out. That's the most important thing we can do," Clinton told WZAK radio in Cleveland.

At least seven million Americans have already voted, according to the US Elections Project.

At a Monday fundraiser in La Jolla, California, President Barack Obama acknowledged that he wants an overwhelming victory for Clinton in order to send a message that Americans were rejecting Trump's divisive rhetoric.

"We want to win big," Obama said. "We don't just want to eke it out, particularly when the other guy's already started to gripe about how the game is rigged."

Campaigning in New Hampshire, where her poll lead has grown to about eight points, Clinton assailed her rival for calling the operation to oust Islamic State fighters from the Iraqi city of Mosul "a total disaster."

"He's proving to the world what it means to have an unqualified commander in chief," she said. "It's not only wrong, it's dangerous, and it needs to be repudiated on November 8th."

Most polls put Trump a few points behind in Florida, where he and Clinton both campaign on Tuesday.

Trump's campaign manager Kellyanne Conway appeared to contradict her candidate by admitting Sunday on NBC's "Meet the Press" that "we are behind," but insisting Trump remained viable.

"Saying the race is over before people actually cast their votes I think is a really elitist proposition going on right now," she told MSNBC Monday.

Clinton leads real estate mogul Trump nationally by five points according to the RealClearPolitics poll average, and leads in most battleground states.

A new national ABC News poll showed her on 50 percent to Trump's 38 percent -- her highest score since the race to succeed Obama began.

A CNN poll released Monday has Clinton ahead by five points.

In New Hampshire Clinton used her position of strength to highlight other Democrats on the ballot, including Governor Maggie Hassan, who is running for Senate.

"We've got to break through the gridlock and the dysfunction that has unfortunately marred Washington," Clinton said, looking towards Democrats possibly wresting the Senate from Republican control.

Trump in Florida did touch on policy, including trade and repealing Obama's signature health insurance law.

He also earned cheers for saying that if elected he would "cancel billions and billions of dollars in payments to the United Nations climate change programs," and use the money to fix US "environmental infrastructure."

"Make sure you get out and vote, or this whole thing, you know the movement that they're all talking about all over the world, it won't be the same, folks," Trump said in Tampa. "We're not going to be able to do what we wanted to do."

Dieting 101: A crash course in the basics