The Ugandan goalkeeper had a bitter-sweet experience after he was forced off after 28 minutes with an injury.

The Ugandan goalkeeper had a bitter-sweet experience after he was forced off after 28 minutes with an injury.

Cranes goalkeeper Denis Onyango became the first Ugandan footballer to win the CAF Champions League after his side Mamelodi Sundowns of South Africa won for the first time on Sunday despite a 1-0 second-leg final loss to Zamalek of Egypt in Alexandria.

A Stanley Ohawuchi goal on 64 minutes was not enough for the home team before a 60,000 crowd as they trailed 3-0 from the first leg in Pretoria last weekend.

Onyango started the match but had to be withdrawn after 28 minutes and replaced by Wayne Sandilands after sustaining an injury.

A 2016 Africa-based Footballer of the Year finalist, Onyango needed medical attention three times before being replaced.

It was a remarkable triumph because the South Africans were eliminated in the final qualifying round in April only to be reinstated when their Democratic Republic of Congo opponents were disqualified.

Success for Sundowns made them $1.5 million (1.38 million euros) richer and secured a place at the FIFA Club World Cup in Japan during December. 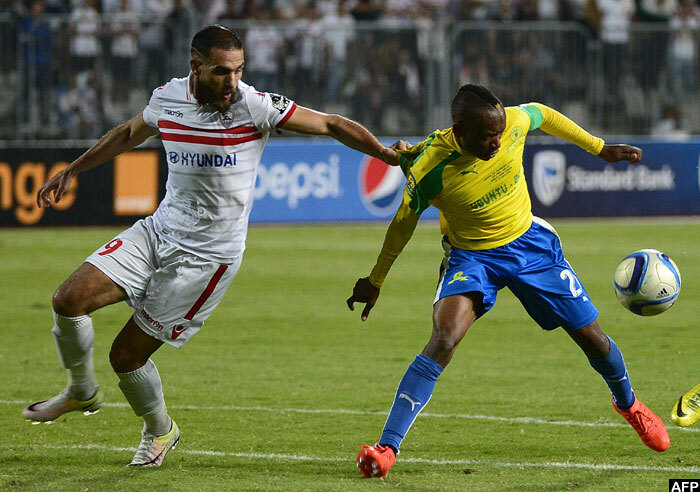 Goalkeeper Ahmed El Shenawy and captain and midfielder "Shikabala" were among those dropped as Zamalek coach Moamen Soliman made four changes from the side that started the first leg.

Although facing a mammoth task, history offered a hope to Zamalek with two of three previous Champions League finalists in a similar predicament emerging as overall winners.

An estimated 60,000 predominantly Zamalek supporters were inside the 86,000-capacity Borg El Arab Stadium on the outskirts of Alexandria as the match kicked off.

There are few more nerve-inducing factors in African football than a large Egyptian crowd roaring on their team, but Sundowns calmly survived early pressure.

The first scoring chance for the hosts came after 12 minutes when Nigerian Ohawuchi burst through and beat Onyango, but the ball trickled wide.

Striker Basem Morsy had been headlined as the Zamalek dangerman, but recent signing Ohawuchi was posing a bigger threat.

A wild but crucial clearance from Soumahoro foiled another attempt by the Nigerian to break the deadlock before Sundowns began to threaten going forward.

The first serious chance for the South Africans came on 35 minutes when awarded a free-kick just outside the box, but captain Hlompho Kekana struck the ball into the wall.

Zamalek goalkeeper Mahmoud Abdel Rahim did well to push away a goal-bound shot from Percy Tau and a looping Khama Billiat shot struck the top of the crossbar before flying wide.

The injuries to Onyango meant eight minutes of first-half stoppage time during which Liberian Anthony Laffor troubled Zamalek twice with a shot and a header.

Half-time arrived with the second leg goalless and Sundowns retaining the three-goal advantage they established in Pretoria last weekend.

Zamalek started the second half as they did the first, controlling possession and territory but rarely looking like cracking open Sundowns' defence.

After 64 minutes the Egyptian outfit scored and it was no surprise that the goal came from livewire Ohawuchi.

Receiving possession well outside the box, he beat one man and unleashed a low, long-range drive that flew into the corner of the net off the left hand of Sandilands.

Book of shame out