A war against tsetse flies in Kalangala

Tsetse flies have been in Ssese islands for ages and in the 1920s, the colonial government was forced to evacuate people from the islands.

Tsetse flies have been in Ssese islands for ages and in the 1920s, the colonial government was forced to evacuate people from the islands.

It was early evening as the operator of the big boat (known locally as Kinaala) that was to ferry us to Serinya Island helped each one of us onto the wobbly vessel.

For the plus-size that I am, all I can say is my being helped onto the boat was a bit of an awkward episode. It offered dramatic viewing for the people around, and the same can be said of the time we had to literally jump off the boat once we had reached Serinya Island - part of the Ssese archipelago.

A large part of the travelling group consisted of officials from the agriculture and energy ministries, and for most, it was their first time moving on water in a local boat. 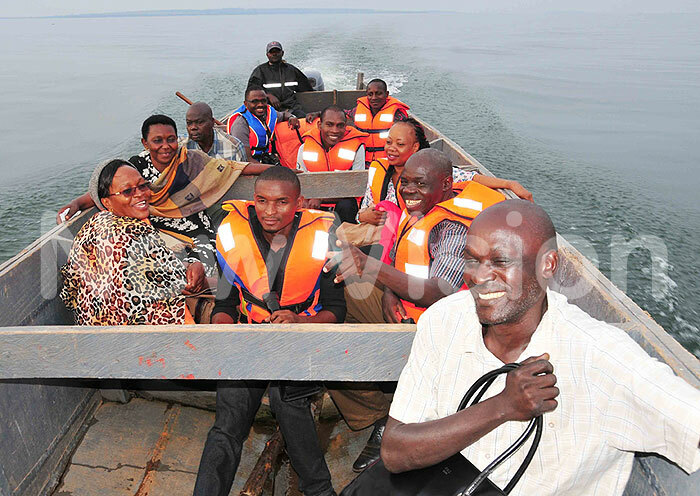 The team was on a mission to assess the extent of tsetse fly infestation on this and other islands.

Team leader Frederick Luyimbazi, who is the commissioner for entomology at the agriculture ministry, said the two ministries joined hands to embark on a pilot programme of fighting tsetse flies  on the five islands of Serinya, Banda, Buwuvu, Kibibi and Lulamba.

Tsetse fly infestation is threatening half of the national herd and reports from the ministry of agriculture indicate that about 70% of Uganda's land surface is infested by the vector responsible for Nagana in animals and Sleeping sickness in humans.

According to Luyimbazi, that statistic has a negative impact on the war against poverty considering that the agriculture sector contributes to 21% of Uganda's gross domestic product (GDP) while the livestock sub-sector accounts for about 8% of the agriculture GDP, according to a 2008 Uganda Bureau of Statistics report. 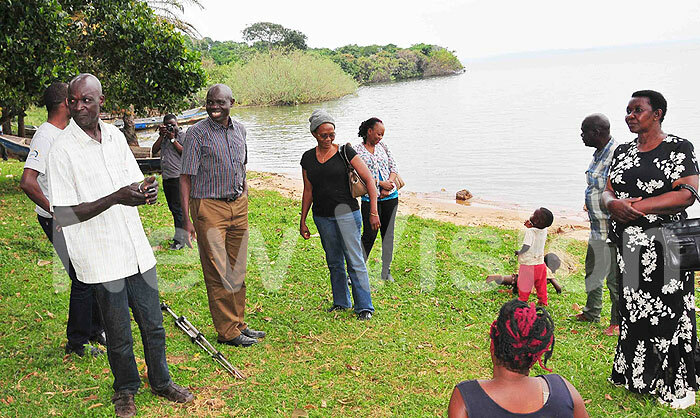 We thought we had had it rough but Betty Mukasa, the Kalangala district entomologist, has seen worse days on the water as she goes about her work in many of these islands.

"There are times when the lake becomes rough when we are in the field far away on such islands like Serinya and getting back home turns out to be a nightmare."

Her Mukono district counterpart Annette Nassozi relates to this herself. Recently she was part of a group sent by the agriculture ministry to collect data concerning the infestation of tsetse flies around Ssese islands.

A couple of minutes after they had started moving back to mainland Kalangala from Lulamba Island, their engine failed and the boat stalled in the middle of the lake (Victoria). "As the man operating it bent over to repair it, I wondered what would happen if he accidentally slipped into the water and left us alone in the boat."

Panicked, she had to think outside the boat.

"In my desperation I contacted someone we had left on the mainland and asked him whether he could come quickly to our aid. But he confessed that he did not know how a boat was operated and my heart instantly sank."

Luckily, a few minutes later, the operator managed to fire the engine back to life.

Mukasa, the Kalangala district entomologist, said hiring a boat requiring about 40 litres of petrol for a day plus about sh70,000 for motor-cycle transportation on the islands for their work is too expensive.

She revealed that a boat plus an engine promised to them by the government in 2010 to help them in setting tsetse fly traps and for other related work has never been received.

STATE OF TSETSE FLIES ON THE ISLANDS

After their trip to Serinya Island, the team from the agriculture and energy ministries was joined by officials from Kalangala district for a sensitization meeting. Farmers from different islands also took part in the meeting which took place at Lutoboka landing site on mainland Kalangala.

Only a lucky few left the meeting without being bitten by tsetse flies. 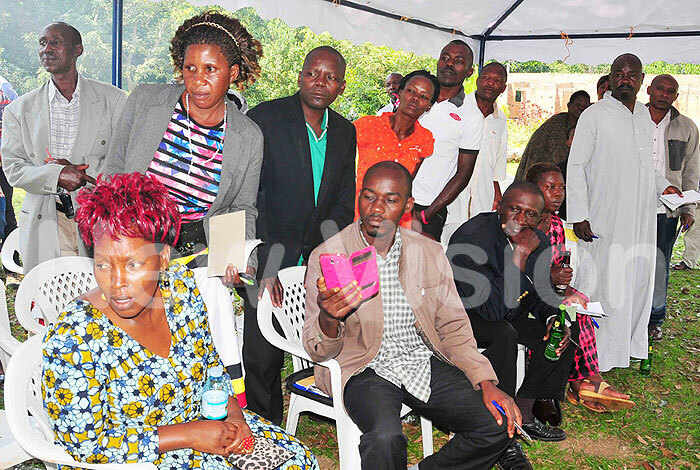 A cross-section of people from different islands who attended the sensitization meeting. (Credit: Gladys Kalibbala)

The district's veterinary officer Dr. Edward Muwanga said about 90.2% of all the islands around Kalangala are infested by tsetse flies, which affects animal husbandry in the area.

Meanwhile, entomologist Mukasa said that while collecting data in October 2013 on Mbugwe Island in Bufumira sub-county, 590 tsetse flies were found in the traps that had been set.

In 2008, Kalangala registered an increase in cases of Sleeping sickness, but which has currently reduced, said Dr. Muwanga. "We suspected this to be a result of the over 90% employees working at BIDCO who had come from Busoga."

About 2% of animal deaths in Bufumira sub-county in recent months were due to Nagana, he added. 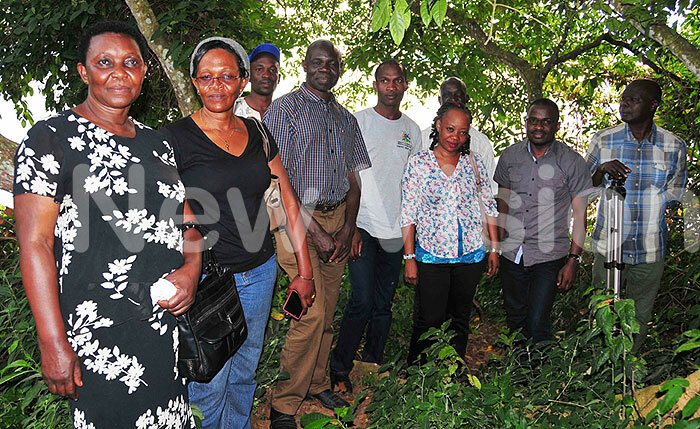 The team posed for a group photo in a forest at Serinya Island. (Credit: Gladys Kalibbala)

Catherine Nanyanzi, a councilor on Serinya Island, said she had seen tsetse traps in the area for some time but did not know much about them or what they are for. "Whenever they fall down I refuse my children to get near them because I don't know what potential dangers they pose," she told the visiting group.

Dr Muwanga showed concern that those who understand how these traps help in catching flies misuse their knowledge and they too need sensitization. "They shift tsetse traps from where they have been set and take them near their homes while some people sleep under them."

In a bid to rid Kalangala of tsetse flies, the team brought along equipment to launch a project that they hope will help curb tsetse fly infestation. 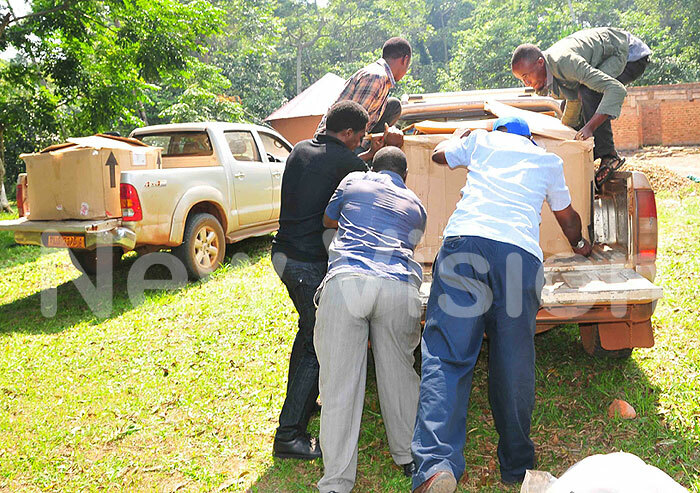 Luyimbazi said the equipment, all handed over to the LC5 chairman Willy Lugolobi, will be used in a pilot project to fight the flies in the five selected islands.  He cautioned residents of the chosen islands against abusing the tsetse fly traps.

And the equipment don't come cheap either. Each trap, according to Luyimbazi, costs sh35,000 while the drugs that they are soaked in cost sh400,000 per litre. 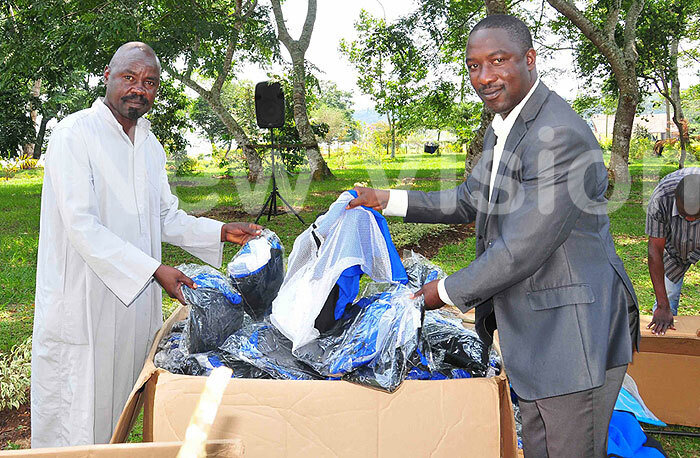 METHODS TO BE USED

Luyimbazi explained that the agriculture ministry had earlier sent entomologists to the five islands - Serinya, Banda, Buwuvu, Kibibi and Lulamba - to collect data which is essential in helping them identify ways of suppressing the flies.

"For this project funded by IAEA, we are going to use tsetse traps, flat traps and hot fogging machines to help in the suppression process," he said.

The agriculture ministry has an insectary, a mass rearing plant in Tororo where the ministry of energy has assisted them with nuclear to sterilize male tsetse flies. "By the time we set them back into the wilderness in Kalangala, they will not be able to multiply as their sperms will have been made infertile," said Luyimbazi. 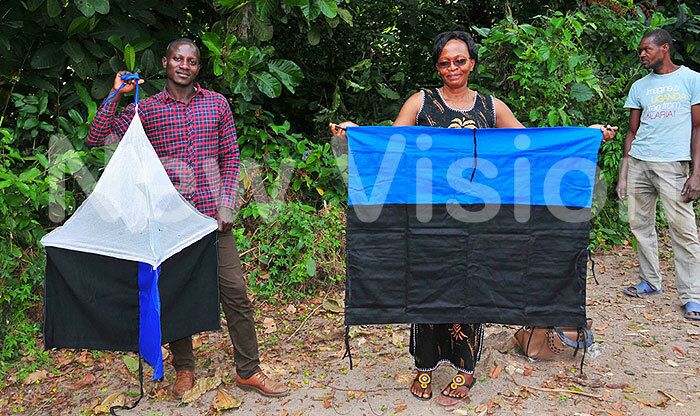 In 2012, with support from the energy ministry (IAEA), the ministry of agriculture refurbished an insect breeding centre worth sh680m at the National Livestock Research Institute (NALIRRI) in Tororo district.

"In order to fight the tsetse flies, we intend to use an integration of technologies involving tsetse traps, application of insecticide on livestock (pour-on or spraying), aerial spraying and later the use of the sterile insect technique [releasing sterile insects into the wild]," explained Luyimbazi.

The mass rearing centre in Tororo targets a capacity of 500,000 breeding female flies from which about 50,000 males will be expected every week.

"These will be released into areas where we would not have achieved eradication by using conventional techniques."

The plan is to release 100 sterilized male flies per square kilometer for over 52 weeks.

When the sterilized males finally mate with the females found in the wild, they will not produce viable offspring. Fertilisation of the eggs will not take place and the eggs will be aborted. Eventually the tsetse foci being dealt with will crash.

"The implementation of the sterile insect technique involves the establishment and maintenance of a tsetse fly colony from which the males will be sterilized using an Irradiator ‘Gamma Source' and later released into the wilderness after conducting an effective tsetse suppression program using tsetse traps and aerial spraying," said Luyimbazi.

Tsetse flies have been in Ssese islands for ages and in the 1920s, the colonial government was forced to evacuate people from the islands. While some people were taken to Masaka, others were ferried to Entebbe to allow aerial spraying to take place. Mass graves believed to be around Kibanga Primary School in Kalangala are said to belong to the over 60% people who died of Sleeping sickness during that time. 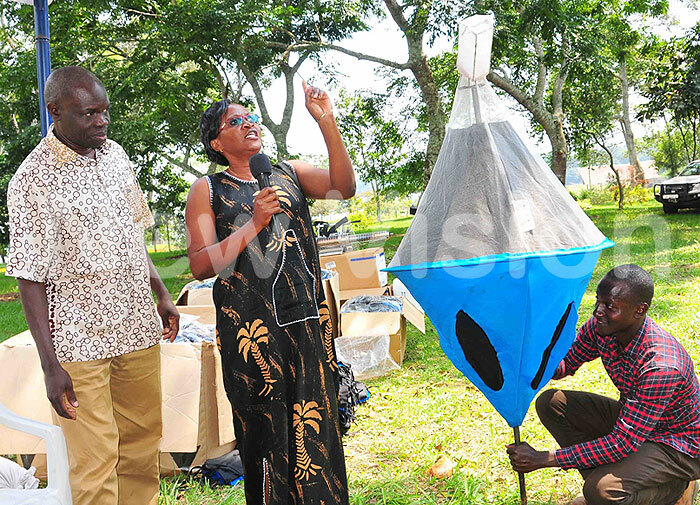 Here, Frederick Luyimbazi looks on as Annette Nassozi, an entomologist from Mukono, explains how tsetse fly traps are set during the handing over of the equipment. (Credit: Gladys Kalibbala)

Dr. Muwanga (veterinary officer) said that out of the 60,000 tsetse traps required to be set around Ssese islands in a year, only between 200 and 300 have so far been set.

"Because of poor animal health due to diseases, there is very little milk produced where farmers can only get about two to five litres a day. They cannot keep improved animals as these cannot stand the state of tsetse flies."

Poor meat quality and animal reduction are some of the other factors that Muwanga blamed on tsetse flies.

"Our budget as a district is so small while drugs to fight these flies are very expensive. Government should help us by providing more funding to clear the flies so that the animal industry is boosted." His other concern is that the flies will threaten the booming tourism industry.

Meanwhile, LC5 chairman Willy Lugolobi urged the concerned ministry and the National Drug Authority to monitor drugs which are on the market to help farmers identify what to buy.

"Formerly, drugs were controlled by the veterinary department but after privatization, our farmers have been cheated. They lose a lot of money from fake drugs which has forced some of them to drop out of the farming business." Team leader Luyimbazi checks out some fish on Serinya island during the tour. (Credit: Gladys Kalibbala)

"As we put pressure on government to put in more effort to clear tsetse flies after the assistance rendered by IAEA, concerned districts should also put a tsetse component in their budgets. It's a shame that in Uganda where IAEA started its services in 1967, the country is still struggling to wipe out these flies while in Zanzibar where they introduced assistance in the 1990s, the flies were wiped out. Let's make it a joint effort to fight the flies so that the tourism and animal industry can flourish."

"Sustainability is urgently required if we are to achieve any goal. Whenever a project to fight the flies comes up, they reduce dramatically only to re-emerge at the expiry of the project. The district has limited funds while drugs for this venture are extremely expensive plus transport in the islands. Government should buy a boat for us to help in monitoring situations in the islands as we use a lot of money to hire boats whenever we have a journey."

"What plans does government have for us at these islands? I have 15 indigenous cows but would like to upgrade to zero grazing with cows that can give me enough milk for business purposes. The veterinary officer warns us that such animals cannot live long in our environment full of tsetse flies as they will die!"