Breathing life into a campaign that desperately needed some, with a real gift for inspiring everyday Americans, the Achilles heel of the woman she is defending: Michelle Obama has proven to be Hillary Clinton's trump card.

Since her arrival at the White House nearly eight years ago, the first lady has maintained her sky-high approval rating. She has in the past stumped for her husband and a number of Democratic candidates.

But in an ugly campaign full of personal attacks and low blows, Obama -- who will again make the case for Hillary Clinton on Thursday in Arizona -- has stood out, perhaps more than ever, as a potent campaign weapon.

A fierce look in her eyes, her voice sometimes quivering with emotion, Obama offered a biting takedown of the "frightening" attitude towards women displayed by Clinton's Republican challenger Donald Trump.

"It has shaken me to my core in a way that I couldn't have predicted," Obama said.

"This is not normal. This is not politics as usual. This is disgraceful. It is intolerable," she added, noting that "the shameful comments about our bodies, the disrespect of our ambitions and intellect" had rattled her.

Conservative commentator Glenn Beck, who is anti-Trump but not exactly known for any fondness for the Obamas, called her address "the most effective political speech I have heard since Ronald Reagan."

Team Clinton wisely learned from the impact Obama had, immediately using snippets of the speech to fire up Democratic voters, who have sometimes questioned their own candidate. 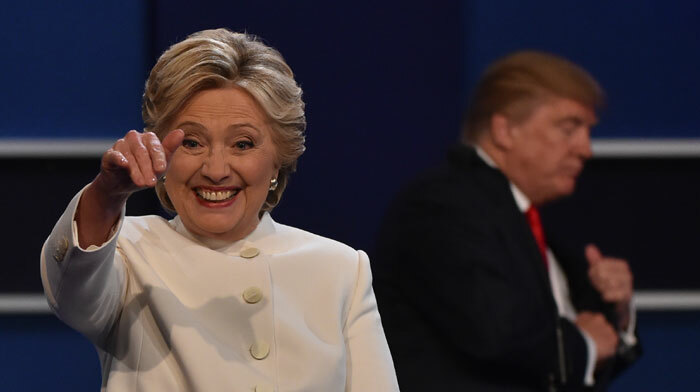 Democratic presidential nominee Hillary Clinton waves from the stage following the third and final US presidential debate with Republican nominee Donald Trump (background) at the Thomas & Mack Center on the campus of the University of Las Vegas in Las Vegas, Nevada on Wednesday. (AFP)

For Jennifer Lawless, a professor of politics at American University in Washington, it is easier for someone not in the race to express "raw emotion."

"Everything a candidate says is dissected and interpreted as strategic. So it might seem less 'real'," she told AFP.

Lawless also pointed out that given that the Obama marriage has never been called into question like the "rocky" union of Bill and Hillary Clinton, Michelle was on more solid ground criticizing Trump.

"Michelle can speak to these issues without worrying that her husband's conduct will be analyzed or she'll be considered a hypocrite," the professor said.

Obama's feisty campaign speech is even more important given that, since her arrival at 1600 Pennsylvania Avenue, she has rarely thrown herself wholeheartedly into political battle.

"It's easier to dismiss the president's call for Donald Trump to stop whining about losing the election, which is largely political talk, than it is to dismiss the first lady's call for Trump to comport himself like a man who respects women," said Thomas Schaller, a political science professor at the University of Maryland.

He added that such a call "transcends the hurly-burly of campaign politics."

The first lady's high-profile campaign appearance has revived speculation about the possible political ambitions of the lawyer with degrees from Princeton and Harvard.

But while she has learned the tricks of the trade and shown some flair for it -- straight talk, peppered with bits of humor -- Obama has never hidden her aversion for politics.

She has repeated, many times, that she will not follow in the footsteps of the 68-year-old Clinton, who finished up her two terms as first lady 16 years ago.

So for now, and until November 8 when voters go to the polls, Americans can relish the searing speech of October 13, which quickly went viral and earned her praise at home and abroad.

At a state dinner on Tuesday honoring Italy, to which she wore a sultry rose-gold Versace gown that demonstrated how she has become a style icon, Italian Prime Minister Matteo Renzi hailed her strong words about women.

"Michelle, after last week, let me be frank -- your speeches are better than your tomatoes," he said, in a joking reference to her White House vegetable garden.

"Thank you so much -- as prime minister, but also as father of a small daughter."

A meeting of very different First Ladies, present and future