Micho in Gabon for AFCON draws
Next Story

When Micho Sredejovic walks into the ASMG Tent in Stade de L'Amitie for the 2017 Africa Nations Cup draw, it will finally dawn on him that Uganda Cranes' journey to Africa's most prestigious tournament was actually a reality rather than a dream.

And while Ugandans will be anxious during the draw that takes place in Libreville, Micho will equally be concerned about Cranes opponents.

Last month, the Serb summed up his side's fate when he stated: "We are waiting for hell of an AFCON draw."

Micho's fears were that Cranes, who are in Pot 4, are likely to draw a tough group as they are likely to have either defending champions Ivory Coast, or giants such as Ghana, Algeria, Tunisia, Mali, Cameroon and Senegal.

Host Gabon, Ivory Coast, Ghana and Algeria are top seeds for the draw after the Confederation of African Football (CAF) took into account the performance of all the qualified teams during the last three Nations Cup and World Cup qualifiers and tournaments.

While seeding the teams, it was decided that AFCON winners are accorded eight points, six for runners-up, four for semi-finalists; three for quarter-finalists, two and one for the third and fourth placed teams in the group stages. 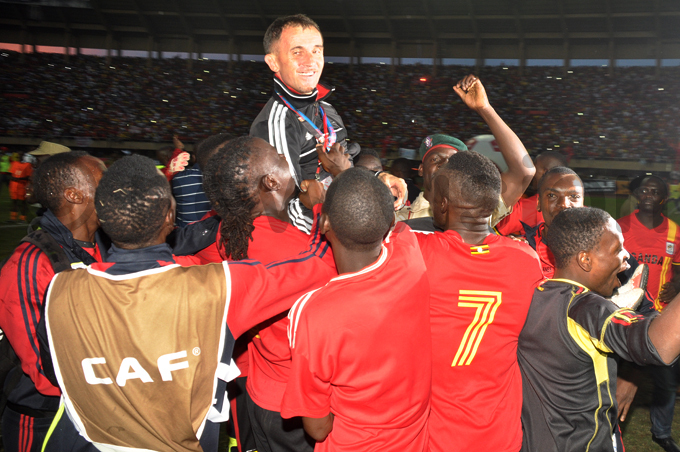 More significance was also given to participation in recent championships.

AFCON 2015 was multiplied by a co-efficient of 3, 2013 by 2 and 1 for 2012. Various co-efficient and point systems were also used for the respective AFCON qualifiers, 2014 World Cup, and its qualifying phase before determining all four pots.

The beauty is, with the exception of Ivory Coast who Cranes are yet to play, Uganda has not fared that bad against a majority of the so-called African giants in recent years.

The Nations Cup will be held from January 14 to February 5, 2017 in the Gabonese cities of Libreville, Franceville, Oyem-Bitam and Port-Gentil.

The activities surrounding the draw however started yesterday when CAF oversaw the draw for the tournament's hotels.

By press time, training grounds were also being selected before a workshop involving all the 16 teams that qualified for the tournament was supposed to be held later in the day.

Micho and Commissioner for Sports Omara Apitta will represent Uganda at the draw.

On Thursday, Micho and Apitta will have a familiarization tour of the four cities that are hosting the tournament including the stadiums, hotels and training grounds that will be used by the teams.