Museveni doesn't give up —Kamya
Next Story

In a declaration that was co-signed by over 100 youth, the young people expressed their appreciation of the day

In a declaration that was co-signed by over 100 youth, the young people expressed their appreciation of the day

At the just concluded second Pan African Agribusiness Conference that was held at the Accra International Conference Center in Ghana from the 4th to the 6th of October, the debate on youth inclusion was given priority.

The African Agribusiness Incubators Network (AAIN), launched the second day of the conference as the inaugural African Youth in Agribusiness Day with Rhoda Peace Tumusiime, the African Union Commissioner for Agriculture and Rural Economy.

On the day, hundreds of youth from across Africa were given the platform to exhibit their innovations, lead the discussions on the issues that affect them and also interact with potential investors.

Dr Alex Ariho, the AAIN CEO says that this day was long overdue and is Africa's new opportunity to grow.

"This was the missing link in making agribusiness more attractive for the youth. They need a platform to share their own experiences and come up with solutions," he says.

In a declaration that was co-signed by over 100 youth, the young people expressed their appreciation of the day and called on sector organisations and governments to rally behind them in making each annual celebration a success for them.

The youth also appealed to African governments to offer more support towards agribusiness incubation, a means by which they are helped to turn their ideas into real businesses.

The declaration was read by a team of youth led by Ghanaian Emmanuel Ansah-Amprofi and some from Guzakuza, a vibrant youth group in Ghana that promotes youth innovations, business growth and linkage to incubation services.

One day for millions of youth

Her Excellency Rhoda Peace Tumusiime the AU Commissioner for Agriculture and Rural Economy welcomed the idea of a day for youth in agribusiness as an exceptional platform for young Africans today.

"The youth need to be integrated, mentored and facilitated to create jobs through agribusiness. We will therefore continue to support AAIN in pushing the agenda for agribusiness incubation which we believe is part of the solution," she said at the official launch. 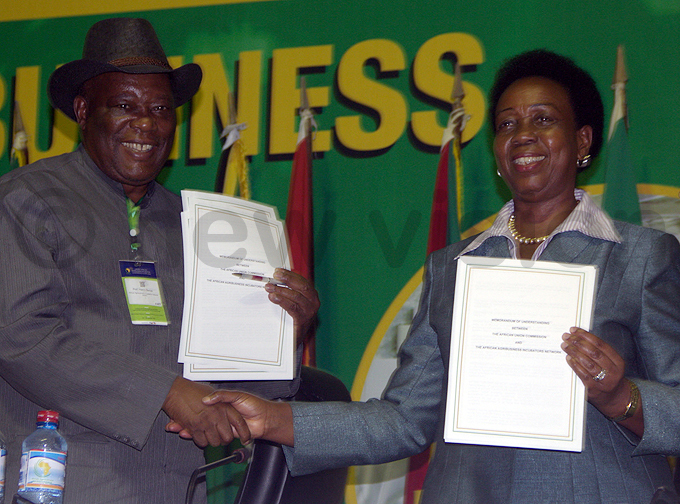 Prof Henry Bwisa the AAIN board chairperson with Tumusiime after the signing. Photo by Solomon Kalema

HE Tumusiime's attendance was also highlighted by the launch of three youth groups including Farmers Apprentice, Ignite Women and AgriHack which is in partnership with the Technical Centre for Agricultural and Rural Cooperation (CTA) an organisation that seeks to empower agricultural and rural communities in Africa, the Caribbean and the Pacific with knowledge and skills for fighting hunger and increase prosperity.

According to Prof Henry Bwisa, the Chairperson of the AAIN Board, the African youth in Agribusiness day that will be celebrated on the 5th of October every year, will bring together youth from both francophone and Anglophone countries to interact and share ideas.

"We have many youth who can be impactful as entrepreneurs through incubation. However even before the day, we will be welcoming youth to over 120 incubators established for training. We also have a network of over 510 mentors in Africa to attend to the youth," Bwisa says.

On the day, HE Tumusiime also signed a Memorandum of Understanding with AAIN on behalf of the Commissioner of the African Union Commission to further support agribusiness incubation as a means of addressing youth unemployment and creating wealth for them.

She signed the MoU on behalf of HE Dr Nkosazana Dlamini Zuma the Chairperson of the African Union Commission.

"We are confident that agriculture can and should absorb 30% of the unemployed youth. The Commission will continue to support AAIN in rolling out the agenda for agribusiness incubation in Africa," she said.

According to AAIN's Dr Alex Ariho the prospects for the day in 2017 are an addition to the agenda for the network's 158 affiliate African Universities and eight Global Universities, 24 University Private Sector Forums on agri-business and research organisations.

"We have devoted partners who would like to see a change for the young generation. We are now working with them towards 2017. We also be having many more youth groups with us in Senegal," he says.

For Africa, this day becomes the first continental day dedicated to youth participation in agribusiness.

Court to hear case of deported MTN boss on April 11