Defending champion Flavia Namakula has 45 challengers to contend with in the main event, as the Castle Lite Ladies Open tees off at Kitante today.

But she is not deterred by the strong field of entries and is ready to play to her best to claim her fifth open title at her home club.

"I'm prepared, and all I can say is; I'm ready to play and I'm not scared of anyone. I will play the course; try to keep the ball in play and see what happens," Namakula said after her practice round yesterday.

Namakula is fresh from South Korea where she had gone to pursue a pro career which didn't materialise at the time but will make another try next March.

Unlike in in 2014 where she beat her closest challenger, Tanzanian Angel Eaton by 12 strokes, it was a bit tight for the four-time winner, who edged out Eva Magala by four strokes.

But it is the same familiar competition that she faces even this year, with six Kenyan entries that include; Joyce Wanjiru, Joseph Naomi, Betty Njeri Gacheru, Wayua Mululu, Stokes Susan, and Aisha Halaka the biggest from foreign soil.

Regular contenders Zimbabwe's Loyce Chingona and Tanzania's Idd Madina alongside Rwanda's Jenny Linda are also in the running for the championship. 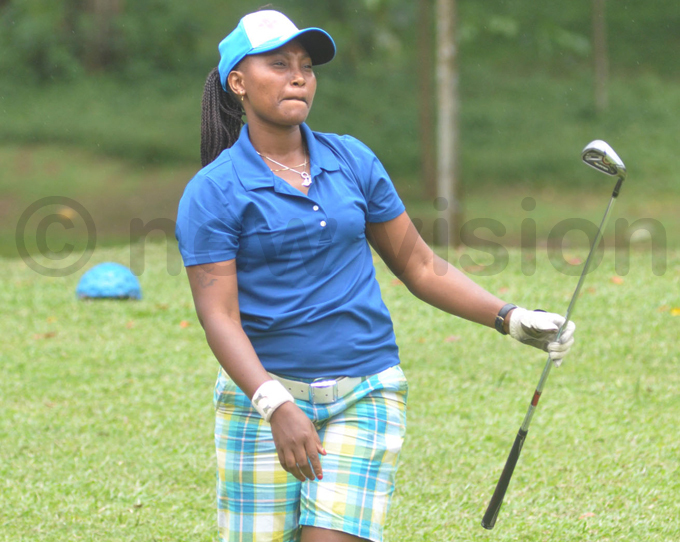 Tanzania's Idd Madina is one of the top contenders. Photo by Michael Nsubuga

Apart from the foreign entries, going by recently concluded local tournaments Eva Magala, Gloria Mbaguta and Irene Nakalembe pose the biggest threat to the champion. In the past one month the three have been ahead of Namakula in various tournaments in Entebbe and Kampala.

Namakula tees off the tournament in a two-ball with Minister of Works Monica Ntege at 8.30 am before Irene Nakalembe and Loyce Chingona follow suit. Ntege officially teed off the tournament yesterday alongside sponsors' representatives.