Use sports, music to shake off exam stress
Next Story

For Kenya's child brides, school offers a break from tradition

"I was living in the bush taking care of the livestock and then when I turned 13 I was married."

"I was living in the bush taking care of the livestock and then when I turned 13 I was married."

PIC: Halima, who was was married at the age of 13 to a man 12 years her senior, sits with fellow pupils during lessons at a school in Wajir. (AFP)

Halima's future at 13 was foretold: a pastoralist's daughter, she was married to a man 12 years her senior. Next would surely come the first of many pregnancies, and a life of domestic hardship.

Such a destiny is common for girls in Kenya's tough, arid north-east -- but Halima dodged this fate.

Instead, she can be seen at the village school, where she stands out, a head taller than her mostly younger classmates, her slender face framed by a bright red hijab, overlooking the crowded classroom.

"I had never been to school," Halima, now 16, said with a shy smile. That changed in July last year when, with the support of charity Save the Children, she won a place at a local school -- and the eventual acceptance of her husband.

"I was living in the bush taking care of the livestock and then when I turned 13 I was married," she said.

Nothing in Halima's life suggested she might ever attend the local school, one of the few concrete buildings in this small, isolated village in Wajir, where the sandy ochre soil is scattered with stunted thorn trees, twisted anthills and igloo-shaped homes made of sticks and grass.

This semi-desert, predominately Muslim and ethnic Somali region has suffered generations of marginalisation by the government in Nairobi, leaving it undeveloped, insecure and burdened by the weight of Islamic and pastoralist traditions that discriminate against women.

More than four in 10 women here are married before the legal age of 18 -- twice the national average -- and 98 percent of women undergo circumcision, or female genital mutilation (FGM). Four-fifths of women are illiterate, a figure nearly seven times higher than elsewhere in Kenya.

In this environment, Halima's experience, and her dream for the future, is rare. "When I'm older I want to become a teacher, in order to educate my whole community," she said.

The drive to get girls into school began in June 2015 and has reached 80 of the estimated 3,000 villages in this region bordering Somalia. Girls are taught the benefits of marrying later, the dangers of early pregnancy and the basics of saving money to allow for a greater degree of independence. 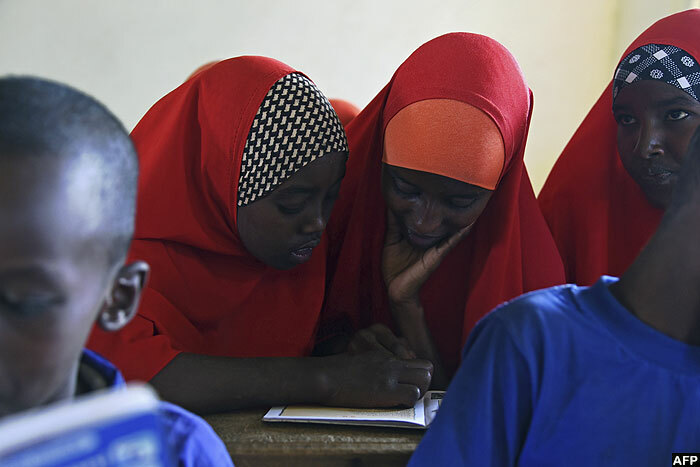 Halima (centre-right) studies with fellow pupils during lessons at school

"Wajir is one of the places that is regarded as hard to reach, based on the security situation, therefore it is very difficult to reach some of the children, especially along the border," said Save the Children's Evans Kibet, who said the area is plagued by Islamist militancy and armed rivalries among pastoralist clans.

To achieve its aim, religious leaders have been co-opted into the girls' education programme.

"I prefer our ladies go to school, and decide for themselves who to marry and when they want to marry," said Abdiwahab Mursal, a local imam and government-appointed Kadhi in charge of the traditional Muslim family court in Wajir.

"At first it was hard for me to accept the idea that she should go to school, simply because we were nomads, always moving from one place to another," said Adan, Halima's 78-year-old father who is now too old to care for the family's herd of camels.

A wizened old man with a bright orange, henna-dyed beard and nine children, Adan said he married off his daughter when she turned 13, "because that is what we do, according to religion and our culture".

He said he has since changed his thinking and, with a daughter who is able to read and write, hopes she might one day get a job and earn money for the whole family.

"Halima's education will bring added value to her life and to all our lives," he said. "One day we might even build a house."

Halima's husband Hussein admitted that at first he feared that attending school might prevent his wife from performing her domestic duties, but in the end he was won over by the $30 (27 euros) paid per-term to the families of girls who join the programme.

"Let her learn things in school, and then we can have children," he said.

At the school, Halima has made an impression on her unmarried counterparts. "I think Halima is a brave girl," said Yousra, a classmate who is a year younger than Halima.

"She's a role model for the girls, they are very proud of her and that motivates them to learn."