How to cure a hiccup
Next Story

Families with destroyed homes and shattered livelihoods wait and pray for help.

Families with destroyed homes and shattered livelihoods wait and pray for help.

PIC: People repair the roof of their home damaged from Hurricane Matthew in Groteaux southwest of Port-au-Prince. (AFP)

New tin roofs gleaming in the Caribbean sun and the sudden appearance of UN and US charity teams driving along now-cleared roads showed that southern Haiti was on Tuesday finally getting some of the aid it desperately needs.

But a week after Hurricane Matthew tore through the country, many remote areas communities were still left to their own devices.

Families with destroyed homes and shattered livelihoods waited and prayed for help. Food and clean water were scarce to nonexistent.

"We haven't seen anybody at all," said Jean Nelson, a 68-year-old resident of Groteaux, half an hour from the major city of Les Cayes where many aid groups and relief stores were located.

For the past week coconuts from the stripped and fallen trees had been sustaining villagers, many too poor to afford sacks of rice that have doubled in price since the disaster. 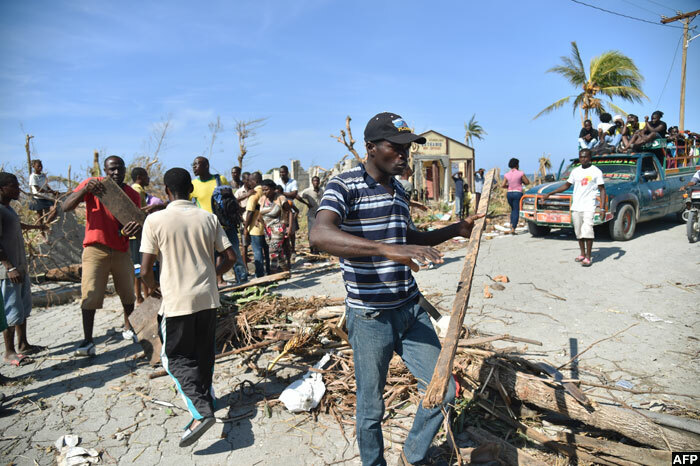 On Tuesday, residents blocked this road to protest, because they had not yet received help after Hurricane Matthew devasted the area, in the commune of Cotaux, in Les Cayes

But in Les Cayes and on the main road leading west from it, new roofs shined bright silver on most homes, a stark difference to previous days in which they had been open to the sky.

The price for the tin needed had risen 50 percent -- from $3 a sheet to $4.60 -- but many found the money to protect their families from the scorching sun, tropical showers and mosquitoes.

The cellphone network which had been cut by the storm was now also mostly up and running.

But farther along, devastation on an apocalyptic scale was only starting to be addressed in the beach villages, where tourists once enjoyed the white-pebble beaches and light-green sea.

A UN peacekeeping team of Brazilian soldiers was at work Tuesday with mechanical diggers to clear the road.

The landscape was one of cracked and broken trees and houses ripped open by the worst of the storm, which packed winds of 230 kilometers (140 miles) per hour. 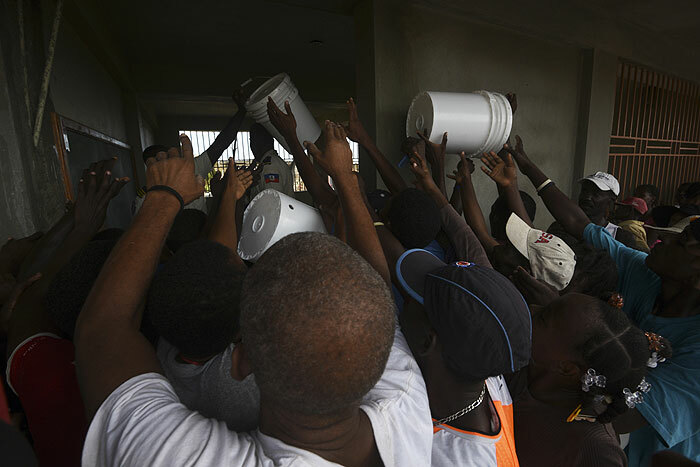 People raise their arms to get aid in Port-Salut, southwest of Port-au-Prince, on Tuesday. (AFP)

The soldiers also filled in water hazards on the route that residents had been forced to use for drinking water despite the risk of disease.

"Our mission here is to clear the way to allow the passage of humanitarian convoys," one of the soldiers told AFP.

But so far the main aid handouts were by American Christian groups.

One of them, Samaritan Purse, gave out boxes of hygienic products -- soap, shampoo, toilet paper -- and white buckets with water-purifying chlorine pellets in them. Three women carry relief supplies on their head in Port-Salut, southwest of Port-au-Prince

Desperate Haitians jostled, shoved and punched to get the boxes and buckets, despite Haitian police officers trying to keep order. Many were left empty-handed when the insufficient stock ran out.

"We're just trying to help the people most in need," said one worker at the site who declined to be identified because he was not an authorized spokesman.

He acknowledged a "security issue" with the distribution, but said that "at least the needed aid is getting out there."

"This is good, because we didn't have anything at all before," said one 23-year-old man, Jean Absolem, who had received one of the packages.

UN agencies including the World Health Organization and the World Food Program are poised to distribute their own, far bigger stocks of aid from Wednesday. A boy walks with goats past destroyed houses in a street in the small village of Labey, in the commune of Chadonyer

The WHO is sending a million cholera vaccine doses to Haiti to curb a spike in cases following the hurricane.

The WFP on Tuesday trucked in several tons of food to Les Cayes and said it would be distributing them early Wednesday in two of the coastal villages.

In more remote areas, though, the wait looked likely to drag on for a few more days.

In Ti Riviere, on a dirt side road not far from Les Cayes on the way to Groteaux, a group of young American and Canadian missionaries said they had been doing what they could since the hurricane struck, but their supplies were now almost exhausted.

"Hopefully we can get more aid here because the people need it," she said. "And pretty soon we're going to see a lot of desperate people."

Battle of the souls gets 10 African academy award nods