He tasked MPs not to pass laws that would threaten people's morality; but to fight heinous killings and murders.

He tasked MPs not to pass laws that would threaten people's morality; but to fight heinous killings and murders.

The Bishop of Masaka diocese, John Baptist Kaggwa, has tipped MPs on defending the national Constitution, saying it is a symbol of national pride.   Kaggwa made the remarks yesterday at Bishop Ddungu gardens at Nsambya at the quarterly year celebrations of the "Bannamasaka day"

Hundreds of faithful hailing from Masaka Entebbe, Kampala, Mityana, Mubende, Mukono, and other parts of Uganda, took part in the festivities.He said as the country marks its 54th independence anniversary, it is a milestone that should be respected.

"We are celebrating 54 years of our independence which shows that we have grown, we have peace and we have to keep it but not to change the Constitution for selfish reasons," Kaggwa said. He tasked MPs not to pass laws that would threaten people's morality; but to fight heinous killings and murders. "We should keep the national cake of every sector God has given us, use them befittingly and not sabotage development programs, so that the future generation can also benefit," Kaggwa said.

Kaggwa commended President Yoweri Museveni for his stance on education as one of the drivers of national development. However, he requested Government to pay attention to vocational schools, saying its products can spur the much-needed job creation, rather than the numerous jobseekers.

Kaggwa lamented that polythene bags strewn all over, damage the soils thus affecting agriculture production."Farming is one of the items which developing the country but the polythene bags have destroyed the land, It is almost impossible to plant anything in the soil," Kaggwa said.

He explained that the quarterly is for the Bannamasaka to see how to develop their diocese because no can help them unless they converge as diocesans. "These days, each Bishop must have some development and ensure financial sustainability of his diocese. The benefactors are long gone," the Bishop noted.

The diocese portfolio of investments include Jubilee House at Ben Kiwanuka street in Kampala, Bajasika building in Nyendo, Bishop Ddungu gardens for wedding and other parties ceremonies at Nsambya all these to help to the diocese." Kaggwa said.

Fr. Ssemwogerere cautioned against granting Masaka City status, saying it is still premature, as it could be a laughing stock as a 'city of rubbish'. He tasked the area MPs to spearhead the sanitation drive. 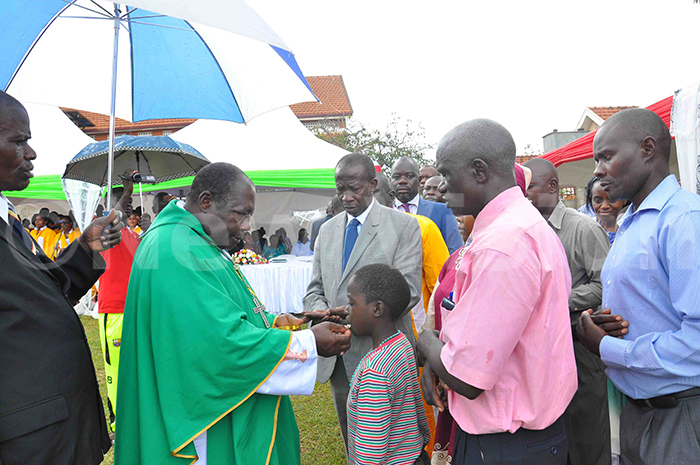 250 residents to get houses