Meeting the Swedish makers of a Ugandan-in...
Next Story

What I saw at G20 summit in Hangzhou

The writer at the G20 Summit in Hangzhou

We walked into this large hall and instantly attracted some attention. What could 27 journalists from Africa possibly be doing at the G20 summit in China's Hangzhou City?

Everyone knows G20 meetings bring together the world's 20 most powerful economies, and attendance by non-members is by invitation only. South Africa is the only African G20 member.

The 2016 summit would not just be a meeting for a small elite club, but rather collective pool of ideas to tackle pressing issues of our time, the Chinese foreign affairs minister, Wang Yi said. 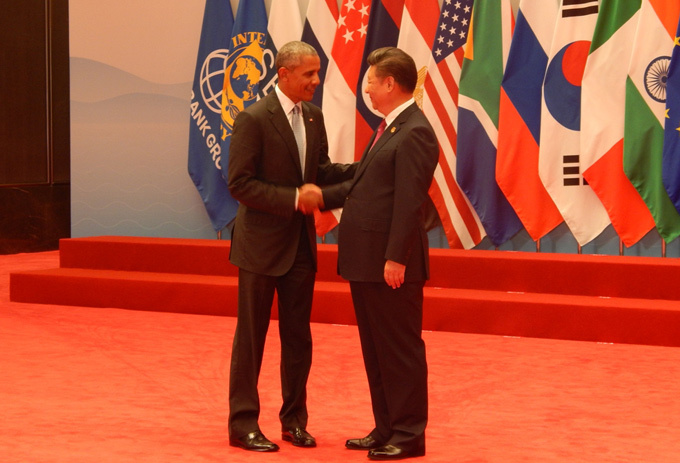 And so we walked into the media center at the gigantic Hangzhou Expo Center on September 3, a huge hall fitted with thousands of computers and teeming with journalists of all race and creed.

News anchors pacing about as they rehearse their lines; TV crews trying to capture a decent frame or scribes bumping into one another from time to time.

We watched world leaders jet in for the summit in all grandeur and repose, their arrival relayed on a giant screen on the first day.

Then there was a 45-minute opening gala choreographed at the West Lake by celebrated Chinese movie director, Zhang Yimou, a demonstration of the cultural and historical legacy of the city.

The city of Hangzhou was brightly illuminated by night and sparkling clean by day, with rows of green along major streets and suburbs. 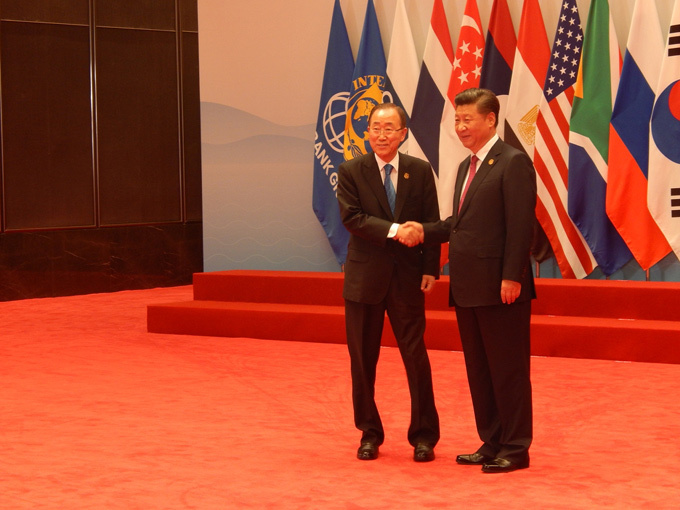 The Hangzhou International Expo Center, an iconic 850,000 square meter building located in the Xiaoshan district of Hangzhou would become the city's marvel as host of all formal meetings.

The most memorable moment came when a few of us were invited to take group photos of the world's most powerful men and women. We were about a dozen journalists in the meeting hall.

After about four hours of waiting, Chinese President Xi Jinping strolled into the room from the right and stood the centre, in front of 35 flags. The Chinese flag was in the middle.

Perhaps, this would come to symbolise China's new central position in global affairs. After all, ancient Chinese belief holds that the country is located at the centre of the earth.

First to walk in and shake hands with President Xi was UN Secretary General, Ban Ki Moon. A smile and pose to the cameras. It would be his last G20 Summit as head of the UN.

One by one the G20 members and heads of global institutions such as the International Monetary Fund and World Bank walked in to shake hands with Xi and exit before the group photo. Jean-Claude Juncker, President of the European Commission offered more than a handshake to his host-he chose a hug. A few months earlier, the EU announced anti-dumping duties on some steel imports from China, a move that threatened trade between the two economies. Maybe the hug was a sign of an uptick in relations.

It was, perhaps, German Chancellor, Angela Merkel who spent the longest time with Xi, inquiring about something from his host with the aid of an interpreter.

Backed by a salvo of camera shutters, US President Barack Obama strolled in, shook hands with his host and said a few words to his host before exiting.

China and the US are the world's largest economies. Their views and positions on trade, human rights, maritime and geopolitical interests have recently put them at opposite ends.

Credit to diplomacy, even in the face of recent hair-raising tensions including the dispute over the South China Sea, the leaders had time to share tea and talk in private.

More presidents walked in for the handshake: Russia, Japan, South Korea, South Africa, Brazil, Chad and all. Soon, they all returned to the room for a group photo.

Africa and the developing world

At the close of the summit, the G20 resolved to ‘set a new course for the global economy by putting in place favourable fiscal and economic policies," said President Xi at a briefing.

The ‘Hangzhou Consensus,' as it soon came to be known, resolved to pursue innovation in science and technology to revive global growth and fight corruption and irregular tax practices.

One of the significant outcomes was the ratification of the Paris Climate agreement by the US and China, driving up momentum that saw more than 50 countries sign up by end of September.

Slower growth of the global economy, an upsurge in terrorism, cyber-crime, protectionism and imbalances in trade and development would form some of the key topics at the summit.

With prodding from China, the G20 leaders agreed to pay attention to issues that affect Africa and a developing nation, particularly the 2030 Sustainable Development Agenda.

A month after the summit, the first to be hosted by China, the Hangzhou Expo Center is open to the public, who will each pay 150 yuan (sh15,000) per person for a tour of the venue.

What the leaders discussed behind closed doors, privately over the two-day summit may not be known for years to come. But the resolve to work together for the good of the world builds hope.

Pirates boss expects the team to return to form