World leaders bid farewell to Israeli elder statesman and Nobel Peace laureate Shimon Peres at his funeral in Jerusalem Friday, with US President Barack Obama hailing him as a giant of the 20th century.

Palestinian president Mahmud Abbas was among the mourners at the city's Mount Herzl national cemetery and was seated in the front row, reportedly at the request of Peres's family.

Abbas knew Peres well and negotiated with him. In an extremely rare move, he shook hands and spoke briefly with Israeli Prime Minister Benjamin Netanyahu upon arrival.

Security forces were on high alert, with roads closed and thousands of officers deployed.

"In many ways he reminded me of some other giants of the 20th century that I had the honour to meet: men like Nelson Mandela, women like Her Majesty Queen Elizabeth," said Obama, who wore a black Jewish skullcap.

Peres's death on Wednesday at the age of 93 drew tributes from around the world for Israel's last remaining founding father.

An estimated 50,000 people filed past his coffin as it lay in state outside parliament in Jerusalem throughout the day on Thursday.

Former US president Bill Clinton was among those who paid their last respects there, appearing moved as he stood in silence before the coffin.

Clinton had helped usher in the Oslo peace accords between Israel and the Palestinians in the 1990s, which resulted in the Nobel prize for Peres.

He also spoke at the funeral, giving a warm eulogy in which he said Peres's "critics often claimed he was a naive, overly optimistic dreamer. They were only wrong about the naive part."

Netanyahu, in his eulogy, called Peres a "great man of the world."

The two men had been political rivals, and Netanyahu recalled a late-night discussion on Israel's future with Peres in which they discussed security and peace.

"There will be peace, Shimon, dear man, exceptional leader," he said. "I tell you that from the bottom of my heart."

Obama, who has had a testy personal relationship with Netanyahu, however made a point of mentioning Abbas at the start of his eulogy and said his "presence here is a gesture and a reminder of the unfinished business of peace."

The funeral took place under a white canopy in the leafy national cemetery, where many Israeli dignitaries are buried.

Around 8,000 police were deployed for the commemorations. Preventative arrests of both Jews and Palestinians were made ahead of the funeral to avoid potential disruptions, police said.

The last time such an event was held in Israel was the 1995 funeral for Yitzhak Rabin, Peres's rival in the Labour party but partner in negotiating the Oslo accords.

Eulogies were completed before midday and Peres's coffin was lowered into his grave next to Rabin, who was assassinated in 1995 by a Jewish extremist opposed to the accords.

In a career spanning seven decades, Peres held nearly every major office, serving twice as prime minister and as president, a mainly ceremonial role, from 2007 to 2014.

He won the 1994 Nobel Peace Prize jointly with Rabin and Palestinian leader Yasser Arafat for his role in negotiating the Oslo accords, which envisioned an independent Palestinian state.

He was also an architect of Israel's nuclear programme, with the country now considered the Middle East's sole nuclear-armed nation, though it has never declared it. 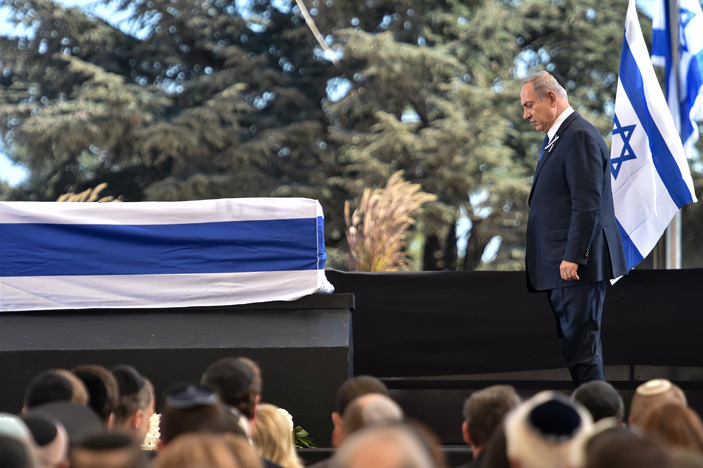 While Peres is hailed in the West as a peacemaker, many in the Arab world, including among the Palestinians, regard him a "war criminal".

They have cited his involvement in successive Arab-Israeli wars, the occupation of Palestinian territory and his support for settlement building before his work on Oslo.

He was also prime minister in 1996 when more than 100 civilians were killed while sheltering at a UN peacekeepers' base in the Lebanese village of Qana fired upon by Israel.

Islamist movement Hamas, which runs the Gaza Strip, condemned Abbas for offering condolences to Peres's family, saying it "disregards the blood of the martyrs and the suffering of the Palestinian people".

Abbas, who signed the Oslo accords along with Peres, however called him a "brave" partner for peace.

There have been very few tributes from Arab nations, though Egypt was represented by Foreign Minister Sameh Shoukry and Jordan too sent a minister.

They are the only two Arab countries to have signed peace treaties with Israel.

Born in Poland in 1923, Peres emigrated to what was then British-mandated Palestine when he was 11.

He joined the Zionist struggle and met David Ben-Gurion, who would become his mentor and Israel's first prime minister.

After leaving office as president, he had sought to maintain an active schedule, particularly through his Peres Center for Peace.

He was hospitalised in January for heart trouble, but said he was eager to return to work upon leaving.

In March, he met British supermodel Naomi Campbell at his Peres Center for Peace during an event linked to International Women's Day. On the same day, he met visiting US Vice President Joe Biden.

Despite his reputation as a statesman, Peres never managed to outright win a national election. Many in Israel opposed to the Oslo accords also blamed him for what they saw as their failure.

But in later life, especially during his time as president, he came to be widely embraced.