Nalugoye seeks help to travel to Germany for treatment

There is fear that unless better limbs are found, Nalugoye may be permanently paralyzed

There is fear that unless better limbs are found, Nalugoye may be permanently paralyzed

She first came to public attention in 2007, when her father made an impassioned appeal for assistance on her behalf. Then, Lilian Nalugoye, aged just nine years old, was struggling to get by. Born with one leg, young Nalugoye was already struggling to coordinate her movements. At school, she became a laughing stock. 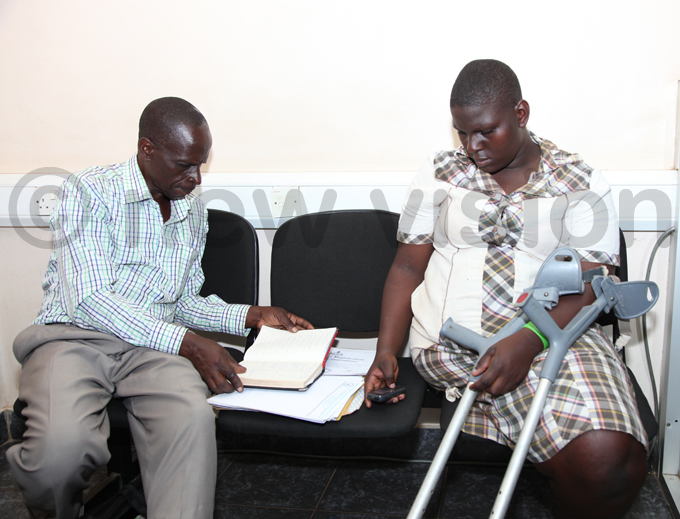 With assistance from the public, Nalugoye acquired a pair of crutches which enabled her to move on. Two years later, her fast-growing body had defied the crutches. While she could move about on them, it was becoming painful for her.

The public intervened and Nalugoye acquired a prosthetic limb. In 2011, she outgrew the limb. "It became heavy for her to lift," her father Eddie Ntambaazi says. Doctors found a new pair of crutches which she has been using since. These too can no longer support Nalugoye's growing body and need replacement.

Today Nalugoye is 18 years old in S.5 at Standard High school Zana (Bombo branch). She weighs more than 80kgs. Whenever she uses the crutches, her excessive weight exerts pressure on her upper arms, which according to doctors, affects her axillary nerve (the nerve that originates from the upper trunk at the level of armpit).

There is fear that unless better limbs are found, Nalugoye may be permanently paralyzed.

The need for the limb

This, according to Dr. Samuel Kayondo Nakibinge, a senior orthopedic technologist who worked on Nalugoye, may eventually lead to hand and finger muscle paralysis. Unless assisted, he says, this state could lead into spinal deformity for Nalugoye.

More fatal consequences of Nalugoye's continued reliance on crutches include wearing out of the foot, ankle, knee and hip joints in the short term. In the long term, this condition could lead to the following: early joints degeneration.

Nalugoye was born with one leg.

Development of flat foot and foot bone joints deformation/pain, over stretching of the knee and hip joint, skeletal muscular stress, obesity due to inadequate physical activities, other complications that accompany obesity and psychosocial effects.

All is not lost

Nalugoye still has a chance to reclaim her dreams if some Good Samaritans can help her raise 16,000 euro (sh60.6m) to cover travel, accommodation and feeding costs for her and an attendant in Otto Bock Health Care - a world-leading manufacturer and supplier of prosthetic limbs in Duderstadt, Germany.

After a passionate plea to President Yoweri Museveni for financial assistance to her daughter, George Ntambanzi was able to have all medical bills amounting to 25,270 Euros (about sh96m) covered by State House.

What remains now is the travel, accommodation and feeding costs for my daughter and a caretaker and I hope some Good Samaritans can come to our rescue before October 16, the date she is cheduled to be treated," he said.

A State House official who requested anonymity confirmed that Ntambaazi made a plea to the President for financial assistance to cover his daughter's medical bills in Germany. Her plea was considered and the money offered.

There is fear that unless better limbs are found, Nalugoye may be permanently paralyzed.

"We gave him that money because that is what he asked for. He told us, he would find ways of raising the bill to cover the other costs," said the official. Lt. Col Dr. Nekesa, the presidential advisor in health who assessed Nalugoye before State House could avail funds for her medical bills, was not available for comment.

Dr. Kayondo describes Nalugoye's condition as Amelia a birth defect with complete absence of one or more limbs.  This condition, he says results from prevention or interruption of embryo development between the first 3 - 5 weeks subsequent to fertilization.

He says Amelia is relatively rare. "Studies indicate that  it affects 1.41 per 100,000 live births (A total of 326 Amelia cases were ascertained among 23,110,591 live births, stillbirths and elective terminations of pregnancy for foetal anomalies from 1968 - 2006. In Uganda it occurs only once in several years."

For parents that have children with similar cases as Nalugoye, Dr. Kayondo the following tips are advised.