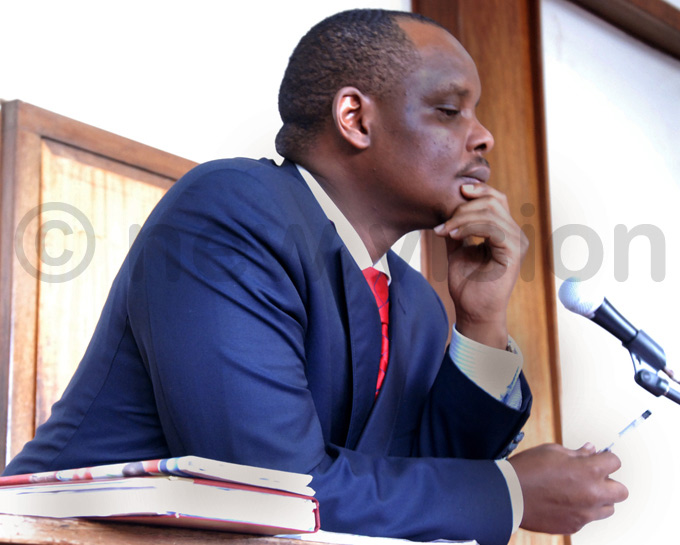 Court was reduced into a comedy arena when two top legal brains, Bob Kasango and  John Matovu, faced off, pinning each other on the theft of sh15.4b pension money.

Kasango was charged with the theft of sh15.4b in connivance with the equally embattled former three bosses of the ministry of public service and a court clerk.

It is alleged that in 2012, sh15.4b was paid to the Kasango's defunct law firm, Hall and partners, as legal fees, by Jimmy Lwamafa, the Permanent Secretary, Christopher Obey, Principal Accountant and Stephen Kiwanuka Kunsa, commissioner pensions, yet the money was meant for payment of pensions and gratuity of 6,337 former civil servants.

Together with Milton Mutegeyi, a court clerk, Kasango allegedly forged a certificate of order, costs and taxation against government for the payment of the money.

The payment was in regard to a civil suit involving 6,337 retrenched civil servants and government in 1998 for delayed payment of their pension.

Justice Vincent Kibuuka Musoke in his ruling in 2000 ordered the Government to pay them sh4.5m each, as damages. This totalled to about sh28b. 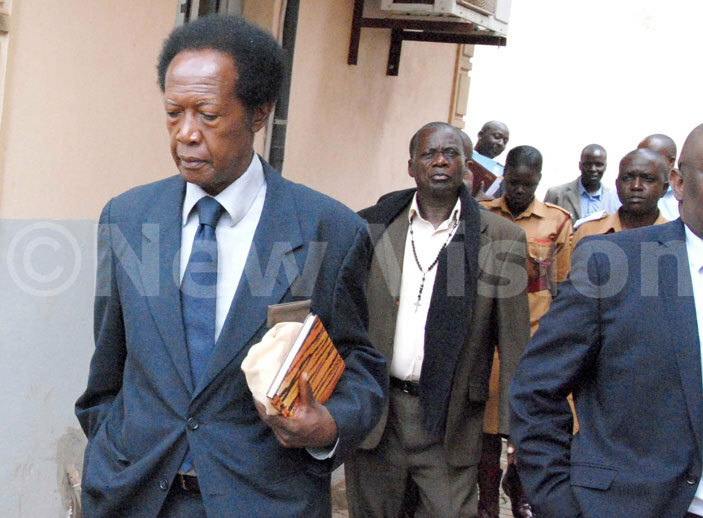 Former Principle Accountant in the Ministry of Public Service Jimmy Lwamafa with Stephen Kiwanuka Kunsa leaving the Court after pinning city lawyer, Bob Kasango of being behind sh15.4b.This was at Anti-corruption Court on September 28, 2016.Photo by Ramadhan Abbey

Matovu, who appeared as the first witness in the sh15b case, today, said before a fully parked court that Kasango, who he severally referred to as friend, is a brilliant lawyer who stole the money from the Government.

"You are so greedy, you even collected the costs plus interest yet I instructed you to collect only the legal fee which was sh4.2b (15% of the total sum awarded to pensioners)," matovu said.

He told court that in 2011, when it became hard for him to get his legal fees from the pensioners, he was instructed to get a lawyer who knew people who matter in the country and he consequently, contracted Kasango since he fitted the description.

He said after signing a memorandum of understanding and filing a bill of cost of sh3.9b, he told Kasango to take over the process of claiming for legal fees.

Matovu said that in November, Kasango started giving him money in bits and packed it with 'sweet' lies that the Ministry of Public Service was taking long to remit the money, but since he (Matovu) was his good friend, he decided to loan him the money.

He stated that when he heard about the sh15.4b fraud, he embarked on an investigation which led him to a shocking discovery that Kasango forged several documents and defrauded the Government of sh15.6b.

"I was shocked that instead of collecting the money I had instructed him, he collected sh15.4b. What was more appalling was that he had done a certificate of taxation and order against government claiming for payment of costs as if he was party to the case," he said.

Other documents Kasango allegedly forged are, a notice of joint instruction of advocacy, demand letters, certificate of two counsels and bill of costs where he doubled the costs from sh3.9b to sh7.8b.

He stated that when he confronted Kasango with the facts, he gifted him with a Land cruiser V8 which costs about sh350m and promised to pay back all the monies due to him.

However, in a heated exchange during cross examination, Kasango accused Matovu of lying to court and conniving with Justices Eudes Keitirima to frame him in the theft. He said that he paid him all his money

"I am pained because you and Keitirima put me into this crime. Remember at Protea, you brought me the documents fully signed by Keitirima and you said that as per the deal, he was to receive sh500m," Kasango said.

Before the hearing could end, Kasango sneaked out of court when he heard that Matovu has four warrants of arrests against him and was only waiting for an opportunity to present itself. The case continues.