The political arena this year has witnessed mobility in bilateral relations between the two countries and the most important one was the visit of President of the Republic of Uganda, Gen. Yoweri Kaguta Museveni, to the Kingdom of Saudi Arabia on December 13 – 14, 2015

The political arena this year has witnessed mobility in bilateral relations between the two countries and the most important one was the visit of President of the Republic of Uganda, Gen. Yoweri Kaguta Museveni, to the Kingdom of Saudi Arabia on December 13 – 14, 2015

On, Thursday, September 22, 2016, the Embassy of the Royal Kingdom of Saudi Arabia in Uganda celebrated its national day at Serena Hotel Kampala. The function was presided over by Hajjat Janat Balunzi Mukwaya, the Uganda's Minister of Labour, Gender and Social Development. Below is the speech of the Ambassador, Dr. Jamal Abdul Aziz Raffa at the function.

First of all, I am pleased to thank and praise Allah for the completion of the pilgrimage and return of the pilgrims to their home countries after performing their rituals with ease, which was due to Allah's grace then the grace of people who were truthful to what they promised Allah.

The history over decades has consistently witnessed what the rulers of this country have been used to, in terms of serving the pilgrims and visitors of the Two Holy Mosques and in this regard they have indeed spent dearly to elevate the privilege of providing services.

However, this speech and occasion may not be enough to explain these solemn acts carried out by the Government of the Kingdom of Saudi Arabia since its unification by the late King Abdul Aziz Bin Abdul Rahman Al Saud and his successors after him the Kings and Lions of this Kingdom, but it is enough to see a necklace around the neck.

What rises exclamation and regret point is the existence of groups and states that take advantage of horns to overcome the voice of righteous by the voice of falsehood. However, these are only sounds of the dissonant, who proved their intellectual bankruptcy, which resented the Muslim community at a time when it was incumbent upon the Muslim nation to unite by ignoring the violent practices of some countries, like killing, blood shading and turning women into widows.

All these started openly and were not a secret to any person of prudent mind. The history will continue to write in its records on these shameful terrorism acts just like it was written earlier in the history of the Qarmatis "Qaramitwa" who profaned and shed blood in the Holy Mosque of Mecca in 908AD. We do not need any dispute or manoeuvre of the supervisory role played by the Government of Saudi Arabia, which has been witnessed by both the ones who are far and those who are near and whoever tries to dispute it, we ask them to bring their proof. We may also ask ourselves what the secret behind the success of this year's pilgrimage is. In that context, I reassure the keenness of my Government towards serving and hosting all pilgrims including the Iranian pilgrims who were prevented by the Iranian authorities to perform Hajj despite the acceptance of my Government of their demands.

How much is the demand in our lives….is it giving priority to the power of culture against the culture of power, so that we live in a world of peace, security and away from legitimising erroneous special interests.

The constitution of my country confirms the importance of non-interference in the affairs of others and from this point, we do not allow interference in our affairs and we are very keen that the relations between us and the world is built on mutual respect and development of relations to serve the common interests between countries and peoples.  The Kingdom of Saudi Arabia is steadily moving in its relations both at international and internal foras to build and develop the state and its people, knowing that the Vision 2030 is there only to confirm that the pace is kept up with global changes and challenges.

Saudi-Uganda relations:
The political arena this year has witnessed mobility in bilateral relations between the two countries and the most important one was the visit of President of the Republic of Uganda, Gen. Yoweri Kaguta Museveni, to the Kingdom of Saudi Arabia on December 13 - 14, 2015 and met with the Custodian of the Two Holy Mosques, King Salman Bin Abdul Aziz Al Saud, the Crown Prince His Royal Highness Prince Muhammad Bin Nayef Bin Abdul Aziz Al Saud (May Allah protect them) and held talks on issues of common interest between the two countries.

This visit led to strengthening of relationships and emphasised the mutual interests between the two countries. During this visit, President Museveni also met with Dr. Ahmad Muhammad Ali, the President of the Islamic Development Bank (IDB) and H.E Iyad Madani, Secretary General of the Organisation of Islamic Cooperation (OIC) as he also met with a number of Saudi businessmen and discussed with them opportunities of investing in Uganda.

President Museveni concluded his visit by meeting His Royal Highness Prince Sultan Bin Muhammad Al Kabeer, chairman of the Saudi company of Almaraai, where they discussed the importance of sharing experiences which were so appealing to President Museveni due to what this company is renowned for in the field of agriculture, diary and food, where its considered the pioneer in this field.

The arena also witnessed exchange of visits between officials from both countries, which included the visit of Adil Al Jubair, the minister of foreign affairs of Saudi Arabia who visited Uganda on March 24, 2016 and met with President Museveni and held talks on common issues between the two countries.

These included the fight against international terrorism and attracting Saudi businessmen to come and invest in Uganda to serve the common interests, as it also witnessed a visit by the former Ugandan Minister of Labour, Gender and Social Development, Muruli Mukasa, to Saudi Arabia and met his Saudi counterpart, Minister of Labour Dr. Moufarrej Hagbani and exchanged talks on the agreement of labour export from Uganda to Saudi Arabia.

However, some people have exploited the agreement through their pens to offend and abuse the Kingdom of Saudi Arabia without verifying the rumours that had been circulating in the press to know whether they are true or not, ignoring the fact and actual positive yield of the exporting labour to Saudi Arabia and its contribution to reducing the unemployment rate in Uganda which exceeds (4.5) million people and the fiscal revenue for such employment.

We wish to stress that, the Government of the Kingdom of Saudi Arabia has equally guaranteed the rights of citizens and residents and the major proof to that effect, is that it hosts on its territory more than 10 million people of different nationalities, professions and the business for which they came to do in the Kingdom of Saudi Arabia, in order to work and contribute to advancing development. It is important to note that some had to stay more than decades and that was not supposed to be so if they were not sure of the guarantee of their rights in this country. 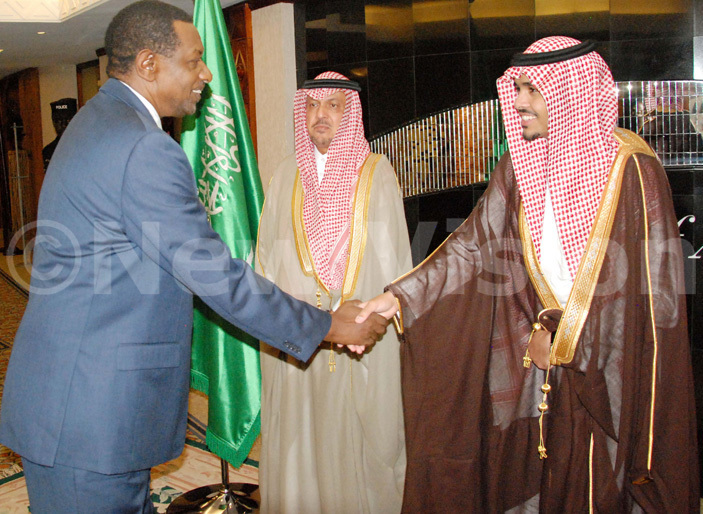 The Rwandan ambassador to Uganda, Frank Mugambage shakes hands with the deputy ambassador of Saudi Arabia to Uganda, Rakan Mousa Albrikett, as HE the Ambassador Dr. Jamal Abdul Aziz Raffa looks on.

The Kingdom of Saudi Arabia handles international issues, especially the issues refugees from the principles of the Islamic religion, which calls for peace and preservation of the lives of innocent people and is keen to helping the needy.
However, in extension of its humanitarian role in this area, it has been since its inception keen to establishing humanitarian rules until the Kingdom of Saudi Arabia became today in the third place among the nations of the world in terms of the amount of relief, humanitarian and developmental aid, which reached about $139b to 95 countries during the past four decades, which represents 2% of its national income.

In a bid by the Custodian of the Two Holy Mosques, King Salman bin Abdul Aziz Al Saud (may Allah protect him) to unite the Saudi relief aid and humanitarian efforts to support the needy countries, the idea of creating King Salman Centre for Relief and humanitarian action came in order to reflect the bright humanitarian role of the Kingdom of Saudi Arabia in the world.

At the international level, the Kingdom of Saudi Arabia has been and still continues to be important party and key player in ensuring and achieving international peace to rid the entire world of terrorism, mainly the (ISIS - Daesh) or who were called by the wise men (obscene). It is important to note that, terrorism has no country or state.

Last but not least, I wish to reiterate my thanks and those of my colleagues members of staff of the Embassy to those who attended this function and I express my thanks and appreciation to the Ministry of Foreign Affairs of the Republic of Uganda and all Government agencies in this friendly country for what the Embassy and its staff received including good co-operation which enabled it perform its duties optimally.

Today, we are celebrating the Saudi National Day and after few days, we shall be celebrating the Uganda Independence Day. On this occasion, I am pleased to congratulate the Government and People of Uganda, wishing further progress and prosperity for this country and its friendly people.
Long live my country proudly among nations.

Uganda ready for Kenya sides in 7s on the Nile tournament

Odongkara bounces back as referee boss