Augustine Ojobire and Robert Mayanja the eastern coordinator and deputy national coordinator of the Jobless Brotherhood respectively accused of branding Speaker of Parliament Rebeeca Kadaga a pig have been remanded to Kirinya Prisons until Thursday. 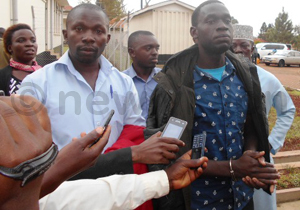 The duo pictured at court on Tuesday. Photo by Doreen Musingo

They were remanded by John Frances Kaggwa the Jinja chief magistrate who denied them bail saying he will pass his ruling on Thursday.

Kaggwa heard that Ojebire, 27, a resident of Walukuba in Jinja Municipality and Mayanja, 36, a resident of Nakawa in Kampala during a radio talk show on NBS Radio incited violence in the general public against the speaker Kadaga.

However the accused denied the allegations and asked court to grant them a non cash bail since they were not violent and also jobless.

Shamim Nalule the state attorney said even if the duo incited non-physical violence, when given bail they would further incite more violence in the public.

Nalule accused them of being non cooperative during arrest and rejecting to make statements while at Jinja Central Police Station.

"If given bail they will proceed with their behaviours in public, they were uncooperative to Police and also have other pending cases to answer of common nuisance," she said.

"It's our humble submission that if released on bail they shall commit other offences yet investigations are not complete" she said adding that the duo will put court at risk of wasting tax payers' money incase they fail to return to court.

She noted that two of the sureties lacked the basic backgrounds of the accused persons and thus are bound to fail in presenting them in court.

Norman Tumuhimbise the national coordinator of the Jobless Brotherhood urged members to remain calm but said this will not stop them for fighting for people rights.