Heavy duty vehicles and their effect on traffic flow in Kampala

A heavy goods truck heading for the city on Jinja road

On the face of it, they play havoc with the flow of traffic on most of the roads. In Kikuubo, heavy trailers inconvenience the traders operating in the open narrow alley way as they are driven through from the business district's entry point that starts at mini price and ends at Apollo Kaggwa road.

Drivers who ply that route on a day in, day out basis can attest to the chaos that occurs when heavy duty vehicles get entangled on that intersection and on the stretch leading up to Ntinda. 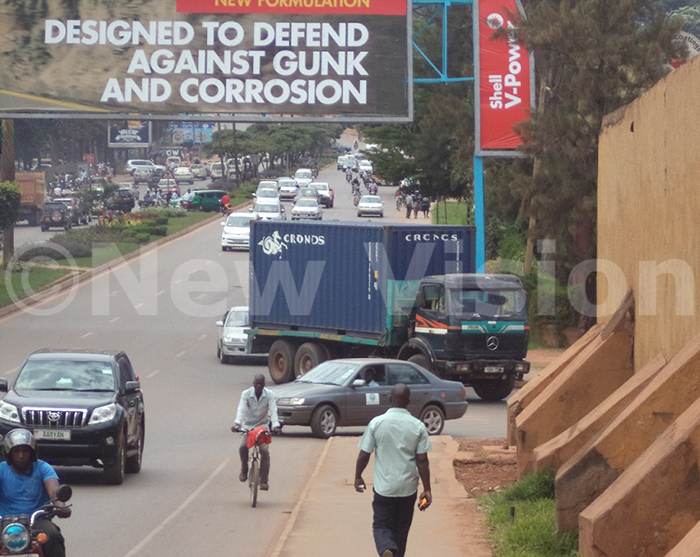 Other per-urban areas and intersections around the city have also invariably been inundated when heavy goods vehicles join the inevitable gridlocks that build up during rush hours.

The Nakawa-Ntinda stretch is particularly overwhelmed by heavy duty trailers, delivering goods to nearby warehouses, principally those neighboring the Naguru Police quarters near the spear Motors junction.

Drivers plying the Nakawa- Ntinda road stretch also have to contend with another traffic nightmare in the repeated hold up of traffic around the spear motors junction for long periods by the traffic police, stationed there.

"There is recurrent congestion on that road during peak hours. On my back and forth movements from home to work and from work to home, I regularly witness how slow moving trailers put a damper on the flow of traffic on the road and how the gridlock the trailers cause agitates drivers, especially taxi drivers, who as everybody knows are always in a rush to overtake and to get ahead of other vehicles," Fred Koire a frequent driver on the Nakawa-Ntinda road says.

‘Heavy vehicles including trailers, buses and trucks are known for their significant effect on traffic flow due to their larger dimensions and inferior performance on the road compared with an average automobile.

They slow down traffic flow and damage roads, hence increasing the cost of road infrastructural maintenance. If plans drafted in 2010 by the Ministry of Works and Transport to have heavy vehicles kept out of the city centre were put into execution, the problem would have probably been solved.

That the ban only lasted a few weeks and vehicles were back on the road speaks volumes of how ineffectual our policies and priorities as a country are," Charles Tumuhaise, a public transport consultant explains.

Environmentalists have also been quick to point out that the increase in the number of heavy duty vehicles on the city's roads has inherently been accompanied by increase in congestion, pollutant emissions and energy use as well as road infrastructure overuse, all of which have broad societal implications.

"The emissions of these heavy duty vehicles contribute markedly to global warming and have significant implications for the health of many city residents living along the traffic corridors," David Okwalinga, an environment scientist says.

Robert Kalumba, KCCA deputy spokesperson says the authority intends to restrict heavy vehicles in certain areas of the city in due course.

Recently as well, KCCA made a media proclamation to the effect that it was coming up with a new law restricting vehicles exceeding 4 tonnes from moving or parking in the city's central business district.
Vehicles that contravene the above directive will reportedly be liable to pay a fine to the tune of ug shs 4 million.
The new law will also reportedly prohibit the offloading and loading of vehicles in the central business district.

EARLIER MEASURES TO KEEP HEAVY VEHICLES OUT OF THE CITY

The northern bypass road was built to free the city from traffic jam, but to all appearances, it has not worked."Much as there are heavy vehicles using it, most trailers prefer using the Kinawataka route that leads them to Nakawa and Bugolobi. It is those trailers that partly cause the jam around the Nakawa-Ntinda intersection.

The primary objective for the construction of the northern by pass was to divert some traffic generated by the heavy trucks away from the city centre but unfortunately that has not happened. The authorities concerned should refocus their efforts towards solving this problem as it will be vital for averting traffic gridlocks and road accidents on our roads, principally those in the city and those leading up to the city," Tumuhaise says.

Ali Muteza, the chief executive officer of the road safety initiative says to control the problem of heavy duty vehicles causing traffic jams on Kampala roads, there should be a proscription on their movement.

"On the roads where they are often many and where they cause problems, there should be a ban on them especially during traffic heavy peak hours in the city such as 7-9 am in the morning and from 5-9 p.m in the evening," Muteza says.

"They travel at crawling speeds considerably lower than the speed of normal passenger cars. That in itself can trigger a slowdown in traffic movement.
Heavy vehicles also take up large spaces on the road and can be a danger to other road users especially those cars that drive behind them on climbing lanes.

The other thing that should be known is that heavy vehicles especially trucks and trailers have inferior acceleration performance principally during stop-and-go conditions, or upon leaving the front end of a traffic hold up queue," Justine Opus, Assistant Superintendent of Police, Central Police Station says.