Guangzhou: a lifeline for many Ugandan tra...
Next Story

Crop-spraying drone could save costs, time

Named ‘Agras MG-1,’ eight-rotor drone can haul more than 10 kilograms of pesticides or fertilizers and can cover up to 10 acres per hour.

Named ‘Agras MG-1,’ eight-rotor drone can haul more than 10 kilograms of pesticides or fertilizers and can cover up to 10 acres per hour.

Crop pests and diseases are some of the biggest hurdles for most farmers. The traditional way of fighting the little beasts is the use of a spray pump carried on the back.

A Chinese tech firm DJ has developed a smart, crop-spraying agricultural drone that could see a shift from handheld to aerial spraying, enabling farmers who use it to save time and costs.

"It is about 40 to 60 times more-efficient than manual spraying," says Oliver Wang, the DJI public relations director during a tour of the tech giant's showroom in Shenzhen, Guangdong Province.

Named ‘Agras MG-1,' eight-rotor drone can haul more than 10 kilograms of pesticides or fertilizers and can cover up to 10 acres per hour.

The drone can fly up to eight meters per second and guarantees efficient coverage of the area by matching its spraying intensity to flying speed.

It is dustproof, water-resistant and easy to fold and store after use. It is made of anti-corrosive materials such as carbon fiber that can be rinsed clean.

According to Wang, the new drone relies on micro ware radar that helps the drone to uniformly spray the crops in the right distance and cover every part of crops. 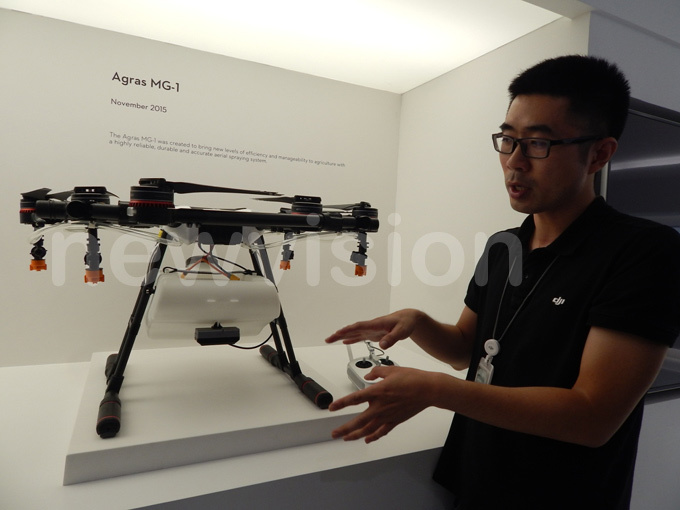 An advanced flight control system ensures that the drone maintains height and distance from plants to guarantee accurate application of pesticides.

The drone's intelligent memory function means after the Agras MG-1 is brought back to base for refill or recharge, it will return to its last memory point to pick up spraying where it left off.

Users control the Agras with a custom DJI remote. Its low-energy display panel gives real-time flight information and lasts for extended periods on a single charge.

With a remote control distance of 300 metres, the drone can linger in the air spraying the field for up to 22 minutes at a time.

The Agras MG-1 is gradually being rolled out to markets across China and Korea, after which it will be available in foreign markets at a cost of about $10,000 (sh33m).

Drones, known technically as ‘Unmanned Aerial Vehicles (UAVs),' have traditionally been developed for military, surveillance, recreation or media work such as film or photography.

The use of drones for agriculture is gaining attention in developed countries, where farmers using them apply low insecticide bait, scout farms, guide herds of cattle or survey corn fields.

Globally, the Chinese firm DJI commands about 70% share of the world's drone market, much in part due to the popularity of the Phantom series.

You can make great music at home

You can make great music at home